From the Theatrical Vault Dept.: At the beginning of 2019, the 92-year-old Hal Holbrook announced that he was retiring his one-man show, “Mark Twain Tonight,” probably the grandaddy of all solo shows, and certainly the one most people think of when they consider the genre. Holbrook performed it for 63 years, accumulating enough material – all truly culled from Twain – that he could vary his performances at will. Now, a year after that announcement, Holbrook has joined Twain in wherever it is such talents posthumously meet. Here’s my review of an appearance in Schenectady 35 years ago.

HAS HAL HOLBROOK’S ONE-MAN SHOW “Mark Twain Tonight” been overexposed? It’s been on TV, there was a commercial recording, and his presentation of it at Proctor’s Theatre Thursday evening was his third Twain appearance there. 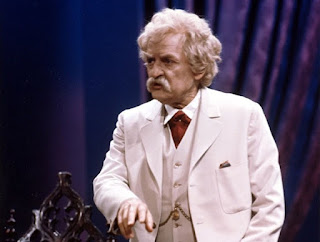 Well, there are those, such as myself, who hadn’t seen the act before. And, based on the excellent quality of it, there must be those eager to see it again.

Because of the nature of the show, it is possible for Holbrook to vary his material so he has the freedom of a stand-up comic to play to the particular house he is addressing.

But that improvisational nature is tempered by the material itself: it’s all Twain’s. It’s up to the actor to affect transitions and delivery but he must be true to his sources.

What binds these elements is the character Holbrook plays. By now you know the complicated and lengthy make-up procedure: you’ll even find it in theater textbooks. Add to that the suit (about which he does a routine during the show), the cigars (ditto), the voice and manner of the 70-year-old croespatch and it really seems as if Twain himself were back to play the circuits.

Like Shakespeare’s Cleopatra, age isn’t withering Twain’s material. His comments on politicians, lawyers, war, etiquette, sloth, and the like are as relevant as ever. Even the antique aspects of life in Hannibal and Hartford are at least charming.

With more than 30 years of familiarity with the material, Holbrook is a virtuoso at choosing what comes next. A high point of the evening was the extended passage “read” (actually delivered from memory) from “Huckleberry Finn,” in which Holbrook impersonated Twain impersonating Huck, who then impersonated his father.

The program lists a variety of topics, a sort of buffet of material with sources credited. We heard about early travels, German opera, the Sandwich Islands, insurance, shoveling sand, the accordion, working as a reporter “because I couldn’t find honest employment,” bicycle riding, Sunday School, and much, much more.

The only weak point of the show occured just before the finish, when a reprise of early reminiscences failed to top similar material presented in the first half. It’s been a recent custom for comedians to close the show on a wistful note: nobody could do that better than Twain, whose sentiment is never bogged down with bathos. Holbrook might devise some new conclusions to show the youngsters how it’s done.

But all in all, this is an act that deserves to endure another 30 years. Look at it this way: the longer Holbrook continues to do it, the less time he’ll have to spend on makeup.