From the Food Vault Dept.: I ended the year 2008 with a review of an Albany-area diner, the Metro 20. Two years later, it changed hands and changed name, and endures today as the Capital City Diner. I can’t tell you about its current incarnation, although re-reading the pieces below do inspire a longing for the post-Covid world when I can check out such eateries without worry. I’ll bet you’re feeling the same way!

IT’S BEEN JUST OVER A DECADE since the Metro 20 Diner put down stakes – or, as it looks at night, neon ablaze, dropped from deep space – on Western Ave. not far from Crossgates and the Northway intersection. As far as architecture is concerned, it’s about as handsome a diner as you’re likely to find north of New Jersey, and the glitter of the exterior is carried onto the inside walls, with art deco poster-style motifs.

That you can get breakfast items at all times the diner is open reinforces a certain otherwordliness about it. You can lose your sense of time here, as you do in a gambling casino. Although the Metro 20 closes at midnight or 1 AM, arrive after dark and it feels like four in the morning. Even daylight visits make me feel as if I’ve pulled an all-nighter, but that has more to do with my decades-long tradition of shoveling eggs and sausage into myself after staying up all night than it does with the diner itself.

I visited with my family in 1998, when that family included a one-year-old. It was, and remains, a good place to bring kids. Its spacious enough to accommodate a range of customers in a range of stations, although customers tend to be consolidated in a dining area during the slower stretches.The old-fashioned diner sported little more than a counter and a handful of tables, often housed in a converted railroad car. As such facilities grew, the name “dineraunt” was coined to signify the incorporation of regular restaurant fare.

Food purveyors like Sysco make so many items available in frozen or Cryovac packaging that it’s possible to offer an expansive menu without the attendant preparation; thus the seemingly limitless choices.

Metro 20's menu – large, laminated, bordered in pink – welcomes you with a page-long listing of wine, beer and cocktails. There’s a weekday afternoon (2-5) dinner special that gets you soup or salad and an entrée with dessert and coffee at half price, and the specials include roasted chicken or turkey, meat loaf, broiled scrod, fried clams and more, priced from $10-$13.

Appetizers range from a $3 plate of fries to an $11 sampler of wings, potato skins, mozzarella sticks and chicken fingers; nachos, fried ravioli, jalapeño poppers, chili and calamari are among the others.

Then the you face the real decision. Sandwich? Burger? Full dinner? Breakfast? The specialty sandwich list offers chicken souvlaki on pita ($7.75), Philly cheese steak, tuna melt or French dip for $8, London broil sandwich for $10 and a NY steak sandwich for $14, each with a side of fries. Six-ounce hamburgers start at $4.75; once you’ve piled on cheese and bacon and added fries or rings, you’re paying $8.35. And there are many more sandwiches, including wraps ($8), triple-deckers ($8-$9) and traditional deli combos (around $7).

We ordered a grilled chicken Caesar wrap (served with good fries, $8), and were served a generously overstuffed sandwich with a nice flavor, but one that had picked up enough heat to wilt the component lettuce.

And then there are still three pages of dinner choices! Our options were narrowed during a recent visit, when we were informed right away that none of the sautéed items would be available – that station closed at 8:30, a half-hour before our arrival.

So no chicken Sinatra (it’s sautéed with sliced eggplant, prosciutto, roasted peppers and mozzarella, $16), no sole Française ($17), no veal pizzaiola ($17), no fusilli misto (sautéed chicken and sundried tomatoes tossed with spinach and prosciutto and pasta, $16). A page of options gone.

Ten years ago I reported that no meatloaf was offered. This has changed. The meatloaf is listed as a “chef special,” served with potato and vegetable ($10). It bears no resemblance to any meatloaf I’ve tasted before, and not in a good way. Three large (I do mean large) patties emerged, bearing grill marks, covered in a very thick mushroom-studded gravy. The patties themselves, buoyed by breading, had only a fleeting flavor of meat. The gravy also topped a side of bland, processed mashed potatoes. My monkey-dish of peas travelled from can to table with a stop, I’m suspecting, at the steam table to collect a little heat and shed the last of its color.

Earlier, I flew through an appetizer serving of fried zucchini sticks, served with a marinara dipping sauce ($5.25), so I wasn’t going hungry. Which was why it was only after I left the diner that I realized the salad included with my dinner had never arrived. Nor was the menu-promised bread and butter ever served.

Among the Italian specialties are chicken or veal parmigiana ($13 or $17); meat-intensive entrées include pork chops ($14), lamb chops ($16) and a NY strip ($18), and there is a bounty of seafood offered, stuffed, broiled or fried ($13-$19). Roasted turkey ($13) and beef liver ($10) give an old-fashioned feel to the offerings, but the example of the roasted half spring chicken ($12) suggested that the bird itself had reached an autumnal stage, dry and chewy with a stiff, tough stuffing.

The star of the meal was the matzoh ball soup ($2.75 or $3.50), which could have come straight from the Edison Hotel in Manhattan and boasted an unusually good broth and a well-textured dumpling.

There’s nothing bashful about dessert here. Although the display counter showed many an empty space, those cakes and pies that remained were tall with frosting or filling and sliced generously thick. We shared a piece of chocolate layered cheesecake ($4), which was gooey and sweet and otherwise unremarkable.

You get a secure, comfortable feeling from servers who make that extra bit of effort to ensure a good dining experience. Such wasn’t the case here. I had the feeling that the nicest thing we did for the servers was settle up the tab and depart.

IT’S NEW, IT’S RETRO. It’s a diner and a diner concept. It’s a spanking clean chrome and glass spaceship that landed on Route 20 west of Crossgates, shooting a muted green glow into the sky to beckon us through its glistening

We responded to that call. We visited on a recent Tuesday night. We snagged the last spot in the parking lot. Inside wasn’t as crowded as the lot suggested, and a four-top was available for my wife and daughter and me, allowing us to spread out our child maintenance paraphernalia. That the restaurant is child friendly was proved by our neighboring tables, at which other small children slithered and seethed.

Why a diner? What’s the promise behind all that chrome? I think of it in one word: meatloaf. Your classic diner is open early, open late, sports an oversized sugar dispenser on each table and offers a meatloaf plate with gravy that you also can get ladled over your fries or mashed potatoes. Where I grew up, during the Vietnam War era, whenever someone from my town went AWOL he was found at the diner. It was what we all wished home could be.

Chances are, somebody in that kitchen knew some down-home cooking, and a good meatloaf recipe is to be as prized at that great tomato sauce or the unbeatable goulash your grandmother taught you to make. Diners presuppose informality. You’re here for sustenance and some socializing, not a five-course gourmet meal.

Which brings us to the Metro 20's problems. It’s not as homey as I prefer, and the food is not reliably good. Had this been housed in some existing building, I wouldn’t be so critical about the hominess. There are plenty of diners in the area, most of them massive dineraunts that are no more homelike than an auto showroom. But Metro 20 is a brand-new edifice that screams old-fashioned.

Green or violet pastels dominate the colors inside, with chrome trim and art deco sconces on the walls. Behind the main dining area is a large mural sporting a stylized scene of formal dining, a backdrop that wouldn’t look out of place in a Noel Coward play. 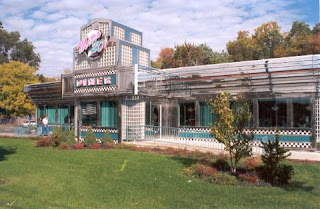 Diner menus jeer at the idea of certain items at certain times of day. Recognizing that diners are the haunts of nonconformists, breakfast usually is available at all times, which is the case at the Metro 20. Comfort food also is important, so hamburgers in various states of dress are featured. And, of course, all manner of broiled, baked or fried seafood, a column of Italian dishes, a bunch of salads (including the ubiquitous Greek and Caesar variations) and lots and lots of sandwiches.

Service was friendly and accommodating, but none of the servers I spoke with had any feel for the food coming out of the kitchen. I was left to my own devices. I ordered a chicken special. My wife ordered a Reuben. We also got some soups. Here’s our report.

Susan’s chicken soup was very good, built on a flavorful stock with hand-cut vegetables within. My onion soup was all bread, onions and mozzarella cheese. Stock had been sucked up by the bread. I ate it with a fork. We ordered a plate of spaghetti for our one-year-old, meatball on the side. Pasta and tomato sauce were fine, but the meatball was another victim of bread incursions.

The Reuben sandwich was just as expected, reassuring in its familiarity, generously stuffed with corned beef, served with french fries and cole slaw. There being no meatloaf on the menu, this would be my substitute. Except that I ordered the stuffed chicken. Which was an oven-toughened breast filled with breading, over which clung a way-too-sweet black cherry sauce. Mixed vegetables were watery, mashed potatoes were terrific.

In other words, the meal was totally unpredictable. Obviously, the kitchen is capable of good things, but we saw too much of its other side for my comfort. We didn’t sample any of the home-made baked goods, but they look formidable, and I suspect they’ll satisfy any sweet tooth.