Guest Blogger Dept.: We’re hurrying O. Henry back into the fray in order to set the holiday mood for us. He did it brilliantly in his most beloved tale, “The Gift of the Magi,” but that also has overshadowed another of his contributions to the season. Enjoy for its atmosphere and tone of voice; who knows where the plot may have gone had the author finished it.

NOW, A CHRISTMAS STORY SHOULD BE ONE. For a good many years the ingenious writers have been putting forth tales for the holiday numbers that employed every subtle, evasive, indirect and strategic scheme they could invent to disguise the Christmas flavor. So far has this new practice been carried that nowadays when you read a story in a holiday magazine the only way you can tell it is a Christmas story is to look at the footnote which reads: (“The incidents in the above story happened on December 25th. – ED.”)

There is progress in this; but it is all very sad. There are just as many real Christmas stories as ever, if we would only dig ‘em up. Me, I am for the Scrooge and Marley Christmas story, and the Annie and Willie’s prayer poem, and the long lost son coming home on the stroke of twelve to the poorly thatched cottage with his arms full of talking dolls and popcorn balls and – Zip! you hear the second mortgage on the cottage go flying off it into the deep snow.

So, this is to warn you that there is no subterfuge about this story – and you might come upon stockings hung to the mantel and plum puddings and hark! the chimes! and wealthy misers loosening up and handing over penny whistles to lame newsboys if you read further.

Once I knocked at a door (I have so many things to tell you I keep on losing sight of the story). It was the front door of a furnished room house in West ‘Teenth Street. I was looking for a young illustrator named Paley originally and irrevocably from Terre Haute. Paley doesn’t enter even into the first serial rights of this Christmas story; I mention him simply in explaining why I came to knock at the door – some people have so much curiosity.The door was opened by the landlady. I had seen hundreds like her. And I had smelled before that cold, dank, furnished draught of air that hurried by her to escape immurement in the furnished house.

She was stout, and her face and hands were as white as though she had been drowned in a barrel of vinegar. One hand held together at her throat a buttonless flannel dressing sacque whose lines had been cut by no tape or butterick known to mortal woman. Beneath this a too-long, flowered, black sateen skirt was draped about her, reaching the floor in stiff wrinkles and folds.

The rest of her was yellow. Her hair, in some bygone age, had been dipped in the fountain of folly presided over by the merry nymph Hydrogen; but now, except at the roots, it had returned to its natural grim and grizzled white.

Her eyes and teeth and finger nails were yellow. Her chops hung low and shook when she moved. The look on her face was exactly that smileless look of fatal melancholy that you may have seen on the countenance of a hound left sitting on the doorstep of a deserted cabin.

I inquired for Paley. After a long look of cold suspicion the landlady spoke, and her voice matched the dingy roughness of her flannel sacque.

Paley? Was I sure that was the name? And wasn’t it, likely, Mr. Sanderson I meant, in the third floor rear? No; it was Paley I wanted. Again that frozen, shrewd, steady study of my soul from her pale-yellow, unwinking eyes, trying to penetrate my mask of deception and rout out my true motives from my lying lips. There was a Mr. Tompkins in the front hall bedroom two flights up. Perhaps it was he I was seeking. He worked of nights; he never came in till seven in the morning. Or if it was really Mr. Tucker (thinly disguised as Paley) that I was hunting I would have to call between five and –

But no; I held firmly to Paley. There was no such name among her lodgers. Click! the door closed swiftly in my face; and I heard through the panels the clanking of chains and bolts.

I went down the steps and stopped to consider. The number of this house was 43. I was sure Paley had said 43 – or perhaps it was 45 or 47 – I decided to try 47, the second house farther along. 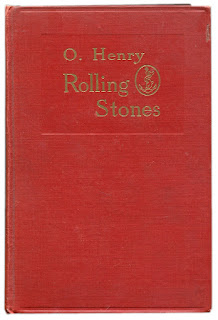 I rang the bell. The door opened; and there stood the same woman. I wasn’t confronted by just a resemblance – it was the SAME woman holding together the same old sacque at her throat and looking at me with the same yellow eyes as if she had never seen me before on earth. I saw on the knuckle of her second finger the same red-and-black spot made, probably, by a recent burn against a hot stove.

I stood speechless and gaping while one with moderate haste might have told fifty. I couldn’t have spoken Paley’s name even if I had remembered it. I did the only thing that a brave man who believes there are mysterious forces in nature that we do not yet fully comprehend could have done in the circumstances. I backed down the steps to the sidewalk and then hurried away frontward, fully understanding how incidents like that must bother the psychical research people and the census takers.

Of course I heard an explanation of it afterward, as we always do about inexplicable things.

The landlady was Mrs. Kannon; and she leased three adjoining houses, which she made into one by cutting arched doorways through the walls. She sat in the middle house and answered the three bells.

I wonder why I have maundered so slowly through the prologue. I have it! it was simply to say to you, in the form of introduction rife through the Middle West: “Shake hands with Mrs. Kannon.”

For, it was in her triple house that the Christmas story happened; and it was there where I picked up the incontrovertible facts from the gossip of many roomers and met Stickney – and saw the necktie.

Christmas came that year on Thursday, and snow came with it.

Stickney (Harry Clarence Fowler Stickney to whomsoever his full baptismal cognominal burdens may be of interest) reached his address at six-thirty Wednesday afternoon. “Address” is New Yorkese for “home.” Stickney roomed at 45 West ‘Teenth Street, third floor rear hall room. He was twenty years and four months old, and he worked in a cameras-of-all-kinds, photographic supplies and films-developed store. I don’t know what kind of work he did in the store; but you must have seen him. He is the young man who always comes behind the counter to wait on you and lets you talk for five minutes, telling him what you want. When you are done, he calls the proprietor at the top of his voice to wait on you, and walks away whistling between his teeth.

I don’t want to bother about describing to you his appearance; but, if you are a man reader, I will say that Stickney looked precisely like the young chap that you always find sitting in your chair smoking a cigarette after you have missed a shot while playing pool – not billiards but pool – when you want to sit down yourself.

There are some to whom Christmas gives no Christmassy essence. Of course, prosperous people and comfortable people who have homes or flats or rooms with meals, and even people who live in apartment houses with hotel service get something of the Christmas flavor. They give one another presents with the cost mark scratched off with a penknife; and they hang holly wreaths in the front windows and when they are asked whether they prefer light or dark meat from the turkey they say: “Both, please,” and giggle and have lots of fun. And the very poorest people have the best time of it. The Army gives ‘em a dinner, and the 10 A. M. issue of the Night Final edition of the newspaper with the largest circulation in the city leaves a basket at their door full of an apple, a Lake Ronkonkoma squab, a scrambled eggplant and a bunch of Kalamazoo bleached parsley. The poorer you are the more Christmas does for you.

But, I’ll tell you to what kind of a mortal Christmas seems to be only the day before the twenty-sixth day of December. It’s the chap in the big city earning sixteen dollars a week, with no friends and few acquaintances, who finds himself with only fifty cents in his pocket on Christmas eve. He can’t accept charity; he can’t borrow; he knows no one who would invite him to dinner. I have a fancy that when the shepherds left their flocks to follow the star of Bethlehem there was a bandy-legged young fellow among them who was just learning the sheep business. So they said to him, “Bobby, we’re going to investigate this star route and see what’s in it. If it should turn out to be the first Christmas day we don’t want to miss it. And, as you are not a wise man, and as you couldn’t possibly purchase a present to take along, suppose you stay behind and mind the sheep.”

So as we may say, Harry Stickney was a direct descendant of the shepherd who was left behind to take care of the flocks.

Getting back to facts, Stickney rang the doorbell of 45. He had a habit of forgetting his latchkey.

Instantly the door opened and there stood Mrs. Kannon, clutching her sacque together at the throat and gorgonizing him with her opaque, yellow eyes.

(To give you good measure, here is a story within a story. Once a roomer in 47 who had the Scotch habit – not kilts, but a habit of drinking Scotch – began to figure to himself what might happen if two persons should ring the doorbells of 43 and 47 at the same time. Visions of two halves of Mrs. Kannon appearing respectively and simultaneously at the two entrances, each clutching at a side of an open, flapping sacque that could never meet, overpowered him. Bellevue got him.)

“Evening,” said Stickney cheerlessly, as he distributed little piles of muddy slush along the hall matting. “Think we’ll have snow?”