From the Computer Vault Dept.: And then there are the seeming orphans that crouch in old computer directories, pieces that I wrote many years ago that bear no identification of their intended destinations, and don’t show up in the hard copies I managed to retain. Here’s one of them, for a long-gone software program I barely remember examining, in an era that seems more technologically remote than ever.

MOVEABLE TYPE, for all its benefits, froze the way individual letters look on the page. We who read and write English use one of the simpler languages, in terms of the characters involved, which made it all the easier for us to render the language on an instrument as inflexible as a typewriter.We take for granted a minimum of diacritical markings – and a complete absence of cedilla, hacek, and ess-tsett. 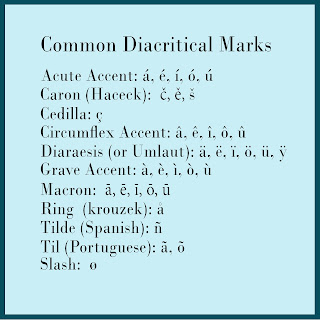 In the pre-computer era, typing in a different language was easy. Either you notated diacritics with creative overstrikes, or you found the appropriate typewriter. With graphical word processing now the norm, a program like Accent fills an important niche. Windows’ ability to display characters in any desired typeface means that those characters can represent any language. The most popular fonts, including those provided with Windows, contain the most-used foreign-language characters, but Accent adds its own set of TrueType typefaces for such character sets as Cyrillic, Greek, Arabic, and Hebrew. Japanese and Chinese languages aren’t yet supported, but are promised for a future release.

Most importantly, what lies beneath Accent is a full-featured word processor that gives button-bar access to formatting commands, multilingual spell-checking and thesaurus, and even individual word translation among five languages. An integrated utility called KeyMaps redefines your keyboard according to the language you’ve chosen to work in, with many of the languages offering more than one keyboard layout to ease your input.

All word processors embed codes to change from one typeface to another; Accent goes a step further by letting you change from one language to another within the same document. Choose one of 55 languages from the pull-down menu (choose by name or by country flag) and the keyboard is appropriately re-mapped. If you can’t remember which key is which, use the KeyMap overlay. It’s a floating keyboard that serves not only as a picture of the new assignments but also lets you enter characters (albeit slowly) by clicking the screen. You can also change keyboards using the KeyMap menu.

Each keyboard redefinition tries to reproduce both what you’d find on a particular country’s typewriters – and it’s impressive how far the QWERTY layout traveled – as well as the characters that didn’t make the cut but now can be produced with Alt- and Ctrl-key combinations. You can even change your English-language keyboard to the Dvorak layout.

Any full-character typeface installed in your system can be chosen to display the Western languages; specialized typefaces added by Accent are grouped on the pull-down typeface menu under the categories East European, Cyrillic, Greek, Turkish, Hebrew, and Arabic. (In its menus and manual, the software perpetuates the common mistake of calling a typeface a font. A font is actually a collection of typefaces in different weights – typically Roman, italic, bold, and bold-italic.)

Define part or all of a page in a particular language and Accent will try to preserve the typeface characteristics even when you ask it to export the file to a different word processor format; obviously, the most consistent result is obtained within Accent, which makes this a ripe candidate for object linking and embedding, not yet implemented with this program.

By itself, however, Accent has layout tools that compete even with full-blown desktop publishing applications. Columns and tables can be created and configured from the button bar, which allows justification and text-wrap selections along with the standard set of editing and typeface controls. Style sheets and templates ease the process of duplicating successful layouts, and a full complement of import and export formats lets you move texts among other applications. Thanks to merge field support, master and data files can be merged to a printer. The program also lets you import and place graphic images, both bitmaps and line drawings.

Accent is also versatile in its home language support. Even after you’ve chosen a default language for menus and dialog boxes you can switch among 19 other languages. The spell-checking works in 16 different languages, the thesaurus in 11, and online help is available in eight. There’s a price in disk space to pay if you choose to install every option – the 21 installation disks can take up to 46MB of space – but the installation routine lets you be selective.

New to version 2.0 is bidirectional text entry, needed for the also newly-added Arabic and Hebrew languages. That’s why the Accent text-entry cursor has an added arrow to remind you which way the keyboard’s going, useful if you’re switching language mid-page. Because Arabic characters can change shape based on position within a word, Accent examines the text as it’s typed to make decisions about such contextual requirements.

The full-featured version, examined for this review, is Accent Professional. If your requirements aren’t as profound, the $199 sibling program, Accent Special Edition, provides the same keyboard and menu support, but fewer typefaces and fewer languages for help spell-checking, hyphenation, and thesaurus. Accent Express, at $69, is further stripped of those extras, but maintains the core of typing languages and keyboard maps.

Whether you’re typing a menu or translating a tech manual, Accent gives easy access to elusive foreign-language characters. That alone makes the program worthwhile; the fact that it lets you create fancy pages makes the program more valuable still.