AT SOME POINT during my single-digit Christmas years, I learned to impress my parents and other elders by declaring that what I really, really wanted as a holiday gift was World Peace. What I really wanted, of course, was to parlay such pearly altruism into a personal reward. Which puts me in alignment with those double- and practically triple-digit political leaders who pay lip service to notions of peace while scheming to profit off the next armed conflict. 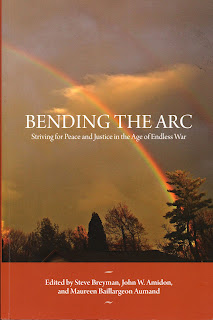 Bending the Arc is an important book that collects 17 essays about pathways to a peaceable world, placed in the context of an annual conference that has been going in New York’s Mohawk Valley since 1998. It began as the Kateri Peace Interfaith Pilgrimages, started by U.S. Marine veteran (and president of the Albany chapter of Veterans for Peace) John Amidon as an extension of his protests against the School of the Americas – an institution he more accurately terms the “School of Assassins” because of its training of Latin American military savages who used that training to slaughter hundreds of thousands of Latin American citizens.

The first two years were pilgrimages; in 2000, Amidon turned it into a peace conference. He describes the first few years of the event in the book’s opening chapter, putting them in the context of disturbing world events, ever hoping for tangible signs of the conference’s effect. The second half of the history is continued by Maureen Baillargeon Aumand, who has co-coordinated the conference since 2004 and helped bring more activists and would-be activists to it. The theme of the event has changed from year to year: 2009's was “Harnessing the Winds of Change,” 2013 brought “The Moral Imperative of Activism,” and the 2016 call for action was titled “Confronting the Politics of Fear.” Ambitious topics, ambitious events, but Aumand ends her essay by asking, “Have we found the way forward to shared planetary sustainability where war is seen as abomination and justice and equality rule?”

Of course not. Instead, the minute hand inches forward on the Doomsday Clock, environmental degradation proceeds at breakneck speed, America is wracked by partisanship and fragmentation, a new Cold War broke out, the U.S. defense budget increases obscenely, eating away at the nation’s capacity for social uplift, and global inequality grows rather than shrinks.

The chapters that follow, each penned by a significant thinker, follow that lead in refusing to pretend that any journey toward peace can be easy, but that it remains a vital commitment that each of us should make.

How practical is this pursuit? James E. Jennings terms it “quixotic” to acknowledge what seems to be an utterly impractical aspiration, but he brings an on-the-ground experience that led him from the coal-mining camps of West Virginia to work in U.S.-invaded Iraq as part of a Conscience International team. He provides an effective analysis of the challenges any individual faces when hoping to pursue humanitarian work in the face of populist ignorance.

Also working on the ground has been Medea Benjamin, whose account of the founding of CODEPINK is a valuable reminder of some of the more horrific foreign policy moves by every recent U.S. administration, and she brings an on-the-ground perspective to the challenges both of trying to change those policies and of helping the people who have been so severely victimized by them.

Nick Mottern’s journey also began in the military, where he began to understand the insidious results of colonialism – even likening himself to the title character of Graham Greene’s novel The Quiet American, a book that pissed off the U.S. government enough to ban Greene from entering this country again. Mottern notes that the public isn’t as involved in protests because they have less at stake: fewer family members, and less exposure to real news about war’s consequences. The latter is a product of a media system that learned its lesson after the Vietnam War, when actualities of slaughter galvanized Americans, and now packages news as cunningly as any other ratings-driven entertainment program. As to the former, the horror of drone assassination has allowed for the growing general dispassion.

Stephen Downs is old enough to have learned about the horrors of Hitler when he was six and his mother advised him, “There were many good people in Germany who could have stopped him but they remained silent and let him seize power.” Downs looks at the nature of tribalism, while the late Blase Bonpane describes a long history of tangling with the military-industrial complex. As he explains in his essay “Liberation Theology,” he served both as priest and professor in a career of waging peace, and worked alongside such legends as Daniel Berrigan and Cesar Chavez.

“It wasn’t in my nature to love one group and hate another,” writes Kristin Y. Christman. Confronted, when she was in third grade, with a split by her classmates into two fractious groups, she chose neither. “The wisdom of animals made more sense to me.” She has developed a four-part model for “encouraging peacefulness by changing circumstances to fulfill needs.” This Paradigm for Peace, as she named it, addresses Roots of Violence and Escalators of Violence, presents Three Facets of Solutions, and encourages “an underlying cooperative, open-minded ‘Quest’ attitude of thought and discussion,” which her essay goes on to intelligently, accessibly elucidate.

Is there even time to save the world? Jim Merkel’s “The Quiet Revolution” notes that the Global Footprint Network determined August 13, 2015, as Earth Overshoot Day, when we reached the point at which our consumption of the planet’s resources outweighed whatever can be renewed. He’s looking at “defusing the population bomb,” another important step in making sure people aren’t starved of resources – one of many contributing factors to global violence.

What’s the view from deep inside? Ann Wright spent most of her life working for the U.S. government, with a hope that she would be “contributing to a more peaceful and just country and world.” She ended her 29-year stint, which included diplomatic work in many troubled parts of the world, in March 2003, in opposition to George W. Bush’s invasion of Iraq. As she wrote in her resignation letter,

I strongly believe that the probable response of many Arabs of the region and Moslems of the world if the U.S. enters Iraq without UNSC agreement will result in actions extraordinarily dangerous to America and Americans. Military action now without UNSC agreement is much more dangerous for America and the worlds than allowing the UN weapons inspections to proceed and subsequently tasking UNSC authorized action if warranted.

Her fascinating story parallels many others in this book, as she came to understand the hypocrisy of militarily based attempts to control the world for the enrichment of an already-wealthy few.

Lawrence Davidson rebelled against an authoritarian father by joining Students for a Democratic Society in the early 1960s, in time to protest the Vietnam War and work for civil rights. This also inspired Davidson to explore the “mass psychology of citizens that brings them to support governments that defy commonsense notions of fair play and fulfillment of human needs.” His essay takes a dark look at that phenomenon, but offers hope in the vision of peace he maintains, and which, in a kaleidoscopic way, is what draws all of these essays together. And these are only the highlights of a rich collection. It’s a vision we can share; it’s a vision that ought to be contagious. We’re terrific, as a society, at spreading disease; Bending the Arc shows a more joyful way in which we can infect our friends and neighbors.

Bending the Arc: Striving for Peace and Justice in the Age of Endless War
Edited by Steve Breyman, John Amidon, and Maureen Baillargeon Aumand
SUNY Press, Albany, NY
Posted by B. A. Nilsson at 10:11 PM