The Web of Jazz

From the Vault Dept.: I had reviews in the first few issues of Internet Life magazine. As soon as I stopped contributing, the magazine developed a much sassier attitude. Which may be why there was room for me no longer – sassy I ain’t. Here’s a 1996 rundown on jazz-related sites, almost none of which has any relevance now.

DEFINITIONS OF JAZZ are hotly debated, and you can add your voice to the many debates raging on the appropriate Usenet forums. It’s generally recognized as one of the most indigenously American art forms, rooted in the blues that grew out of the Mississippi Delta. Jazz evolved wildly into many distinctive strains, reaching into every other music styling, and even within the realm the record stores label “jazz” it’s hard to pin down. Web sites, not surprisingly, run a similar gamut. Record companies use them to promote merchandise, and some of them do it very skilfully. But this is an area where the devoted fan can do even better, mixing music and images with biography and opinion. 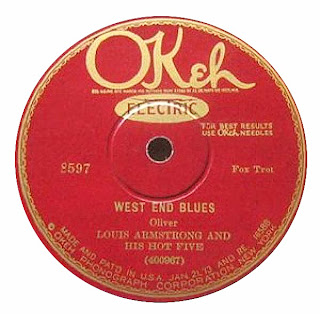 Plan to spend an hour or more browsing Jazz Online. A hard-to-read home page opens into a virtual cornucopia of record industry-related information that isn’t devoted to one label in particular. Jazz here is celebrated as a living entity, with a special emphasis on young, contemporary performers. JazzTimes magazines keeps its online version here, and there’s a fantastic array of labels, including Verve Interactive, Blue Note, the JVC Music Jazz Cafe, ECM, and RCA. Each label displays info about an album or two, a cover shot, and, if you’re lucky, a sound file. Even a few video clips show up in the more adventurous pages. Warner Bros. Records has its JazzSpace at this site, which featured a live Internet broadcast by tenor saxman Joshua Redman back in October. Menu sequences are sometimes as difficult to follow as an Anthony Braxton tune, and the information needs to be updated much more regularly, but this is a very ambitious site doing an otherwise good job of living up to its promise. [UPDATE: The original site is gone, morphed into something unrelated. Here’s where you’ll find JazzTimes.]

JazzNet looks sleek and unfolds well. It’s an umbrella for, among other things, the interactive version of Jazz Now magazine (a fascinating interview with San Francisco pianist/singer Scotty Wright ran a couple of months ago), a section titled  Remembering Miles, news from the Concord and Monterey Jazz Festivals, the catalog of DaCapo Press Jazz and Blues, and the classic reissues from V.S.O.P. Records, complete with audio excerpts and online ordering. The Tucson Jazz Society Newsletter covers events in that part of the country, and News from Fantasy Records keeps you up to date with one of the better jazz labels. A good set of jazz-related links is also maintained here. [UPDATE: Also gone. What’s left of Jazz Now is here.]

Boppers called them “moldy figs” – the fans and players of traditional jazz. The Wolverine Antique Music Society is an Oregon-based society whose members collect and preserve 78 rpm recordings, and its Web site brings honors the group with a vast amount of essays. Some of those writings verge dangerously on the academic, but they’re all well written and informative. And where else on the Web will you find topics as diverse as “Paul Whiteman’s Recording Remembrances,” “The Austin High Gang & 1920s Chicago Jazz,” and “Nazi Germany’s Official Position on Jazz”? Pages tend to scrawl with text, and there aren’t many inline, but look for GIF files of old labels and album covers. Great selection of sound bytes here, too.

When Satchmo blew his first solos with King Oliver’s Creole Jazz Band, jazz changed forever. The Louis Armstrong Home Page pays reverent homage to the great trumpet player, even if those seminal early years are neglected in favor of Louis’ later “Mack the Knife” period. Enthusiast William Terpening put together a set of  image-rich pages, with expansive descriptions of his favorite recordings, illuminated by audio files. Look for  He has written a lengthy biography that verges on the hagiographic, but Terpening makes no bones about his prejudice--nor should he. Also look here for links to other good jazz sites. [UPDATE: Gone. Try the Louis Armstrong House Museum site instead.]

Radio stations support and often provoke significant jazz stylings. The WNUR-FM JazzWeb is the electronic offshoot of Northwestern University’s radio station, a site that’s in its formative stages but promises to be a helpful resource if it continues to grow as planned. A broad listing of artists gives bios and discographies for classic performers like Duke Ellington and Charlie Parker to such contemporary figures as Pat Metheny and Keith Jarrett, with pointers artist-related home pages on other web sites. Other jazz-friendly radio stations in the U.S. are listed, and you’ll find links to online magazines, retailers, and other resources. More images would make the pages more graphically appealing, and no jazz site can be complete without musical examples. [UPDATE: It’s here, and it’s changed considerably.]

Stop in at the Winnipeg-based Hard Bop Cafe for listings of local events as well as festivals and clubs throughout Canada. Layout is drab, with few images and no audio, but it’s the home of a good Don Ellis section, and there’s an emphasis here Italian jazz performers and their recordings. Check out the very informative Miles Davis for Beginners section. [UPDATE: No trace of this site that I can find.]

ECM Records boasts 26 years’ worth of recordings, most with a slightly alternative edge, and they’re  listed at this site along with many musical examples, usually available in high- or low-quality formats, depending upon how much download time you want to put in. If you find an artist you like, similar artists will be recommended--that’s because you can buy CDs online here. Look for a special Keith Jarrett section.

EMI Jazz, based in Holland, has a smart-looking Blue Note Corner that lists artist information, displays record album covers, and offers downloadable audio clips. Not a lot here, but it’s a pleasing design. Recordings range from reissued Chet Baker to newly-waxed Javon Jackson--and some of the information is in Dutch. [UPDATE: Blue Note has its own site now.]

InterJazz, the Internet Jazz Plaza, wants to bring players and listeners together through club listings, a Yellow Pages service, and want ads. So far all the listings are pretty sparse. It’s tough to charge for something that has no track record. But the ambitious IRC events, slated to include noted performers, are a good idea. More info needed here – as well as an active user base. [UPDATE: Changed to a hosting site.]