WE IN THE UNITED STATES may be among those who lay out the most excessive Christmas dinners. The British were recently cited as the worst in Europe by health app-maker Lifesum, because they typically consume a meal that is 30 percent sugar, with 69 grams of fat and 211 carb grams.

Putting that in menu terms, it’s some manner of roasted fowl with stuffing, roasted potatoes, mince pie, Christmas pudding and, even in the Cratchit household, more. 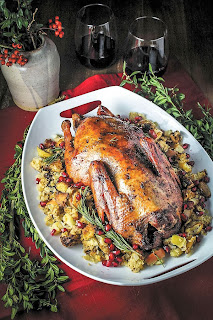 The healthiest? France. This despite the prominent role foie gras plays in the meal, which rarely includes processed food and comes in with 69 grams of fat and 211 grams of carbohydrates. In addition to goose liver, the French enjoy oysters, lobster, roasted fowl with chestnuts and stuffing, at least three types of cheese and a traditional holiday cake known as a bûche de Noël and shaped like a Yule log. And, of course, Champagne.

Lifesum is based in Sweden, which was 10th on the best-to-worst ranking of 19 European countries. That country’s typical Christmas Eve dinner is a buffet that includes meats and fish and a number of sweets, including risgryngrot, a rice pudding that contains a single almond to grant its discoverer a wish or a wedding.

Says Lifesum’s Lovisa Nilsson (no relation, as far as I know), “Christmas is a time for eating well and enjoying food, but clearly some European countries have, by accident of tradition, dishes that offer far less reason for diners to feel guilty,” which is a nice thought until that pudding is served.

The American holiday meal is descended from the British model, so we’re probably doing ourselves no favors. So if you want to do something different and aren’t ready to try the French model, the second-healthiest tradition is in the Czech Republic, where fish soup, cold potato salad and sour cabbage are the favorites.

Yet Germany, which lies between those two nations, is the third (behind Ireland) unhealthiest. The roasted entrées—goose (Weihnachtsganz) or carp (Weihnachtskarpfen) or suckling pig—are in line with what’s served elsewhere in Europe, but it’s the processed and cured meats that push them over the nutritional edge. And don’t forget the potato salad.

A little farther south, in Italy (particularly in southern Italy), there’s the tradition of the vigilia, a vigil that includes fasting. Technically, fasting means only an intake reduction, and the tradition in Catholic households of abstaining from meat does not always preclude enjoying fish. Thus the Christmas Eve meal of baccala (dried salt cod), calamari, smelts, whitefish, shrimp and more.

The Christmas Day meal in northern Italy is poultry-centric, while the south seems to prefer lamb or fish. The north sweetens itself with some manner of panettone, a fluffy bread with raisins and candied fruits, while the south enjoys an array of zeppole, cannoli, biscuits and fruit.

Third-best-ranked Poland serves a meal that begins with a traditional Christmas good-luck wafer and goes on to a meatless array in which carp is preferred, along with herring in wine or cream sauce, pierogi, potatoes and sauerkraut.

Mexico borrowed the tradition of salt cod from Europe, and you might find it in a stew with tomatoes and potatoes, olives and capers (bacalao a la vizcaína). Again, the big dinner is the night before, with tamales, the rosemary-resembling romeritos, a garlicky hominy soup called pozole served with lettuce, avocado and lime, and a roasted turkey sauced, if you’re lucky, with the compote of peppers and seeds and bitter chocolate called mole. Look for fried, sweet buñuelos for dessert.

Tamales are a staple of Peru’s holiday table, served with aji, a hot sauce, while Venezuela’s tamales are hallacas, a labor-intensive treat on everyone’s Christmas menu because it’s rarely made any other time of the year. The boiled cornmeal container may be filled with meat accompanied by olives or raisins, peppers, pickled vegetables and much else. Dessert is dulce de lechoza, made from papaya and brown sugar, enjoyed with egg nog (ponche crema).

Couve à mineira is a traditional Brazilian preparation of collard greens that’s part of a massive Christmas Eve meal, along with roasted turkey or pork, platters of ham, rice, salads and desserts of lemon tart and panettone.

The southern hemisphere’s Christmas occurs in summer, so you might enjoy an outdoor barbecue in Argentina; around the world in Australia, it’s also a hot-weather event at which the meats may be served cold unless they’re coming off the barbecue. Pavlova, a fruit-and-meringue compote, is the national dessert.

While I’m not averse to barbecuing in the snow, it can be dangerous if I’ve been consuming the traditional Norwegian gløgg that my father presents us every year. Red wine and brandy and cinnamon and fruit peel and I’m not sure what else is in there, but you drink it warm and it sneaks up on you. Which is necessary to prepare you for lutefisk, a pungent preparation of whitefish and lye that my relatives down uncomplainingly, along with pinnekjøtt (steamed salted lamb), julepølser (Christmas sausage) and medisterkaker (fried pork patties).

Elsewhere in Scandinavia, the Danes dine on duck or goose with red cabbage and potatoes, with a dessert pudding that, as in Sweden, contains a single almond that gives its finder a prize. Christmas Eve dinner in Finland traditionally features ham with a rutabaga casserole and salad of beets.

Greenland doesn’t make the Lifesum list, but we’re talking about a country where it’s too cold to grow Christmas trees. Following a Christmas Eve church service, you settle near your imported tree for a dinner of mattak (or muktuk), made from the blubber and skin of a whale, chewed raw—although it can be breaded and fried. It’s said to be a great source of vitamins C and D, but I suspect it’s going to be the skin and blubber (and meat) of a turkey that you’ll find on my table this year, and I predict that Lovisa won’t be among the Nilssons who gather there.