Secrets of the Night Sky

Heavenly Bodies Dept.: We stood in a bookstore parking lot the night after my interview with him appeared in print, where Bob Berman took his book-signing audience in order to share a spectroscopic look at some of the stars in view. He proved as fascinating a speaker as he is a writer, and you can discover what he’s currently up to at his website.

MANY OF THE SECRETS Bob Berman wants to share have been general knowledge for centuries. But his book Secrets of the Night Sky (William Morrow & Co.) is intended partly to undo the damage that’s been caused by our recent and profound inattention to what’s going on in the heavens, and partly to bring us up to date on the results of recent study. 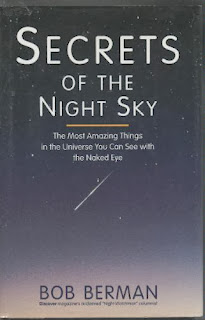 Berman’s book stresses what’s observable with the naked eye, recommending only sporadically that binoculars might be helpful. But he keeps taps on the heavens at the Overlook Observatory in Woodstock, where “everything is motorized. I have a 12 ½-inch reflector telescope and an 8-inch Schmidt-Cassegrain.” He is also director of the Cobb-Matheissen Observatory at Storm King Academy in Cornwall-on-Hudson.

You may be familiar with Berman’s radio commentary, Skywindow, which airs over WAMC and its associated stations every Sunday at 1:35 PM. “It’s a little like Stardate,” he says, “but slanted to our own area, telling you what to look for in Albany and the Hudson Valley.”

His love of his work comes through both in the book’s lively stories and in his personal enthusiasm. “I’ve always loved astronomy – I think a fascination for it is built into all of us, because it’s part of our home and it’s natural to have an interest in your neighborhood. My earliest memory is looking at the night sky from my stroller, and I loved the look of the stars. As a kid I read every book I could find on astronomy. What’s amazing is that I was able to turn this into a vocation. Especially considering that I wasn’t great in math. But I had a talent in English class, which helps when I’m writing and speaking about the subject.”

Some of the material in the book was developed from ideas in Berman’s monthly column – The Night Watchman – for Discover magazine. “But out of an eight- to ten-page chapter, we’re talking about only a paragraph or two that I lifted directly.” In other words, even if you have a stack of old Discovers, you won’t find the same information that the book offers.

“I’ve tried to avoid things like, ‘Look straight up and here’s the star Arcturus.’ That stuff’s boring. I’m looking for what’s snappy or unusual or even bizarre. Like with Arcturus: in my book I mention that there’s someone in Woodstock who claims to be inhabited by someone from Arcturus.”

The subject of space brings out the space cadets, as Berman already has discovered on book tours. “I was at a signing in a big book store in Florida, and someone came up to me and said, ‘Oh, astronomy. A lot of people here believe in that.’ And another guy asked, ‘Do you talk about UFOs in that book? They’re here, you know. They live underground. It says so in the Bible.’”

Lunatics notwithstanding, Berman notes that there’s a fairly consistent public interest in astronomy, “with little spikes of even more interest when something happens like that comet hitting Jupiter. And magazines like Discover and Sky & Telescope have increased their readership three-fold.” As a hobby, stargazing is one of the few where only a single piece of equipment is needed. “Stamp collectors need stamps as well as a magnifying glass, but for the astronomy buff only a telescope or a good pair of binoculars is needed. And that $99 scope at K-Mart may be enough. We have a disease of high power-itis, but higher power isn’t necessarily better when it comes to getting a clear image. Countless young astronomers have started with a small, inexpensive scope.”