From the Vault Dept.: Sometimes you have to sing a love song. Sometimes you want someone to sing it for you – Sinatra, perhaps, or Rosemary Clooney, or, if you dwell as I do in the more distant past, Bing. But sometimes you want soloists and chorus and orchestra and you really want to impress your inamorata. How about Schoenberg’s Gurrelieder? Here’s my review of a performance of this all-too-rarely-performend piece in 1999. It’s a slightly longer version than what appeared in print.

WHAT MAKES ARNOLD SCHOENBERG’S two-hour cantata Gurrelieder so fantastic and frustrating is the range of musical expression contained within the piece. The composer worked on it for over a decade, during the earliest years of this century, completing the work in 1901 but revising and orchestrating it up until its premiere in 1913. 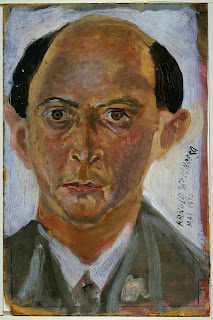 At first he’s very influenced by Richard Strauss, and Strauss was impressed enough with Schoenberg’s first sketches to recommend the younger composer for a stipend.

As the piece grew, telling the story of the doomed love of King Waldemar for the death- and nature-obsessed Tove, Schoenberg fell more and more under Wagner’s spell. The piece begins with two soloists and orchestra; by the end of the work, more soloists, a narrator, and a full chorus are added. You can hear the influence of Schubert at the beginning; by the end, we’re wrapped in a Wagnerian voice through which Schoenberg’s later musical identity is splendidly apparent.

With its demand for a large orchestra, chorus and soloists, not to mention its considerable length, it’s not easy for an orchestra to program. Add to that the kiss-of-death-at-the-box-office nature of Schoenberg’s name and we’re lucky to have had this performance last weekend at Bard College, down the river at Annandale-on-Hudson. It was part of a festival titled “Schoenberg and His World” that runs through this weekend.

Bard College president Leon Botstein also is music director of the American Symphony Orchestra, which forms the core of the Bard Festival Orchestra that Botstein conducted. It’s a dynamite group, well equipped to handle Gurrelieder’s rigors, but what a tough piece to with which to achieve the finesse it deserves. In the prelude to the “Wild Hunt,” near the finish of the piece, I was listening for a smoother shimmer of the wind section transitions. Part of the problem were the acoustics (or lack thereof) in the large, warm tent under which the concert was performed; another was simply the lack of attention to such detail.

Tenor Thomas Studebaker sang Waldemar with an appropriately heoric timbre but s somewhat dry presentation. He also was hampered by a too-small voice for the piece, and thus couldn’t soar above the thicker orchestral accompaniments. Soprano Susan B. Anthony, as Tove, had no such problem, and she even brought a delightful degree of acting to her role, painting her voice with a compelling mix of coyness and romantic tragedy. In the very Schoenbergian section about a wood dove’s observation of the fated lovers, mezzo-soprano Petra Lang was frighteningly magnificent. Baritone Leon Williams almost stole the show in the brief role of the Peasant, and tenor Steven Tharp, as Klaus the Jester, was appropriately mischievous.

Werner Klemperer added some name value in the role of the narrator at the end of the piece, which requires several paragraphs of German sprechstimme. He had too much working against him, however. He alone was miked, which was jarring, and his speech wasn’t clear – perhaps his German (native language, I suspect) is too comfortable, like, you know?

Ah, but it was a magnificent piece, performed on a magnificent evening with the hint of a thunderstorm, and I’m sure it made Schoenberg believers out of many who might otherwise might steer shy of the composer based on reputation alone.