Getting Gouged Dept.: My singular contribution to Wine Spectator magazine was supposed to be a short piece about a consortium of corkscrew collectors with whom I traveled for a couple of days in 1991. The piece I submitted, which appears below, was rejected; what eventually ran was a glorified caption I wrote to go with a photo of Al Capone’s corkscrew. The reporter referenced in the final graf was, of course, me; I was given the corkscrew in question as a souvenir but have yet to gull anyone into performing with it as foolishly as I did.

THEY BRING A NEW TWIST to bottle opening, using some very old devices. The International Correspondence of Corkscrew Addicts held its annual get-together Sept. 27-Oct. 3 in the Hudson Valley, touring historic sites in Westchester, Putnam, and Dutchess Counties with vintage openers near at hand. Each day the members dined at different restaurants; each meal featured local wines that were opened with corkscrews usually far more costly than the wine. 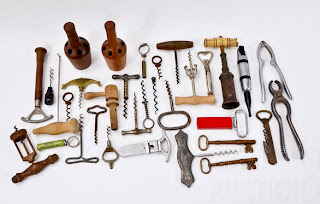 Founded in 1974 by Dr. Bernard Watney, chief medical officer of London's Guinness Brewery, the 50-member organization convenes near the home of a different host each year. “It appealed to me to have an addiction for something innocuous like this,” said Watney. “In my business, I'm often dealing with a lot of alcoholics.”

Sixty members and their companions (or “go-withs,” as they've termed the friends and spouses, borrowing a bottle-maker's description of accessories) came from all over North America and Europe for this year's party, held near the Stamford, Connecticut, home of Don and Bonnie Bull.

“I started collected anything with beer advertising on it,” said Don, who devotes a room in his house to his collection. “Needless to say, I ended up with a lot of corkscrews.”

ICCA members are quick to remind us that there was a time when bottled anything required a corkscrew. “Sometimes it came with the product,” explained Joe Paradi, an Ontario-based member, “the way you still find keys with sardine tins.”

Elsa Bradshaw wears a tiny perfume opener as a pendant and was indirectly responsible for starting her husband's collection. “My wife was sorting out the house and property of an elderly aunt,” said David, a surgeon who lives in York, England, “and she took our ten-year-old son along. He was rummaging in the kitchen and found a corkscrew in a drawer, a roundlet. Now, young son had little use for a corkscrew, so I talked him out of it. That was number one. Then Elsa found another in an antique shop. When you have two, you have a collection.”

A members-only auction highlights every get-together. This year's event was held at the Stouffer's Westchester Hotel in White Plains, NY, featuring old and unusual corkscrews from sixteen collections with reserve prices ranging from one dollar to $3,300. Highest bid was $650 for a turn-of-the century Swedish combination snuffbox and corkscrew.

Although collecting is a serious passion with the ICCA, members don't take themselves too seriously. Bradshaw spoke during a dinner at the historic Pound Ridge Inn, drawing amusing (and painful) parallels between corkscrews and the surgical implements he handles in the course of his work. Invited to demonstrate wine-bottle-opening ability, a visiting reporter failed embarrassingly to engage a standard-looking waiter's corkscrew from Bull's collection. It turned out to be reverse-threaded  – for lefties.