Yule Be Sorry Dept.: The Christmas music has started and already feels like it never will stop, always has been grinding in the background. Back in my more frequent reviewing years, I had my work cut out for me of a December, and this was one such annual event, from 1990.

NOBODY CAN BE FAULTED for jumping on the handbell bandwagon, least of all during the holiday season. The Hand-Bell Choir that made its debut last weekend with the Mohawk Valley Chorus was organized in September, and it's a good bet that the success of this association will lead to future performances together. 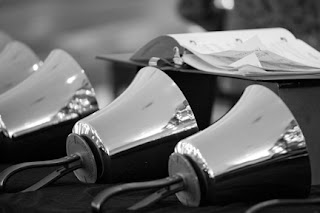 Following a tradition of bringing each concert to locations in three neighboring counties, the Chorus stopped at Union College’s Memorial Chapel Saturday evening with a program titled “It’s Christmas.”

Selections ran an impressive gamut from traditional to 20th Century, from the loud and stirring to quiet and unaccompanied. Former musical director Carl Steubing returned to lead the group, with longtime accompanist Suzanne Lake working at the piano or organ.

While some might worry about a shortage of traditional material, I was pleased by the mix of programming and the programming strategy: by the end of the concert, after everyone’s already been singing along silently, the audience is invited to join in a set of well-known stuff (“You probably won’t even need the lyric sheet,” Steubing observed.)

The Chorus flexed its vocal chords with opening sequence of five songs carrying a classical flavor, with especially nice renditions of numbers by Elgar and Holst. Lisa DeNuzzo and Betsy Dorn were violin soloists in Elgar’s “The Snow,” playing a flowing, Edwardian melody accented by piano arpeggios behind a graceful chorus. Holst’s “Christmas Day” brought in the Hand-Bell Choir behind a medley that wove “Good Christian Men Rejoice” and “The First Noël” with a happy “God Rest Ye Merry, Gentlemen.”

A solo sequence of handbell songs showed both the precision of playing that’s required for these arrangements and the marvelous variety of sound the instruments can issue. Some notes went astray in “The Little Drummer Boy,” but Cynthia Dobrinski’s “Christmas Joy” (a medley of “Joy to the World” and “Go Tell It on the Mountain”), “We Three Kings” and the French carol “He Is Born” were skillfully played.

An a cappella set of spirituals was given a too-formal treatment, making them sound more like hymns than laments, but three European carols that followed found the chorus right at home. “Christ Was Born,” from Germany, also featured nice solos by Carol Hesselink and Ralph Cook, and Terrie Jackson, who was featured throughout the concert, sang a beautiful solo in the Polish carol “Lullay, My Jesu.”

A more popular feel informed the second half; the handbellists gave us “Rudolph the Red-Nosed Reindeer” complete with sleighbell effects along with “White Christmas” and a medley of familiar carols and songs.

As it came time for the audience to join in, the way was prepared with a triumphant “Ding Dong Merrily on High” with (what else?) handbells, part of a set that included Jackson singing Mel Torme’s well-known “The Christmas Song” complete with a gorgeous piano accompaniment by Lake.

The next set of Mohawk Valley Chorus concerts features popular songs and will be performed in Amsterdam and Schenectady March 23 and 24.