Which Way the Wind?

From the Celluloid Shelf Dept.: With Robert Redford’s movie The Company You Keep exploring the topic, I thought it was time to revisit a documentary about the Weather Undergound that was released ten years ago. Although I’d given up film reviewing a while back, Metroland asked me to write about it because, unlike so many others around the office, I was alive when the incidents described therein took place. Hope that qualification endures! This is a slightly longer version of the piece that ran in the magazine. 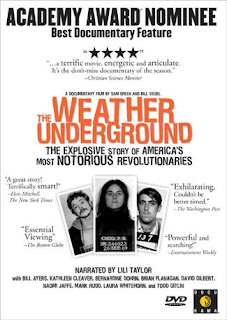 THE VIETNAM WAR FOOTAGE is grainy and scarred by time, archetype of a look now imposed on videos to portray gritty reality. Combined with well-placed sound-effects and a brilliant musical score, the footage is distant, dreamlike, nauseous. Because a movie, with its shifting points of view and telescoped time, is a vehicle of dreams, we’re viscerally affected. We want to avenge the Vietnamese boy whose head is blown open and whose blood geysers onto the ground for long moments after the executioner-soldiers stroll away.

Other horrific actualities of bombings and bodies and point-blank murders follow, interspersed with kinescopes of TV news tallies of the soaring numbers of American dead. So we applaud (with a measure of guilt) the proposed mission of the most radical element of a radical student group, the kids who take over a fractious Students for a Democratic Society convention in 1969 and announce their intention to fight violence with violence.

The Weather Underground is a brilliant documentary that shrewdly uses documentary techniques to present an emotionally charged view of events that, 30 years later, parallel contemporary events. And that wasn’t even the intention when directors Green and Siegel began work on this film five years ago.

The heart of the movie is a series of interviews with surviving Weathermen, whose commentary is placed alongside footage of their younger selves and an account of the founding and early journey of the group (the name came from Bob Dylan’s “Subterranean Homesick Blues”: “You don't need a weatherman to know which way the wind blows”).

Bernardine Dohrn (law school classmate of John Ashcroft and once one of the FBI’s ten most wanted) and Bill Ayers live in the Chicago area, although they’re seen touring the San Francisco docks where they once lived; the affable David Gilbert is interviewed at Attica, where he’s serving a life sentence for his participation in the 1980 Brink’s truck robbery. Gilbert’s wife, Kathy Boudin, isn’t mentioned in the movie because it was feared that her chance for parole (granted three months ago) might be imperiled.

Columbia University radical Mark Rudd makes the most eloquent case both for what he did at the time and his pacifist views of today. “Our strategy was that we would make the war visible to the United States,” he says, and he believed in a theory of guerrilla warfare called foquismo, “which is that an armed group begins the struggle and then the masses join.”

The masses didn’t join when Rudd and the others called for “Days of Rage” in Chicago in 1969. Where thousands were expected to arrive, little more than a hundred joined in a window-smashing rampage that firmly put the Weathermen on the map.

The bombing campaign that followed is acknowledged by Brian Flanagan, “but I won’t tell you who did what.” Like the others, he doesn’t recant the philosophy but he regrets some of the results.

This is most eloquently expressed near the end of the film by Naomi Jaffe, who now lives in Albany and works as an activist. Asked if she’d do it all again, she says yes – but she’d do it differently. (Jaffe hosted a Q&A at the Spectrum last Sunday, an event that proved how high emotions still run about these events.)

A mark of this movie’s success is that it’s impossible to separate the movie from the political issues it presents. Like the Weathermen, those political issues seem to have gone underground for many years, exemplified by the montage footage set to the soundtrack of the onetime Hanoi Jane’s workout video – but they’re re-emerging more sharply defined. Richard Nixon – whose image still incites revulsion in many my age – is seen thundering that he’ll never be influenced by anti-war protesters, foreshadowing the words of George W. Bush as he tried to ignore the protests inspired by his assault on Iraq.

The need for revolution hasn’t diminished. This documentary is vital viewing as we try to decide how to most effectively frame our actions in the future.

The Weather Underground
directed by Sam Green and Bill Siegel