From the Vault Dept.: Away back in the 1980s, before the boom times hit and we all grew wealthy, there was a phenomenon called “debt” that often left people owing more money than they could pay. Usually, I was among them. So it was a treat to get an assignment to write about collection agencies. Having so often been on the receiving end of those phone calls, I got to see what an actual collection office looked like. It looked like an office. This was one of a handful of pieces I wrote for what was then called the Capital District Business Review.

CLARK BRIGGS HAS ADVICE which, if followed faithfully, will put him out of business: “Pay your bills when they’re due. If you can’t pay on a given day, call them up and tell them why you’re going to be late.” 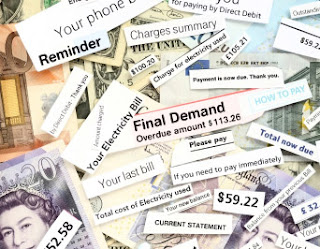 But he’s not worried about losing any work. He runs North-East Adjusters, a collection agency in Scotia, and finds that “for every one who pays attention, ten fall off the wagon. Almost every young person gets in over his head by the time he’s 25. Most of them struggle through; some go bankrupt. It’s part of the learning process.”

He doesn’t fit the image of the collection agent as a grasping, Scrooge-like ogre, but then none of the agents do. They couldn’t if they wanted to, because Federal legislation changed the face of the business a decade ago, imposing strictly-regulated guidelines to protect consumers from undue harassment or abuse.

“It was designed to protect them from us,” says Shirley Waple, CEO of Professional Adjustment Bureau in Troy. “But it still doesn’t protect us from them.”

The Fair Debt Collection Practice Act was passed on March 20, 1978. “It changed the business,” says Briggs. “I found it to be a practical set of rules that we can work with. But there are many laws on the books today that make it easy for those who don’t want to pay their debts. It’s easier to skip town and escape prosecution. Honest people pay their bills.”

Agencies turn full-time attention to a problem faced in the accounting offices of every business that operates on a credit system. Turning a case over to an agency for collection is an admission of at least partial defeat, because the agency takes a substantial percentage of the collected amount – usually 25 to 40 percent, sometimes as much as half.

Waple describes collecting as “a sophisticated business, not a boiler-room operation. Collectors are learned, intellectual people. They have to be. They have to comply with the law, and above all they have to be able to use a sound psychological approach in order to motivate debtors to pay. It’s not like it may have been in the ’20s and ’30s when collectors went out and twisted arms.”

It’s not always the individual consumer who’s being sought. Commercial collection is an expanding market, and Harry Nichols of Albany-based Allison, Jackson and Nichols sees his job as part peacemaker.

“A lot of bad feeling will grow between a creditor and a debtor,” he says, “even though the two companies may have been doing business for years and years. Now there are hurt feelings. We get in there and work through those emotional issues.”

Commercial collection generally works on a company-to-company basis. “We’re called in when a company feels it’s being wronged by another company. A debt has gone unpaid and we’re called in to determine what’s wrong. Usually it’s a cash flow problem, and our job is not necessarily to force payment but to get to the root of the problem, set up a payment schedule, smooth over any bad blood that may have come up between the companies.

“I’m like more of an adjustor than a bill collector. We get a lot more involved in dispute situations: improper delivery, poor goods, that kind of thing.”

The average retail store or dentist’s office hasn’t got the resources or desire to hound a delinquent customer. Says Waple, “Merchants can do their own dunning by purchasing a kit of forms, but that’s intended as a comprehensive campaign. If the debtor pays on the first or second form, the merchant has lost money on it. In the long run, the merchant or professional will find it more economical to work with an agency.

“Our success rate is about 33 percent, which is above the national average of 28 to 29 percent. Not all debts are collectable: the world is full of deadbeats and skips.”

Briggs is sympathetic to the plight of the cash-poor consumer. “Our feeling is that every person is a nice person. We have no grudge against anyone. But people still will say we’re harassing them when we try to collect. I know a lot of people want to pay their bills but they get in a bind. The biggest mistake they can make is they don’t talk to the creditors. But they learn it’s easier to face up to them than go through something like garnishment.”

The collection process he describes is straightforward and twofold. It begins with a letter from the agency. “That letter usually prompts about eight percent of the consumers into some type of action, either a payment in full or an arrangement for payment. But we figure that the client has already sent some letters, so if the consumer doesn’t respond to our first letter, he probably won’t respond to any others. That’s when we move in a different direction.”

He indicates the background of his office, a collection of desks at which his employees work the telephones, coordinating cases by means of hand-filed index cards.

“We like to collect payment in full, but we can work out payment schedules. We had one person who paid $30 a month for four and a half years to work off a debt.”

Says Waple, “The most drastic measure we can take is to refer the case to an attorney for suit or seizure. At which point it costs the consumer so much more, because he’s then liable for court costs and attorney’s fees. New York State doesn’t have assignment laws in effect at this time, in which the agency becomes the assignee and is then able to take legal steps. You do find that in midwestern states.”

There is a type of collection maverick known as a “factor.” Robert Castledine operates Capital District Factors, Inc., and offers what the agencies don’t: cash up front.

“I buy accounts outright, paying the client a straight percentage that we agree on for the case. Then I go out and collect on it. I’m one of the better collectors in the area because I have the added incentive of making my money back.”

He believes most businesses would rather work through him “if they knew about me, because they often have to wait three, four, five years to collect from an agency, and they’re paying the agency a percentage of anywhere from 25 to 40. But they get the money right away from me.

“When I go in to buy accounts I may review up to 700 of them. We look them over and mutually arrive at the percentage I give them, which could be ten or 15 or 20 percent. All the accounts then are mine.”

His final recourse also is through an attorney, but he warns, “I never give up on them. Eventually it may come to a legal action, but I try everything else I can first.

“I’ve been doing collections for 30 years and factoring for three. I’ve been in a position to use agencies from time to time and discovered they’re really not all that good.”

The agencies, of course, would differ. Waple takes pride in the longevity of her company. “I have run this business for 26 years. It’s the oldest in the area under the same ownership. We’re headquartered in Troy, but we do service in Albany and Schenectady, too.

“We’re a member of the American Collectors Association, and I’ve served as a director for that association. We’re also in the Society of Certified Credit Executives and the International Credit Association.”

Says Briggs: “This is a business like any other business. There are certain rules you have to go by. There’s a certain amount of money you have to make to meet your overhead and pay your salaries.”

He brings 16 years of experience to the business, and speaks with avuncular wistfulness. “You get ten dollars in your pocket and you see something you think you have to have. I know how it works. But so much of it is wasted money. We’ve all lived through it. I told all four of my kids, `Look, pay your bills, don’t get in over your head,’ but I knew they’d have to work it out for themselves and make all the mistakes I made at their age.”