From the Stove Dept.: Leave the Albany area, which remains stubbornly regressive in its restaurants, and you find the influence of the Culinary Institute at most of the better eateries. Both of the books have been updated, and much has changed at the school since I wrote about it in 1996, so I’ll be updating the piece below before too long.

WHAT'S THE DIFFERENCE between the professional chef and the one who cooks impressively at home? Both have access to the same equipment – in fact, I recently sprang for a restaurant stove so I’d have that same 20,000 BTU cooking power in my kitchen – and the same ingredients are available if you know where to look. What’s different is attitude. The trained chef knows techniques, is intimately familiar with the taste and texture of ingredients and has no fear of experimentation when departing from recipes. 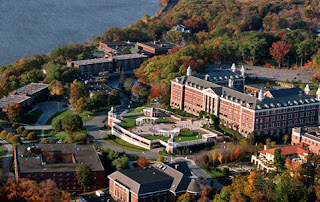 The New Professional Chef is one of two new books produced by the Culinary Institute of America, the Hyde Park, NY, school where some of the world’s finest chefs-to-be receive their training. The books – the other is Exploring Wine – do such a fine job with their subjects that I visited the CIA to learn more about the training conducted there.

The school was started 50 years ago in New Haven, CT, and the former Culinary Institute of Connecticut outgrew both its name and its location. In 1972, the institute found its new home overlooking the Hudson River, on a 150-acre campus built as a Jesuit seminary.

Although towering Roth Hall is the architectural centerpiece, the school has been steadily growing and adding buildings – one of the more recent of which is the Conrad N. Hilton Library, housing over 44,000 volumes of culinary titles (one of the largest collections in the country) and the 150-seat Danny Kaye Theatre, where we were invited to watch one of the ongoing Master Chefs presentations.

It’s a handsome room, with tablespace enough for the audience to note and sample what’s being demonstrated in the fully-equipped kitchen below. TV cameras offer closeups on overhead screens, and document the proceedings for later video study. We watched as Michael Lomonaco, executive chef of New York’s 21 Club, prepared whitefish fillets with morels and asparagus. He’s a dynamic speaker, conveying a sincere passion for food as he stressed the use of fresh ingredients, grown in season, celebrating an American approach to cooking that has grown quickly in past ten years – thanks in no small part to the influence of the CIA. “This is what excites me about being an American chef,” said the Brooklyn-born Lomonaco. “Working with products that I get from individuals who actually grow and care for the products.”

He was applauded by a rapt crowd of white-coated students, many of them no doubt dreaming of achieving a similar fame. Being at the helm of 21 is no small feat, of course, but that city’s expensive – which is one reason why we’re seeing CIA grads in prestigious positions throughout the Capital Region. 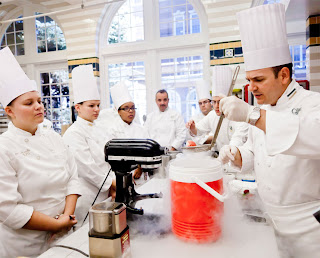 Our tour of the facilities allowed us to peer in on kitchen after kitchen of students working with pastry, working with fish, preparing vegetables or simply absorbing a lecture. The Institute’s four restaurants put the students to work, preparing meals that range from the traditional in the American Bounty Restaurant to the classic French in the award-winning Escoffier Restaurant. In fact, the Escoffier repeatedly wins top honors despite the fact that its kitchen staff changes every few months, a tribute to the consistency that the CIA teaches.

Over 2,000 students are currently enrolled in one of the Institute’s two 21-month Associate’s Degree courses – covering culinary arts or baking and pastry – or the 38-month Bachelor’s Degree program. And there are hundreds more who participate in the shorter continuing education courses offered throughout the year.

You’ll probably only enroll in one of those if you’re planning to cook professionally. For the home chef – or the food enthusiast who wants to make the most of dining out – the books are spectacularly thorough. The New Professional Chef starts with 400 pages of procedures, including a look at equipment, knife skills, menu planning, and some of the cooking basics. Then there are over 700 pages of recipes that take you from basic stocks and sauces on through the most mouthwatering entrées imaginable – many of which seem so inapproachable on a restaurant-served plate, but which prove to be simple to make once you learn the basics.

In fact, this book will enhance your appreciation of food even if you never cook one of the dishes detailed therein, but I doubt if you’ll be able to resist. Originally devised as an in-house textbook, the newest edition opens it up to general use as well, and should be a staple of the cookbook library of any food enthusiast. 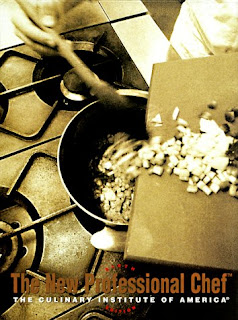 Exploring Wine, its companion, treats the cultivation and tasting of wine with the same thoroughness, in a similarly accessible text. Beginning with a look at wine production, it takes you through the grape varieties, tours the winemaking regions throughout the world and then looks at wine and food pairing, which makes a lot more sense once you understand the makeup of wine. The final section presents wine in a restaurant setting, with good advice for the foodservice professional that won’t be wasted on an intelligent consumer.

I can’t stress too highly how well written and nicely designed these books are. They will enhance the life of any food lover, and should be required reading for anyone who makes a living with food.