From the Fridge Dept.: New York’s Capital Region is being dragged willy-nilly into something approaching the 21st century as its dining public comes to grips with the fact that fresh local food is going to be made available no matter how assiduously they avoid the increasing numbers of farmers’ markets. Here’s my account of meal held six years ago that featured two of the state’s most appealing products.

THIS EXAMPLE OF FINGER FOOD really was no bigger than your finger. A crisp pecan topped with a mini-marshmallow-sized puff of blue cheese mousse. Perched vertically above, like a tiny sail, was a triangular gala apple wedge. Comprising a little bite that did its job quickly, sparking the palate with a classic combination of tartness, sweetness and crunch. 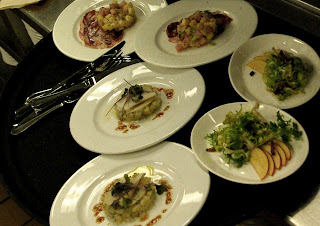 Another classic combo: pork sausage and sage. How about combining them by wrapping a dollop of said sausage in a sage leaf, lightly breading and deep frying it?

Then there’s the challenge of pairing apples and pork. For another finger-food item, spread a crouton with apple butter and top with a pork-based pâté.

Thus did chefs Brian Molino and Erin Boyle meet the challenge of taking two abundant local ingredients and devising a fancy meal. And this was only a part of the first course, a succession of tray-passed hors d’oeuvres.

The event was the third Farmer/Wine Evening at Marché, the fine-dining restaurant at 74 State Street (the hotel’s address is its name) in Albany. Obtaining ingredients locally has become a growing priority among better chefs everywhere, and the Capital Region, which typically lags behind the rest of the country by a decade or two, is catching up.

Part of the impetus for this comes from Boyle, who spent time in San Francisco kitchens. “When I moved back east, it’s been hard to find any produce with flavor,” she says. “California has been doing this for 20 years, but it’s harder here because we have a much shorter growing season.”

Along with incorporating local ingredients into the regular Marché menu, she and executive chef Molino decided to feature those ingredients in these special dinners as well. “As soon as we did the first one,” says Molino, “the farmers have been coming to us. They all know one another, so it’s easy to get recommendations.

For this dinner, at this time of year, the first choice was an easy one: Indian Ladder Farms, the venerable Altamont orchard now in its fourth generation of family ownership. A popular pick-your-own destination, the onsite store now supplements its own fruit with produce and products from other nearby suppliers, making it more of a one-stop food source.

As Indian Ladder president Peter Ten Eyck observes, each dollar spent on a local apple, beyond buying a fresh, healthy product, goes to employ local people who themselves can then afford to give to the community.

Meat for the Marché meal came from heritage pigs raised by Flying Pig Farms in Shushan, where Jennifer Small and Michael Yezzi also raise chickens for meat and eggs. It costs more, of course, to raise animals in a safe, humane manner, and so the meat costs that much more than the factory-farmed supermarket meat we pretend to enjoy.

“Like the farmers themselves, we try to use all parts of the animal,” says Molino. “It inspires you to be creative, and it opens a new experience for the diners.” Hence the fourth course, testa, from the Italian word for “head.” In this case, the meat in the head of a pig, traditional ingredients of head cheese, but here cured into a hefty crimson sausage well ringed with fat. Sliced paper-thin, a few slices were presented alongside a the tiny cubes of a potato and honeycrisp apple salad.

Apples co-starred with snapper in a first course in which the fish, firm but raw, was married with thin fruit slices; as an intermezzo, a serving of apple sorbet drew added tartness from an accompanying sprig of baby pinot noir grapes. Having sampled apples raw, marinated, pressed into cider for consommé and frozen into that sorbet, what remained? Baking them, of course, and thus it was that they appeared in the form of individual sweet cakes, served for dessert with a Calvados cream.

Pork snuck in alongside apples again in a salad whose greens also came from Flying Pigs Farm. This time crunchy lardons of bacon nestled with the frisée, with a gala apples adding all the tartness the course required.

“Not all apples are the same,” Molino says, “so we wanted to show off the flavors and textures of the different varieties. For example, we used apple cider and chicken stock for the consommé, but we also cooked it with the apple skins. Our chicken stock is standard stuff, which is by no means clear.” The traditional consomme clarifying technique calls for a “raft” of egg whites that serves to draw out the brew’s impurities. “The apple skins did that for us, and we were surprised by the result.”

Pork made an appearance in the soup, too, in the form of Italian-style sausage wrapped in house-made pasta, submerged like wontons.

And pork had its own entrée showcase, in a traditional roasted leg cooked pink and served with chestnuts and porcini mushrooms – a nice alternative to the more familiar chops, and certainly far more flavorful than the bland commercial product.

“The more I read about how they’re growing produce and animals,” says Boyle, “the more I realize there’s no excuse for not trying this. As I explore our strange relationship with food, and the eating disorders, obesity, diseases, I wonder why us? Why now?” She is part of the international Slow Food movement, which seems to redress these problems, “and I follow their philosophy of bringing people closer to their food, literally, in miles.

“I want to help the local farmers who are producing wonderful ingredients, so the dinners arose as a way to showcase these products and get the word out to the public.” The next such event takes place Oct. 26 and features items from Schagticoke’s Denison Farm and Elihu in Valley Falls.