Guest Blogger: P. G. Wodehouse. He was the drama critic, among other writing duties, for the U.S. version of Vanity Fair during the century-ago ’teens (he wrote for the U.K. version a decade before that), just as he was gaining Broadway success as lyricist for shows written with Jerome Kern and Guy Bolton. This Wodehouse essay is subtitled “They Want to Be Blithe and Gay, But Their Life Is Just One Derned Play After Another.”

BEFORE I REACH for my hammer and endeavor to work off the cold fury engendered in me by the early productions of the spring theatrical season, let me first say a word on behalf of dramatic critics. A dramatic critic is a misunderstood man. There is a general impression that he loves to knock. Such is not the case. He starts out at the beginning of his career, full of joy and optimism, glowing with happiness at the thought that, while other men are digging down into their gents’ trouserings for the price of admission, he, because he is a critic, can slide into theaters free.

So buoyant does this reflection make him that at first he thinks he is going to like everything be sees. But gradually the modern dramatist sours him. The catch in being a critic is that you cannot pick and choose; you have to take the rough with the smooth, the good with the bad; and there is so much more bad than good. If life were all “Fair and Warmers” and “Cohan Revues” and “Hit-the-Trail Hollidays,” I should be the sunniest little creature on earth—a sort of Josephus Daniels. Instead of which, I go about the place with a black scowl on my face. My dog cringes when he sees me. Children scream and have fits if they encounter me unexpectedly in the street. And all because I have had to see “Pay-Day,” “The Blue Envelope,” “A King of Nowhere,” and “The Heart of Wetona” on successive nights.

“PAY-DAY” IS IN A class of its own. It is not really a play at all. It is a galvanized corpse like that one of which the late Edgar Allan Poe wrote so breezily and with such arresting attention to detail. It started out by being a good, honest, decent failure, such as we all have written in our time. It really died on the opening night, but was artificially stimulated into a grisly parody of life by an enterprising management.

If the management had acknowledged the decease and buried the body, one would have respected their grief and refrained from jumping on the grave; but when they say, in effect, “This is the worst play that was ever written, but we meant it to be bad because it is supposed to be a funny skit on a bad motion picture drama,” it is trying one too high. If the precedent is established that a bad play can be kept running by the simple announcement that it is intentionally bad, where are we?

It may be a purely personal prejudice, but I cannot help feeling that a lovely woman loses her kittenish charm to some extent when she has leprosy, which is the cheery ailment which the authors of “Pay-Day” wish on Irene Fenwick in the last act; and it may have been for that reason that I enjoyed Miss Fenwick’s performance less than when I last saw her—in “The Song of Songs.” She did not seem happy in the part. Though of course it is asking a good deal of anyone to expect them to be happy in a role which sends them to prison twice in the course of the play and finally deposits them on the Island of Molokai. Vincent Serrano worked like a beaver, but he, too, seemed oppressed by his environment.

BY THE TIME these remarks appear in print, the backer of “The Blue Envelope” will probably have announced that that play is intended to be a satire on old-fashioned farce and that the authors meant it to be as bad as it is. Frank Hatch and Robert E. Homans wrote “The Blue Envelope”; and if there were any old farce situations which Hatch forgot, Homans remembered them. The thing is a kind of Irish stew of all the materials which used to go to make a farce. There are six doors in the first act set; there is a stout man who has an affair with a blonde adventuress; there is a stout comic servant; there is a packet of compromising letters; there is the man in love with the ingenue who discovers that his supposedly dead wife is alive; there is a peppery colonel; there is a fight with the police; and there are hidings under beds. The authors have gathered a full hand.

The pathos of the actor’s lot is borne in upon one by a visit to “The Blue Envelope.” So excellent is the work of Walter Jones and his colleagues that there are many moments when they triumph over the badness of their material. There is hardly a gleam of humor in Walter Jones’s part except what he puts into it himself, yet he causes a great deal of laughter, especially in the last act. Carrie Reynolds, with even fewer opportunities, does almost as well. To me, Ralph Nairn was the best thing in the piece. He has the gift of making a tiny part stand out. One of these days he will get a really good part and will make a big hit.

EXCEPT FOR THE FACT that it gives Lou Tellegen a picturesque role and shows that King Henry VIII was the pioneer of Keystone Komedy, there is not much to be said about “A King of Nowhere.” The first two acts are terribly weak, but a slapstick “single” by Henry at the beginning of the third helps things along splendidly. In spite of the fact that the play is written to exploit the Lou Tellegen character, Godred, there is no doubt that Sidney Greenstreet’s Henry is what people will come to see, if they come to see the play at all. Godred is too artificial a part to be really appealing. It is ten years behind the times, recalling the good old days when historical novels sold their million copies and costume plays in which the hero struck attitudes in the moonlight to the accompaniment of soft music filled the theaters for whole seasons.

But Henry is new; or, if not altogether new, has the eternal appeal which touches all of us and enables Weber and Fields to crowd the Palace and Charlie Chaplin to draw a six hundred and seventy thousand dollar salary. The only dramatic suspense in “A King of Nowhere” lies in the fact that you never know when Henry is going to start throwing cushions and candlesticks. 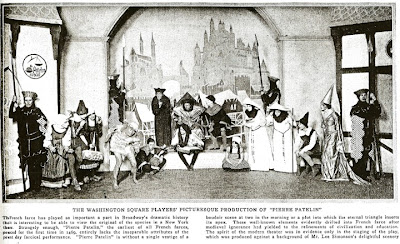 (Note: The necessity of going to press early makes it impossible for us to wait and see whether the management will announce that “A King of Nowhere” is intended to be a satire on the old-fashioned costume play.)

THE FLAW IN “The Heart of Wetona,” George Scarborough’s drama at the Lyceum, to my mind, is that the villain gets into such a confoundedly tight place that one’s sympathies go out to him, and it is a shock when he is finally killed by the Indians while dashing for safety. It seems to me that the author might have increased one’s respect for the hero and reduced one’s sympathy for the villain by making the former do something ingenious and dashing and save the latter’s life. As far as the hero’s relations with the heroine go, there is no need to kill Anthony Wells. Wetona has already seen through him and overcome her infatuation for him, and it would undeniably be more effective if John Hardin, instead of standing indoors and saying “Well, they’ve got him” when he hears the shots, were to save him somehow. (How? Ah!)

Anthony Wells was too much the under dog to be really disliked by the audience. When a man is shut up in a house with an angry husband who is wavering as to whether to shoot him, while at the same time fifty—count ’em, fifty—peevish Comanches are hanging around outside, waiting for him, one cannot help feeling that it is the author’s duty to let him get away safely. Besides, one could not help admiring Anthony Wells,—partly because Lowell Sherman who played the part, has a pleasant personality, and partly because a man who can continue to make love to somebody else’s wife while the husband is standing at his elbow with a revolver and a gang of Indians are waiting outside for him is some performer and compels respect.

“THE HEART OF WETONA” is one of those plays which are supposed to draw automatically from the critic enthusiastic remarks about the genius of David Belasco. I suppose the thing is raised to sublimity by the Magic Touch of the Wizard and all that sort of thing, but myself I could not detect the symptoms. The play is adequately produced, but there is nothing wonderful about it, either in the writing or the staging. The acting is good, notably that of the aforesaid Lowell Sherman, John Miltern, William Courrtleigh, and Lenore Ulrich. There is also a good kitten in the cast.

JOSEPH BROOKS’ Annual and Amazing Aggregation of Astounding Stars broke loose this year in Haddon Chambers’s excellent play, “The Idler,” modernized and polished up and re-christened “The Great Pursuit.” Marie Tempest, of course, made the biggest success. Honorably mentioned, Montague Love, better than he has been since Grumpy, Charles Cherry, and Jeanne Eagels.