Bach is Coming Back, PDQ

From the Concert Vault Dept.: Peter Schickele recently announced that he is going to “reconvene P.D.Q. Bach concert touring in the 2013-2014 season.” It’s been three years since he last did so, and devotees of the composer whose works Schickele tirelessly has discovered over the years know that the once-annual Manhattan concerts are a thing of the past. He’s offering two programs: The Jekyll and Hyde Tour and The What’s Your Sign? Tour.  Both of them, he writes, “provide large doses of P.D.Q. Bach music with some Peter Schickele music thrown in just to provide some relief from the madness.” In celebration, I offer a look back at a P.D.Q. appearance at Proctor’s Theatre back in 1986. My Schenectady Gazette review is followed by my Metroland advance, with a bit of Heifetziana thrown in because it was on the same page and I don’t know where else to put it.

WHEN PROFESSOR PETER SCHICKELE presents the music of P.D.Q. Bach, there are two formats he commonly employs. One is a concert with full orchestra, as happens at the end of every year in New York City. The other is called “The Intimate P.D.Q. Bach” and utilizes a small ensemble of piano, singers and stagehands. The latter was brought to Proctor’s Theatre Monday evening and proved yet again that show holds its own after 15 years of steady touring. 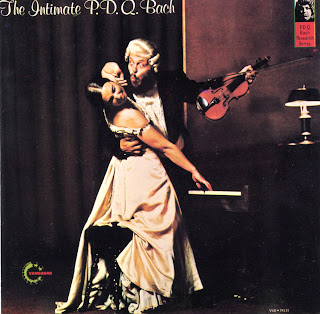 This is Schickele at his most theatrical. The musical discoveries, themselves hilarious in their own right, take a back seat to the onstage carryings-on, all committed in the name of lampooning concert traditions.

There is much to lampoon. If you’ve ever seen, say, a concert pianist glowering over his shoulder at latecomers, you would appreciate the hard time stage manager William Walters gives those slinking in ten minutes after showtime.

Schickele himself works from a lectern (after a dilatory arrival) and tells outrageous stories about this ersatz composer and his ersatz music, suffering the hisses and catcalls of a delighted audience as he cracks pun after pun.

The musical portion began with a sonata for bassoon and piano: P.D.Q. Bach’s “Sonata Abassoonata.” Due to the late arrival of pianist David Oei, Schickele was forced to play both parts with amazing dexterity. It’s an effective opener, too, because it helps set the characters that are used throughout the show: Schickele is the harried professor determined to present the show at all costs; Walters is the no-nonsense stage manager, Tom Cherry is his not-too-skilled assistant.

Countertenor John Ferrante sang the second number, “Shepherd on the Rocks with a Twist,” with Schubertian sincerity: that would be funny enough but Schickele provided an obbligato on tromboon – “a hybrid of the trombone and bassoon featuring the worst characteristics of each” –  and lasso d’amore, which looks like nothing more than a vacuum cleaner hose but produces an amazingly sweet sound when swung, like a lasso, at varying speeds for the different notes.

The “Goldbrick Variations” put Oei at the keyboard and Cherry at a succession of electrical boxes to keep the piano light going. Unfortunately his work was marred by a succession of well-timed power failures and a most explosive finale.

A slide-illustrated lecture can be a dreadfully boring thing, so Schickele took on that tradition with a talk on the life and times of P.D.Q. Bach. He is a very funny speaker: his material is good and benefits from the frequent freshening it gets – and his timing is deadly.

The finale, a little operetta titled “Hansel and Gretel and Ted and Alice,” is fun from start to finish. And it’s wonderfully silly. Contrasted to P.D.Q. Bach’s full-length opera. “The Abduction of Figaro,” you would find that “Figaro” stands more on its own as a musical work. “Hansel” needs the frantic staging it received – two singers play a multiplicity of roles – and is thus a perfect cap to the evening.

Not too long ago I saw a kinescope of a 1951 Spike Jones show. Here, too, was the same inspired silliness, coming from a similarly well-skilled group of musicians. And it explains “The Intimate P.D.Q. Bach” a little better: this is one of the few shows that legitimately can call itself vaudeville in all the best aspects of the term.

And the more precious the target – heaven knows the classical music world takes itself much too seriously at times – the funnier the lampoon.

PETER SCHICKELE HAS FRIENDS who think that, having spent over 20 years discovering the works of the notorious P.D.Q. Bach. Schickele should devote himself to more “serious” works.

The professor disagrees, and since April 1965 has been maintaining a schedule that includes five months on the road with the music of P.D.Q. Bach as well as time to compose and promote his own works.

Locally, we have the opportunity to celebrate St. Patrick’s Day with “The Intimate P.D.Q. Bach” at Proctor’s at 8 PM Monday. Schickele arrives in town with bargain-counter tenor John Ferrante and pianist David Oei, along with the redoubtable Manager of the Stage William Walters.

The program will feature an illustrated lecture on the life and times of the last and least of J.S. Bach’s many offspring, as well as “Hansel and Gretel and Ted and Alice,” an opera in one unnatural act. “It’s for two singers and seven characters,” says Schickele, “which sounds like something out of Pirandello.”

He spoke from Clearwater, Florida, last week, where he was beginning this leg of the tour. “From here we go to Tampa and work our way up the coast.

“I think a reason for P.D.Q.’s staying power is that even after you know the jokes, it’s nice to listen to. I work as hard on the P.D.Q. Bach .discoveries as I do on my own compositions. Also –  I’m going to blow my own trumpet here a little bit – P.D.Q.’s full-length opera “The Abduction of Figaro” has just been released on videotape. I think it’s one of the most successful of his works, and even if you don’t know traditions of grand opera, you won’t not enjoy it.”

Shown on the Bravo network and rumored to hit PBS in the future, “The Abduction” has been released by Video Arts International and won that company’s second consecutive award from Video Review magazine, which selected “Abduction” as “Best Music Program (Classical)” for 1986.

It’s a video recording of the world-premiere performances that took place at the Minnesota Opera in April 1984, with a cast that includes LeRoy Lehr as Al Donfonso, Dana Krueger as Susanna Susannadanna, Bruce Edwin Ford as the servant Pecadillo and Marilyn Brustadt as Donna Donna. Old friend John Ferrante also appears as Opec.

If the music of P.D.Q. Bach were a one-joke enterprise, a two-hour opera would be a bore. But this is a parody that is so affectionate it can stand up on its own as a legitimate entry into the canon of comic opera.

The video production is superb. I’m no fan of opera on TV when it’s a matter of a couple of stationary cameras, but this version obviously was planned from the beginning to make the best use of cutting and composition. Recorded in hi-fl stereo, it also proves just how good TV sound can be.

And you’ll appreciate Schickele’s Masterpiece Theatre-type introduction. Wait until you hear who introduces the opera itself.

ANOTHER NEW RELEASE from V.A.I. is the 1971 TV special featuring Jascha Heifetz, recorded for the Bell Telephone hour.

In 1969, sportswriter Roger Kahn published an article in Life magazine depicting the then 68-year-old virtuoso as a lonely old son-of-a-bitch who wouldn’t perform again. This annoyed Heifetz enough to prompt him to make the television appearance, which showed the violinist still in full command of his abilities performing solo, with piano, and with orchestra, as well as giving lessons, strolling along the Malibu beach and tinkering with his electric car.

A highlight of the show is what is practically a 13-minute close-up of Heifetz as he plays the Bach Chaconne: you can understand how he got the reputation both for unparalleled ability and a certain remoteness.

The program went through a number of changes as it moved from network TV to PBS: the four brilliant encore pieces expanded to the six originally recorded (short works by Mozart, Prokofiev, Rachmaninoff, Debussy, Korngold, and Gershwin). The Bruch “Scottish Fantasy,” filmed with the French National Orchestra conducted by Heifetz, was shortened after the filming for the network; it eventually was restored to its full length for yet another release, at the expense of three of the encore pieces.

The V.A.I. tape is almost complete: Korngold’s “Garden Scene” is missing, but the Bruch is intact. The hi-fl stereo sound, although unavoidably a little hissy, is very superior to the original mono track, although there is a curious mismatching of sound to picture during certain camera angles throughout the Bruch.

No other performer has let the cameras explore his playing so closely; the Heifetz mystery is still intact. Get this tape and marvel at it. “Heifetz” and “The Abduction of Figaro” are priced at $59.95 apiece and are available in VHS and Beta; if a local outlet doesn’t have them, write to V.A.I., P.O. Box 153, Ansonia Station. New York 10023.