From the Drama Vault Dept.: Sometimes the subject to be reviewed suggests, by its nature, a style of writing that echoes the subject. I most often find this practice annoying. Which doesn’t mean I’ve never succumbed. Here’s my review of a classic temperance melodrama that played at the Cohoes Music Hall in 1986.

IT CANNOT BE DENIED that the problems of intemperance are worthy of the full dramatic treatment such as was rendered Sunday night at the Cohoes Music Hall. Surely the reaction of the crowded house proved that many are so affected in private life and are grateful to find expression of a topic so difficult otherwise to discuss. 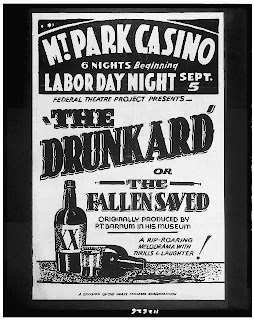 “The Drunkard, or The Fallen Saved” also is a welcome relief from the hectorings of temperance lecturers, some of whom have visited this self-same hall of late. The grim story is dressed in the fine clothing of melodrama, adorned with charming and instructive melodies, and acted by a professional cast who have poured heart and soul into their impersonations.

Particularly riveting is the performance by Mr. Edwards, from New York, of the hero Edward Middletown, who was received with cheers from the audience. It was whispered that Mr. Edwards could not possibly have given so fine a pantomime of the effects of delirium tremens had he not an actual experience to draw upon, but it must be remembered that he is, after all, resident of a city in which far worse may be glimpsed in tavern and street.

Lovely Miss Susan Sarber was the peach-cornplected Mary Wilson, whose plight as alcohol-widow touched many hearts and was the occasion of several outbursts of grief.
A fouler monster than the vile Lawyer Cribbs scarcely could be imagined, and Mr. Brockmeier, the actor, was subject to much catcalling and hissing, a practice that seems to be on the rise and threatens to overwhelm the drama in progress at times. Nevertheless, a more detestable creature never has trod the stage, and the author of these notes must confess that he, too, joined in the general abjuration.

It is sad to report that the timely appearance of Mrs. Carrie Nation, as portrayed by Mrs. Marilyn O'Connell, was the subject of ridicule by the dramatists, who chose to insert in that scene an immoral song and dance, “Have Another Drink,” scarcely suitable for the ladies and children in the audience. It must be observed, however, that a higher moral tone was achieved when the fine work of the Salvation Army was recognized in Act Three.

Miss Linda Jane Ammon presented the song “Waiting at the Church” during the Act One olio, underscoring the capriciousness and deception that can threaten a young lady, too easily smitten by the charms of a roué.

Also participating in the drama were the Messrs. Pinckney and Charles, strong-voiced young men whose previous contributions to the Heritage Artists productions have been noted in this column. Miss Lorri Harrison, who portrayed young Julia Middleton, child of the dissolute Edward, sang tribute to a father-that-was in “Since Daddy's Been Taken Away.”

Many of the songs were written by Mr. B. Manilow, reflective of his considerable talent in the days before he saw a rise in his personal fortune, which led to a downfall in talent curiously foreshadowed in this play.

Prof. Marty Jones was pianist and conductor, and drew upon his considerable knowledge of modern song to illuminate the scenes. He also led the cast in a medley of familiar songs before the beginning of the show, and added musical color to a tableau vivant offered in celebration of the dedication of the new statue “Liberty Enlightening the World,” soon to be displayed in New York Harbor.

Further entertainment was provided by a prestidigitator, Mr. Chad Currin, whose work with fire and small animals was so devilish as to frighten some of the weaker-spirited ladies of the audience.

Col. D. A. Holdgrive made a most welcome return visit to the Music Hall to supervise this production, a most stylish entertainment that ranks with the best of anything to be found in this part of the country. Performances of The Drunkard will continue through July 12.

A telephone lately has been installed in the offices of this cool and comfortable hall, and reservations may be obtained by ringing BELgrave-7969.