“I ENJOY YOUR BOOKS very much,” the letter probably began. I never kept a copy of it. I was eight or nine when I wrote it. It was my first piece of fan mail, written to the man whose impressive body of work fueled my reading enthusiasm during those early, crucial years. 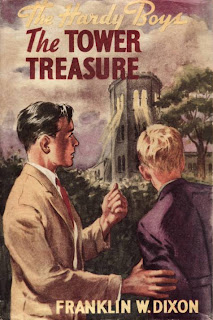 Stories of any kind fascinated me, and I couldn’t wait to be able to read them to myself. My mother obliged with long sessions during my pre-school years in which she’d read to me and insist I read right back to her, “with expression,” she’d say. “Make believe you’re the character who’s speaking.”

Which meant that I brought to The Poky Little Puppy a dramatic intensity that might well have set author Janette Sebring Lowrey into a swoon. I could read it to myself when I was four; by the time I entered kindergarten, any kid’s book was fair game, and I was given the task of reading aloud to my fellow students at the end of the day as the teacher straightened up the classroom.

My family had just moved to Glen Rock, New Jersey, where they bought a large stucco-sided Craftsman bungalow. It seemed a place of endless warrens, and I found great play places in attic and basement. But best of all was the discovery of a box of books: a couple of dozen Hardy Boys mysteries. Once again, I needed parental assistance in getting the words off the page, and I was terrifically frustrated when I had to wait for that help.

Which only spurred me to get better at it myself. Those brilliant brothers, Frank and Joe, pursued crooks, frolicked with friends, traded barbs with sour old Aunt Gertrude – they even raced iceboats, which seemed to me as exotic as life could get. First time through each book there was a mystery, but I re-read those titles to soak up still more of the atmosphere. And when I could persuade a parent to part with a buck and a quarter, I’d add another Hardy Boys title to my collection.

When we moved to Ridgefield, Connecticut, the collection came with me, of course. I had just started second grade, but my reading and math skills were so high that I was bumped into third – setting the stage for the ongoing disaster that became my schooling. Those first few years were so unchallenging that I acquired no work-study skills. So when the assignments got difficult, I floundered. (The only reason I complete such work these days is that I get paid for it.)

Fantasy was my solace – in this case, the fantasy world of those intrepid teen detectives. Even the author’s name – Franklin W. Dixon – suggested someone of high social class and great learning. I decided to write him a fan letter. “Where do I send it?” I asked my mom. “Send it in care of the publisher,” she suggested, pointing to the copyright page. “Grosset and Dunlap.”

Within a couple of weeks, a reply awaited when I got home from school. It wasn’t from the author himself but, as his secretary explained, Mr. Dixon was pleased to know how great a fan I was of his work. I couldn’t have been more delighted. The author of the Hardy Boys books – pleased to hear from me! I took the only logical next step. I wrote again to invite him to my house for dinner.

Once again, the secretary’s reply was polite, but such a visit was not something possible what with Mr. Dixon’s busy schedule. I was disappointed, but tried to be philosophical about it. At least I’d established contact.

It wasn’t very long after that – when I was in fifth grade, I believe – that my class had a session with the school’s new librarian. She was eager for us to have access to all the marvels that awaited us once we nailed that Dewey Decimal stuff. “Does anyone have a favorite writer?” she asked the room.

Laura Ingalls Wilder was very big with some of the kids – girls, of course – and there must have been a vote for our fellow Ridgefieldian Maurice Sendak. But I knew my answer carried an extra edge of sophistication. “Franklin W. Dixon,” I said.

“You mean the Hardy Boys books?” the librarian asked. “There is no Franklin W. Dixon. That’s the name used by a committee of writers who turn them out. In fact, I’m glad you brought it up, because it’s interesting the way they do that. There are only five or six plots they use for that series, so a writer is assigned one of the plots and has to make a story out of it.”

I tuned her out. My face was burning. I’d proudly showed some of my classmates those Dixon letters. I felt duped. Humiliated. And this, this librarian made those books sound somehow second-rate.

Thus I was never able to enjoy them in the same way again. Ah, but literature rewards you for moving on. A Wrinkle in Time was just around the corner, and my sixth-grade teacher spent sizeable chunks of classroom time reading to us the entirety of The Hobbit and The Lord of the Rings. When I returned to mysteries, a few years later, it would be to the work of Dashiell Hammett and Raymond Chandler.

I revisited the Hardy Boys many years later, trying out a couple of their books on my daughter, wondering if she might be provoked to discover the enthusiasm they had inspired in me. Nope. She preferred Nancy Drew.
Posted by B. A. Nilsson at 11:01 PM