MY FIRST CAR, which I bought when I was 17, was a three-year-old orange VW Karmann-Ghia, its discounted price of $600 the result of damage to the right side of the body as well as a trio of bullet holes in the passenger-side door. The damage, incurred, the seller told me, when she was forced off the road by a too-aggressive driver, was so side-localized that the car looked fine when viewed from the left. The bullets had been fired into it while it was parked on a street in Waterbury, Conn., where the seller lived. Three rusting holes perforated the door; the slugs themselves had traveled into the driver’s-side door. You could hear them rattle when giving the door a shake.

At the time, I had a part-time job in record store in a new strip mall in Ridgefield, Conn., where I’d lived for the preceding decade and from which high school I’d (barely) graduated. My family had moved the year before, so I room-rented from a friend’s family. My expenses were fairly low, but my income was pathetic.

I figured I’d save money by doing my own car repairs. This I learned from a legendary book: How to Keep Your Volkswagen Alive, by John Muir, a spiral-bound volume the grease-stained pages of which indicated which procedures I performed most often.

Thus I was changing oil (no filter – just a drain screen to clean), changing and gapping plugs, setting valve clearances, replacing shocks and brakes, learning that the tools needed for the tasks cost more than part-time work was netting. Following a brief, unhappy stint working at an electronics assembly bench, I went into the restaurant business.

I began as a waiter, fibbing my way into the job by giving as references the names of two restaurants in Illinois, where my parents lived, that had gone out of business recently. I soon shifted from afternoons at a casual eatery called The Country Bistro to tuxedo-clad evening work at a white-linen place in nearby Westchester County called The Horse and Hound Inn.

Fine dining and sparkplug gapping don’t coexist well. An unscrubbable layer of darkened oil gloved my hands, and my nails sported black crescents that no amount of excavation successfully removed. I concentrated on scraping the thumbnails and kept the other fingers hidden behind whatever I was serving.

My first repair-gone-wrong was a brake job, replacing the shoes on the rear wheels. This required the wheels to come off the axles, which needed persuasion, and the replacement of same when the shoes were fitted. One wheel was so recalcitrant that I finally took a sledge to it and smacked it in place. One long drive and a few hours later, the splines on the drum completely sheared away. Contact between them and the axle splines drove the wheel. Now it spun freely. The car stopped accelerating. I abandoned it, walked to the nearest town (Kent, Conn.), and phoned for a ride.

Back home, I set to tracking down a new drum. When I showed up at my next work-shift, I was confronted by cops. The car was registered to my work address, but in the meantime someone on the police force remembered where my family had lived, phoned the next-door neighbor, learned my now-divorced mother’s current number, and called her to say that her son’s car had been found, abandoned, on the side of a rural road, its door riddled with bullet holes. My mother called anyone she could think of in Ridgefield. An impressive posse of family friends had been hunting for me. “You’d better call your mom,” one of the cops said sternly. “Right now. And then explain the bullet holes.”

The steering box eventually grew so gear-worn that it took a complete revolution of the steering wheel before a turn would initiate. This distressed my passengers and ruined at least one budding romance. 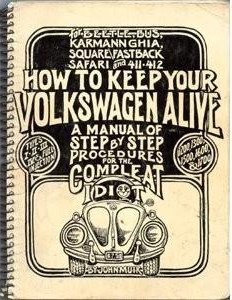 Not long after I successfully dropped a junkyard replacement into place, the generator died. This was impossible to junkyard-source, and I was forced to order one, full-priced, through the J.C. Whitney catalogue once I’d saved enough money for it. Meanwhile, the battery couldn’t charge. I was forced always to park on enough of a grade to allow me to roll the car, in neutral, until it picked up enough speed so that I could pop the clutch and start the engine. This is a very handy and now practically unknown skill.

My best repair-gone-wrong was the result of getting too cocky (or lazy) with maintenance, letting a valve job go way too long. I’d driven from Ridgefield to Storrs, where a friend who attended the University of Connecticut had found an LP I’d been seeking for years (Beethoven trios played by Heifetz, Primrose, and Piatigorsky, if you must know).

On the way home, well past midnight, heading through Hartford, the car’s engine coughed convulsively and died. I persuaded it to start again. I made it as far as Danbury, where it gave a terrific shudder and stopped with a thoroughness that allowed no doubt of the finality of its demise. I walked to a nearby hotel and sat in the lobby until morning, when I could phone a friend for a ride. I memorized the program notes on the back of that LP.

We chain-towed the car to where I was living, an apartment house that fortunately had both basement and garage space. We rolled the Ghia into a garage bay and, with the Muir book at my side, I removed oil filter and other protrusions, unbolted the engine from the transmission, lowered the engine as far as a borrowed transmission jack would allow, and, with three muscular friends, lifted the car body up and over it.

When I got the engine on the basement bench and parted its halves, a shower of metal cascaded forth. One of the valves was seized in place. The camshaft was broken into three pieces. The crankshaft was bent. The pistons were welded to the cylinders, one of which was split like an exploded cigar.

A friend of the chef I worked for gave me an engine block and crankshaft. I had to buy a camshaft and pistons and cylinders and much, much more from the Whitney catalogue, accumulating them as I could afford them. Thus the rebuild job stretched through a winter, during which I hitchhiked to work and back.

Muir couldn’t overstress how important it was to keep the components clean. I watched with dismay as grease got into everything. But the parts-packages arrived, I fitted them into place, and by spring I had the block back together and called for my crew to help me reinstall it.

I’d already learned that the last thing you want to tell a professional mechanic is that you work on your own car. There’s an expression that sits between contempt and pity that crosses the other’s face. Worse is to confess that you rebuilt the engine. Worst of all: to so-confess and add that it won’t turn over. They loved that at the garage to which I towed my vehicle. Even more, they gloried in revealing the diagnosis: “You got the distributor in backwards.”

After which my Karmann-Ghia was alive once more, its compression levels better than ever. I gloried in its reanimation even as the brakes grew sloppy and I dragged out Muir again. The master cylinder needed to be replaced. I ordered one from Whitney. My roommate, ignorant of its brakelessness, borrowed it for a quick errand. It met its end against a Buick. The Buick was undamaged; the Ghia was toast. Thankfully, the fates have seen fit to clog car engines which annoyances ranging from fuel injection to computer modules. My fingernails sparkle.