From the Wine Cellar Dept.: Sure, we’ve got wine stores a-plenty throughout the Capital Region. But this was nowhere near the case 25 years ago, when Mortie Schwartz toiled tirelessly and cheerfully in his small shop on Albany’s New Scotland Avenue, sharing his incredible knowledge and endless inventory. When I wrote the article below, for Capital Region magazine, he was 85. He died six years later, but it’s a tribute to his legacy that the store endures.

DECEMBER 5, 1933: With the kindly insight that Americans shouldn’t be forced to be both poor and sober, the government has repealed the Volstead Act. Liquor sales are about to begin again. Legally, that is.

Standing in front of a shop on Albany’s State Street that day were young Mortie Schwartz, his brother and a friend. “We hired a truck and driver,” Mortie recalled recently, “and as soon as we got word that Prohibition was over, we drove to Troy, to a wholesale druggist who had a liquor license. He gave us 14 or 15 cases of liquor – that’s all he would let us have – and we got back to State Street to find a crowd waiting in front of our store. They helped us carry the cases in and rip the tops off, and in 40 minutes we were sold out.”

This was how he began in the business of selling strong waters, and he has continued to do so ever since with ever-increasing acclaim. Today, Mortie Schwartz is recognized as one of the world’s most knowledgeable wine merchants, and in this age of hyperbole, that’s a literal fact.

Like the product he favors, he has aged well. Dry and mellow, with a good nose and sturdy legs. His hearing isn’t what it used to be, but he aids it with electronics. At his age – a fact he’d just as soon keep to himself – few can lay claim to the survival of most of the senses; Schwartz has sacrificed the one sense that isn’t important to a wine connoisseur.

That crowd clogging his little store that historic day was not after vintage clarets, nor were the flocks of customers that followed. So what steered Schwartz in the direction of the noble grape?

It started with a trip he made to Hammondsport, New York, to the Gold Seal Winery. “They brought me out there to see their operation,” he said, “and I had the chance to talk to a lot of experienced people about wine. That got me interested. After that, I did a lot of reading-and a lot of tasting.”

A few years later, Schwartz took a trip to the winemaking districts of France, Germany, and Italy, a trip that became an annual venture. Over the years he has made a lot of friends in the business, and they in return have paid him the honor of inducting him into Europe’s leading societies of wine experts.

Schwartz is still selling wine from the same store (265 New Scotland Avenue in Albany) where he moved two years after repeal. He runs the place with the help of a staff chosen and trained to maintain the store’s tradition of insightful service. And as he gently retires from the business, assistant Jim Ryan has stepped comfortably into the breach.

But what a tough act to follow! As we talked in the tiny store, Schwartz gestured to the wall behind the sales counter where a glass case displays a collection of medallion-studded colorful ribbons and sashes, such as a visiting dignitary might wear.

One of the largest is striped in red and white with fur trim – the decoration of the Jurade de Saint Emilion, an English lawmaking group that occupied French land back in the 12th century. As the French regained control of the area, the old man explained, the group became a wine society. 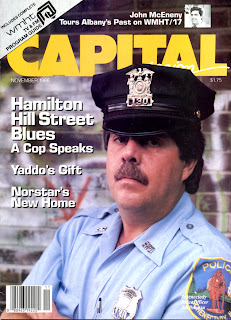 “The Jurade meets in a church that was built in a hollowed-out rock,” said Schwartz. “I think it’s the largest structure in the world of its kind. And on top of the rock is a very splendid restaurant. Every fall there is a ceremony in which the head of the Jurade stands on top of the rock, and in a great big basso voice that you can hear for twenty miles calls out, ‘Let the vintage begin!’ And that’s the official start of the wine season.”

A sash striped in green, ivory, and brown signifies L’Ordre des Coteaux aux de Champagne. Ten years ago Schwartz had the honor of being one of the few Americans ever taken into the society. “And the ceremony featured one of the finest meals I ever had,” he said fondly. “It started in the garden at Chateau Canard, where Canard-Duschene champagne is bottled. This garden was manicured, and Madame Canard wore a gown that exactly matched the flowers. Which was no accident, I tell you.”

After a meal effervescent with glass after glass of exotic champagne, the two American inductees and their wives wanted to dance, “so Papa Canard banged on the table and three or four waiters appeared. At his instruction, they kicked a million-dollar carpet aside and couples took to the floor.”

Many more societies are listed on Schwartz’s calling card: two columns of them in tiny type. And there are more diplomas and certificates on the back wall than you’d find in many a doctor’s office.

The Wine Shop has all the charm of a half-century-old business. The space is long and narrow with just enough room for a customer to walk sideways down an aisle, inspecting labels. And once you get past the few shelves of hard stuff, it’s a United Nations of wine.

“We have tasted most of the wines we sell,” said Schwartz as he strolled by a line of bins with the pride of a farmer inspecting a particularly fine crop. “I don’t include the commercial wines that we are forced to carry because of advertising, but we don’t buy anything else without sampling it first. The average little store doesn’t know a goddamn thing about wines.”

Knowledge of wine begins with those first few sips. You judge and remember; you compare. And it helps if there is someone – headwaiter, salesman – marking the trail for you. Schwartz and his staff do so at a little table in the back of the shop, where a couple of bottles await a tasting. “This is a white wine we will carry if we like it,” he said. “It’s been sitting here a couple of days to rest from shipping.

“We want to carry not merely good wine, but wine that goes a step better. You can find most of the advertised names in any store, and you’ll find most of them to be pleasant and drinkable. But not really worth going across the street to buy  second time.”

How many cases does The Wine Shop stock? “I really couldn’t tell you,” said Schwartz with a grin and a shake of the head. “But I can show you.”

A steel door at the store’s rear opened onto a skeletal staircase; below was the cool basement, with walls of brick and a ceiling of long-hanging, rough-hewn beams. And case after case of the good stuff: new, white boxes at the loot of the stairs, boxes yellowed with age towards the far wall.

“There are some wines we keep down here just because there isn’t room enough upstairs. But there are some that we’re not planning to touch for several years – until the wine is really ready.”

A basement bulb flickered from a power surge. Schwartz’s eyes looked large in the dim light, the faded blue of the sky in an old painting. “I hope we can continue to treat our wines as well as we try to treat our customers,” he concluded. He was spry going backup those stairs. They say that wine keeps your arteries from clogging; this man is vintage proof.

A customer – obviously a regular – approached with a great big grin. “Mortie!” he cried. “Give me a wine that’s gorgeous!”

A sardonic shake of the head. “Can’t help you,” he replied, deadpan. “I can give you a wine that’s beautiful, but the only thing that’s gorgeous in this store is me.”

Later, he returned to a favorite theme. “People who make wine are invariably very friendly. People who sell wine are also friendly. Mostly. It’s just getting more difficult to find them.

“But I suppose that’s one thing you can count on as you grow older,” he mused. “Everything gets different.” Seated at the little table in the back of the store, he eased the cork out of the wine under examination and poured samples for himself and his staff.

The tasting began with the eyes, appreciating the wine’s color and body. Next the nose and palate, rolling the fluid across the tongue where it released its goodness in a quiet explosion.

Then the nod, the smile, the look round the table, the grins of agreement as a new treasure was added to The Wine Shop’s bins.