From the Vault Dept.: Just to emphasize the disconnect between the snow on the ground and the start of spring, here’s a piece I wrote a couple of years ago about the food of love, such as there is.

OGDEN NASH, IN “Reflections on Ice-Breaking,” epitomized it thus: “Candy / Is dandy / But liquor / Is quicker.” Chocolate and booze are distinguished staples of courtship, but sometimes you just want to hit the sack. Is there any grub that will help? 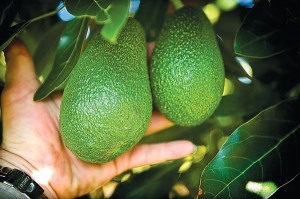 We are an admirably goofy species. We name a favored destination “pudendum,” from a Latin word (phrase, actually) meaning “something of which to be ashamed,” and go on to obsess about it. We note that nature has scattered phallic and pudendal whatnots hither and yon, and decide that if it’s in the least bit edible, it will send magical powers to the thus-aped place. From the travesty of killing rhinos for their horns to the silliness of wolfing down forests of asparagus, we’ve ingested plenty in pursuit of a reliably randy-making nostrum.

Recently I presented a class on this theme, where we looked at a list of putatively aphrodisiac foods and cooked and sampled some of them. Although I can’t vouch for any farther-reaching effects, I can tell you that nobody’s morals were challenged during our time together. Herewith, a few recipes. Try them as part of your own Valentine’s Day tête à tête, but keep in mind that the most effectively phallic items on your table are the candles with which you illuminate the meal.

Avocado: Not phallic so much as testicular – or so the Aztecs decided when the named the tree that’s the source of this fruit the “testicle tree” because avocados hang in suggestive pairs. It’s a nice addition to salads, good on its own with a splash of vinegar, and, of course, the foundation of guacamole. Garlic, another component of this dish, has many magic-bullet adherents, while nutmeg has a history as a Chinese love dust.

Guacamole (Serves 4 or so)

Peel avocados and discard (or grow a tree from) the pit. Chop into small chunks and put the chunks in a bowl. Peel, smash, and chop the garlic cloves. Add to the bowl. Peel and dice the onion. Add to the bowl. Add enough lemon juice to moisten the mixture – probably a couple of ounces. Add the cumin and a dusting of nutmeg, and mash the whole mess with a fork. Salt and pepper to taste. Hot sauce is optional. Tomatoes make it a different, more Californian, dish. Serve with tortilla chips.

Asparagus: Gets its supposed amatory power from its phallic aspect, which ought to have us also gnawing on baseball bats. The Vegetarian Society suggests eating asparagus for three days “for the most powerful effect,” which will be realized post-micturation if nowhere else. The best part this recipe may be the Hollandaise sauce – not acknowledged as an aphrodisiac per se, but sinful enough to count for something.

Asparagus with Hollandaise (Serves about 6)

Make the Hollandaise sauce first. Clarify more butter than you think you’ll need – you lose about 25 percent of it in the process. Putting a few sticks in a saucepan over very low heat. Avoid the microwave – you want to keep an eye on it to prevent it from boiling. Once the butter is melted, remove it from the heat and skim the foam (whey) from the top with a ladle.

In a heavy-bottomed saucepan, combine the egg yolks, a splash of lemon juice, a teaspoon of mustard and a dash of Worcestershire sauce. Froth it together with rapid strokes of a balloon whisk. Place the saucepan over medium heat and continue to whisk the mixture with a steady rhythm, taking care that the egg yolks don’t solidify at the corners of the pan. When it reaches a firm consistency and pale yellow color, remove the saucepan from the heat, continuing to whisk all the while.

Ladle the butter from its saucepan taking care not to get any of the milk solids that float at the bottom. Add the butter to the egg yolk mixture in a steady stream until you reach a desired flavor and consistency.

Add about two inches of water to the bottom section of the steamer and place over medium-high heat. Snap the woody bottoms from the asparagus and place the spears in the steamer’s upper section. Add salt, pepper, and a dash of lemon juice; steam the asparagus until the thickest stalks are tender but still crunchy. Top each serving with a ribbon of Hollandaise.

Almond: Samson wooed Delilah with almond branches and look where that go him. But the aroma is supposed to drive ladies wild and keep the guys from wiping out too soon, which has caused that essence to appear in desserts, perfume, even bathwater. Frangipane is a classic almond tart. This recipe eliminates the need for a crust. It also works in pineapple,  a homeopathic treatment for impotence, but more reliable as a component of rum-based beverages.

This can be topped with any sliced fruit after it’s baked.

Peel the pineapple, removing as much of the tough spots as possible. Core the pineapple. Slice enough thin wedges to more than cover the top of the tart pan, reserving about a half-cup of chunks.

Preheat oven to 350 degrees. Prepare the tart pan with a coating of butter. Put all of the ingredients except the pineapple slices in a food processor and process until fairly smooth. Spoon the mixture into the tart pan. Bake the tart for 25 to 30 minutes. As it cools, fan the pineapple wedges across the top, overlapping as you go. Give it a brief turn under the broiler if you like. Heat the apricot jelly and use a pastry brush to coat the top of the pineapple slices with it. Cool, dislodge, and serve.

Chocolate: The Aztecs, who clearly pondered these things, called chocolate a “nourishment of the Gods.” Chocolate contains chemicals thought to stimulate the brain’s neurotransmitters. It offers more antioxidant enzymes than red wine, but that’s no reason not to combine the two, per Ogden Nash’s advice.

Chill a bowl and the mixer beaters. Heat (double boiler or microwave on low) the chocolate, butter, and espresso until melted. Stir and let cool until warm to the touch. Whisk in the egg yolks.

Pour the heavy cream into the chilled bowl. Whip with the chilled beaters; as the mixture grows stiff, add the vanilla and 2 tbl sugar. Whip to a state of not-too-stiff peaks and refrigerate. In a clean bowl, and with clean beaters, whip the egg whites, adding 2 tbl sugar as it stiffens. Whip to the consistency of shaving cream.

Fold the whipped cream and the egg whites into the chocolate mixture, alternating as you go, working the mixture as little as possible. It should look still mossy when complete. Spoon into serving dishes and chill; garnish with chocolate shavings.