The Community Masque as a Substitute for War

Guest Blogger Dept.: And who better than Robert Benchley to help us through this traumatic summer? Drawings by Gluyas Williams.

WITH WAR AND LICKER REMOVED from the list of “What's Going on This Week,” how will mankind spend the long summer evenings? Some advocate another war. Others recommend a piece of yeast in a glass of grape-juice. The effect is said to be equally devastating.

But there is a new school, led by Percy Mackaye, which brings forward a scheme for occupying the spare time of the world which has, at least, the savor of novelty. It presents the community masque as a substitute for war. Whenever a neighborhood, or county, feels the old craving for blood-letting and gas-bombing coming on, a town meeting is to be called and plans drawn up for the presentation of a masque entitled “Democracy” or “From Chrysalis to Butterfly.” In this simple way, one and all will be kept out in the open air and will get to know each other better, thus relieving their bellicose cravings right there on the village green among themselves, without dragging a foreign nation into the mess at all. The slogan is “Fight Your Neighbors First. Why Go Abroad for War?”

The community masque idea is all right in itself. There certainly can be no harm in dressing up to represent the Three Platoon System, or the Spirit of Machinery, and reciting free verse to the effect that:

“I am the Three Platoon System. Firemen I represent,
And the clash and clang of the Hook and Ladder Company.”

No one could find fault with that, provided that those taking part in the thing do so of their own free will and understand what they are doing.

The trouble with the community masque is not so much with the masque as with the community. For while the masque may be a five star sporting extra hot from the presses of Percy Mackaye, the community is the same old community that has been getting together for inter-Sunday School track-meets and Wig and Footlight Club Amateur Theatricals for years and years, and the result has always been the same.

Let us say, for instance, that the community of Wimblehurst begins to feel the lack of a good, rousing war to keep the Ladies’ Guild and the men over thirty-five busy. What could be more natural than to call in Mr. Mackaye, and say: “What have you got in the way of a nice masque for a suburban district containing many socially possible people and others who might do very well in ensemble work?” 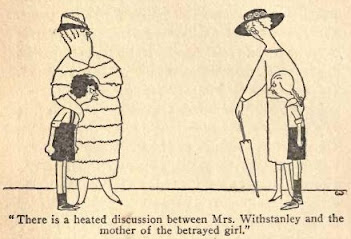 Something entitled “The March of Civilization” is selected, because it calls for Boy Scout uniforms and a Goddess of Liberty costume, all of which are on hand, together with lots of Red Cross regalia, left over from the war drives. The plot of the thing concerns the adventures of the young girl Civilization who leaves her home in the Neolithic Period accompanied only by her faithful old nurse Language and Language’s little children the Vowels and the Consonants. She is followed all the way from the Neolithic Age to the Present Time by the evil spirit, Indigestion, but, thanks to the helpful offices of the Spirits of Capillary Attraction, and Indestructibility of Matter, she overcomes all obstacles and reaches her goal, The League of Nations, at last.

But during the course of her wanderings, there have been all kinds of sub-plots which bring the element of suspense into the thing. For instance, it seems that this person Indigestion has found out something about Civilization’s father which gives him the upper hand over the girl, and he, together with the two gunmen, Heat and Humidity, arrange all kinds of traps for the poor thing to fall into. But she takes counsel with the kind old lady, Self-Determination of Peoples, and is considerably helped by the low comedy character, Obesity, who always appears at just the right moment. So in the end, there is a big ensemble, involving Boy Scouts, representatives of those Allies who happen to be in good standing in that particular month, seven boys and girls personifying the twelve months of the year, Red Cross workers, the Mayor’s Committee of Welcome, a selection of Major Prophets, children typifying the ten different ways of cooking an egg, and the all-pervading Spirit of the Post-Office Department, seated on a daïs in the rear and watching over the assemblage with kindly eyes and an armful of bricks.

This, then, is in brief outline, “The March of Civilization,” selected for presentation by the Community Council of Wimblehurst. It is to be done on the edge of the woods which line the golf-course, and on paper, the thing shapes up rather well.

Considerable hard feeling arises, however, over the choice of the children to play the parts of the Vowels and the Consonants. It is, of course, not possible to have all the vowels and consonants represented, as they would clutter up the stage and might prove unwieldy in the allegretto passages. A compromise is therefore effected by personifying only the more graceful ones, like S and the lower-case f, and this means that a certain discrimination must be used in selecting the actors. It also means that a great many little girls are going to be disappointed and their mothers’ feelings outraged.

Little Alice Withstanley is chosen to play the part of the Craft Guild Movement in Industry, showing the rise of coöperation and unity among the working-classes. She is chosen because she has blonde hair which can be arranged in braids down her back, obviously essential to a proper representation of industrial team-work as a moving force in the world’s progress. It so happens, however, that the daughter of the man who is cast for Humidity has had her eyes on this ingénue part ever since the printed text was circulated and had virtually been promised it by the Head of the House Committee of the Country Club, through whose kindness the grounds were to be used for the performance. There is a heated discussion over the merits of the two contestants between Mrs. Withstanley and the mother of the betrayed girl, which results in the withdrawal of the latter’s offer to furnish Turkish rugs for the Oriental Decadence scene.

Following this, the rougher element of the community – enlisted to take part in the scenes showing the building of the Pyramids and the first Battle of Bull Run – appear at one of the early rehearsals in a state of bolshevik upheaval, protesting against the unjust ruling which makes them attend all rehearsals and wait around on the side hill until their scenes are on, keeping them inactive sometimes from two to three hours, according to the finish with which the principals get through the prologue and opening scenes showing the Creation. The proletariat present an ultimatum, saying that the Committee in charge can either shorten their waiting hours or remove the restrictions on crap-shooting on the side-hill during their periods of inaction.

There is a meeting of the Director and his assistants who elect a delegation to confer with the striking legionaries, with the result that no compromise is reached, the soviet withdraws from the masque in a body, threatening to set fire to the grass on the first night of the performance.

During the rehearsals the husband of the woman who is portraying Winter Wheat is found wandering along the brookside with her sister cereal Spring Wheat, which, of course, makes further polite coöperation between these two staples impossible, and the Dance of the Food Stuffs has to be abandoned at the last moment. This adds to the general tension.

Three nights before the first performance the Director calls every one to a meeting in the trophy room of the Club-house and says that, so far as he is concerned, the show is off. He has given up his time to come out here, night after night, in an attempt to put on a masque that will be a credit to the community and a significant event in the world of art, and what has he found? Indifference, irresponsibility, lack of coöperation, non-attendance at rehearsals, and a spirit of laissez-faire in the face of which it is impossible to produce a successful masque. Consideration for his own reputation, as well as that of the township, makes it necessary for him to throw the whole thing over, here and now.

The Chairman of the Committee then gets up and cries a little, and says that he is sure that if every one agrees to pull together during these last three days and to attend rehearsals faithfully and to try to get plenty of sleep, Mr. Parsleigh, the coach, will consent to help them through with the performance, and he asks every one who is willing to coöperate to say “Aye.” Every one says “Aye” and Mr. Parsleigh is won over.

As for the masque itself, it is given, of course; and as most of the able-bodied people of the community are taking part, the audience is composed chiefly of the aged and the infirm, who catch muscular rheumatism from sitting out-of-doors and are greatly bored, except during those scenes when their relatives are taking part. The masque is hailed as a great success, however, in spite of the fact that the community has been disrupted and social life made impossible until the next generation grows up and agrees to let bygones be bygones.

But as a substitute for war, it has no equal.