“I ACTUALLY READ WOODY ALLEN’S MEMOIR” is the headline for Caitlin Flanagan’s review of Woody Allen’s new memoir in “The Atlantic.” She bravely attempts an objective look at the book, but she has a Point of View, and eventually crumples beneath it. Her article has worthier substance than many of the other reviews of the book I’ve read, but she remains in thrall to the #metoo-inspired disgust with the venerable writer and filmmaker. 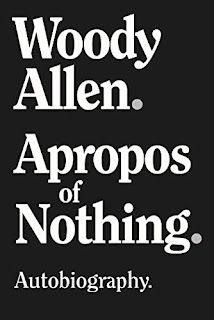 Apropos of Nothing, as you know, had a rocky start. Its original publisher, Hachette, bowed to pressure from Ronan Farrow to drop the book, and ultimately dropped a print run into the shredder. Arcade picked up the title. Despite the many indignant, pearl-clutching reviews in major publications, it turns out to be a delightful memoir, in the main. The trouble is that there’s a large detour as Allen recounts the circumstances that have led him to suffer a baseless accusation and the ensuing unwarranted condemnation.

Many critics accuse the book of being tone-deaf, if not completely out of step with the present, which leaves me wondering what they expected. If you’ve read any of Allen’s excellent short pieces that used to pepper The New Yorker and other worthy publications – and have been collected into book form – you have a sense of his tone of voice and his sense of humor. He’s what I suppose should be termed an old-school comedian, meaning that he was influenced by the likes of S.J. Perelman, James Thurber, and Robert Benchley, who were the best of the early-20th century school of humorists.

There’s no contemporary equivalent. What passes for humor these days is a comedy of cruelty, because the writers have only television as a reference, and television writing, once we left behind the days of Sid Caesar, deteriorated into too-familiar sitcom tropes, churned out, factory-style, to satisfy the relentless demands of advertiser-driven scheduling. There are significant exceptions, of course, but in the main we find predictable meanness. Allen’s humor isn’t mean. Like Perelman, he lampoons himself. Like Benchley, he celebrates his own foibles. And he does so in a unique voice, but a voice familiar from his other writings. Explaining (as he does repeatedly throughout the book) that’s he’s no intellectual, he notes that he never did any reading outside of comic books

until I was at the tail end of high school and my hormones had really kicked in and I first noticed those young women with the long, straight hair who wore no lipstick, little makeup, dressed in black turtlenecks and skirts with black tights, and carried big leather bags holding copies of The Metamorphosis, which they had annotated themselves in the margins with things like “Yes, very true,” or “See Kierkegaard.” For whatever irrational carnal singularity, those were the ones who captured my heart, and when I called for a date and asked if they’d like to go to a movie or a baseball game and they wanted rather to hear Segovia or catch the Ionesco play off Broadway, there’d be a long awkward pause before I said, “Let me get back to you,” then scrambled to look up who Segovia and Ionesco were.

Most of the book shares this breezy, discursive style. There are sections intended to be informative, limned with a lighthearted hand; sections, like the quote above, that take a funny, self-deprecating look at a situation; and, not surprisingly, a fair share of one-liners, like the one attending his birth:

I was delivered in a Bronx hospital though the folks lived in Brooklyn. Don’t ask me why my mother schlepped all the way up to the Bronx to produce me. Maybe that hospital was giving away free dishes.

Allen’s ascent into his unique, celebrated career, begins while he’s in high school, absorbing the writing of classic humorists while learning the routines of contemporaneous comedians. He’s talented and facile enough to create his own stream of one-liners and other jokes, and he sends them to the newspaper columnists of the day who relied on such submissions for the daily stream of witticisms. It begins with a fairly forgotten Daily Mirror columnist named Nick Kenny, who accepted a submission and “I saw my name in print for the first time. Allen Konigsberg says – and then some stupid gag that I mercifully can’t remember.” Yet the prospect of that measure of fame embarrasses him. “But why embarrassing? Why not proud? This is one of those vagaries of the human personality I will never grasp.” He changes his name. Why Woody? “The truth is, it was arbitrary.”

His column appearances pick up, extended to the more celebrated columns of Earl Wilson, Leonard Lyons, Hy Gardner, and others. He parlays this into a regular gig when he’s hired by an agency to continue such work, and it’s not long before he’s writing gags for radio stars Arthur Godfrey and Peter Lind Hayes. “I’m eighteen, making triple what my parents earn put together.” He becomes part of Writer Development Program, which nets him a trip to Los Angeles to help the failing “Colgate Comedy Hour.” He meets Danny Simon and his brother Neil, known as Doc, and credits Danny with teaching him how to hone his comedy writing. 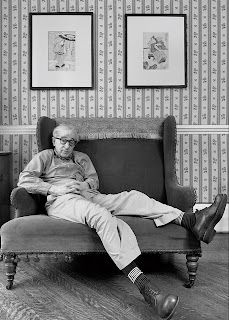 It’s a fascinating saga. We’re in a golden age of television comedy, and Allen winds up writing for the best of them – Sid Caesar. He also meets and begins collaborating with Larry Gelbart; alongside Gelbart and Simon, he writes for talent as diverse as Art Carney and ventriloquist Paul Winchell. And he ends up taking on Jack Rollins as manager, which is how Allen was propelled into nightclub stand-up performances and, soon enough, television appearances, including guest-hosting Johnny Carson’s “Tonight Show.”

And the story takes plenty of turns, particularly through the Allen love life, which at this point included his first marriage and a significant extra-marital affair. Louise Lasser would become his second wife and co-star of “Bananas,” his second movie as a writer-director. As you would expect by now, it’s not a direct route. Plenty of hilarious side-trips as we wend through an array of celebrities and celebrity projects, with this withdrawn comic achieving more and more of his goals – which culminated in making movies along the lines of his heroes like Fellini and Bergman.

He didn’t start out making arthouse features, of course. We begin with the comedies, absurd ones like “Take the Money and Run” and “Everything You Always Wanted to Know about Sex,” moving into more thoughtful comedies like “Love and Death” and “Annie Hall.” We’re halfway through the book when the films begin, and there’s less and less to tell about them as his career continues. He has 55 movies to his credit as director, an amazing variety of titles that have explored almost every possible genre, featuring an impressive roster of stars who were willing to work for Allen at scale. Many successes, many flops – but each of them shows an impressive measure of imagination and craftsmanship.

The trouble is, there’s a sub-plot that soon takes over the story. He meets Mia Farrow, they begin dating. He notes an awareness of her checkered romantic history. They don’t live together. The subsequent 70 pages detail (no doubt in a lawyerly vetted way) the incidents that led to Mia’s accusations of Woody’s sexual abuse of her child. His refutation of those charges, echoed by Connecticut courts, are entirely believable. And there can be no doubt that Mia, crazy to begin with, used those accusations as revenge against Woody when he began dating, and then married, Mia’s adopted daughter Soon-Yi.

There’s an awkward romance, of course, not at all helped by the nude Polaroids of Soon-Yi that Mia discovered in Woody’s apartment. He has a glib explanation for that discovery, which I’m inclined to believe, but there’s a huge measure of stupidity behind it. Nevertheless, it hardly warranted Mia’s campaign to ruin Woody’s life and career.

The many pages of explanation aren’t as funny as the rest of book – how could they be? – but they’re part of the story. And just as the topic seemed about to die away, the Me Too movement erupted and Allen detractors threw him, undeservedly, into that maelstrom. The repercussions have included his loss of distribution for his most recent two movies, which is absurd, and the public renouncements he has suffered from some of the actors who worked with him – and had nothing but good to say about him at the time. (See my review of “A Rainy Day in New York” for more on that topic.)

Apropos of Nothing remains a very enjoyable story. Tone-deaf? Hardly. It’s characteristic Allen, who knows his craft of writing – and, especially, writing comedy – very well. He’s a master. He’s a national treasure. He deserves better. The book explains why.