Guest Blogger Dept.: One of the best-selling novels a century was Booth Tarkington’s Penrod, a collection of stories in the popular genre of Peck’s Bad Boy that was partly inspired by the behavior of his own nephews – and which inspired two sequel books (and one orphaned short story). Here’s a chapter celebrating a boy’s twelfth birthday, very much of its time and yet timeless in many ways.

THIS BUSY GLOBE which spawns us is as incapable of flattery and as intent upon its own affair, whatever that is, as a gyroscope; it keeps steadily whirling along its lawful track, and, thus far seeming to hold a right of way, spins doggedly on, with no perceptible diminution of speed to mark the most gigantic human events—it did not pause to pant and recuperate even when what seemed to Penrod its principal purpose was accomplished, and an enormous shadow, vanishing westward over its surface, marked the dawn of his twelfth birthday. 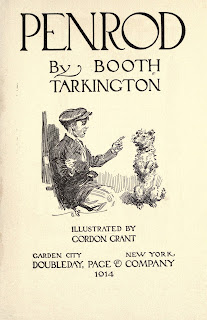 To be twelve is an attainment worth the struggle. A boy, just twelve, is like a Frenchman just elected to the Academy.

Distinction and honour wait upon him. Younger boys show deference to a person of twelve: his experience is guaranteed, his judgment, therefore, mellow; consequently, his influence is profound. Eleven is not quite satisfactory: it is only an approach. Eleven has the disadvantage of six, of nineteen, of forty-four, and of sixty-nine. But, like twelve, seven is an honourable age, and the ambition to attain it is laudable. People look forward to being seven. Similarly, twenty is worthy, and so, arbitrarily, is twenty-one; forty-five has great solidity; seventy is most commendable and each year thereafter an increasing honour. Thirteen is embarrassed by the beginnings of a new colthood; the child becomes a youth. But twelve is the very top of boyhood.
Dressing, that morning, Penrod felt that the world was changed from the world of yesterday. For one thing, he seemed to own more of it; this day was HIS day. And it was a day worth owning; the midsummer sunshine, pouring gold through his window, came from a cool sky, and a breeze moved pleasantly in his hair as he leaned from the sill to watch the tribe of clattering blackbirds take wing, following their leader from the trees in the yard to the day’s work in the open country. The blackbirds were his, as the sunshine and the breeze were his, for they all belonged to the day which was his birthday and therefore most surely his. Pride suffused him: he was twelve!

His father and his mother and Margaret seemed to understand the difference between to-day and yesterday. They were at the table when he descended, and they gave him a greeting which of itself marked the milestone. Habitually, his entrance into a room where his elders sat brought a cloud of apprehension: they were prone to look up in pathetic expectancy, as if their thought was, “What new awfulness is he going to start NOW?” But this morning they laughed; his mother rose and kissed him twelve times, so did Margaret; and his father shouted, “Well, well! How’s the MAN?”

Then his mother gave him a Bible and The Vicar of Wakefield; Margaret gave him a pair of silver-mounted hair brushes; and his father gave him a “Pocket Atlas” and a small compass.

“And now, Penrod,” said his mother, after breakfast, “I’m going to take you out in the country to pay your birthday respects to Aunt Sarah Crim.”

Aunt Sarah Crim, Penrod’s great-aunt, was his oldest living relative. She was ninety, and when Mrs. Schofield and Penrod alighted from a carriage at her gate they found her digging with a spade in the garden.

“I’m glad you brought him,” she said, desisting from labour. “Jinny’s baking a cake I’m going to send for his birthday party. Bring him in the house. I’ve got something for him.”

She led the way to her “sitting-room,” which had a pleasant smell, unlike any other smell, and, opening the drawer of a shining old what-not, took therefrom a boy’s “sling-shot,” made of a forked stick, two strips of rubber and a bit of leather.

“This isn’t for you,” she said, placing it in Penrod’s eager hand. “No. It would break all to pieces the first time you tried to shoot it, because it is thirty-five years old. I want to send it back to your father. I think it’s time. You give it to him from me, and tell him I say I believe I can trust him with it now. I took it away from him thirty-five years ago, one day after he’d killed my best hen with it, accidentally, and broken a glass pitcher on the back porch with it—accidentally. He doesn’t look like a person who’s ever done things of that sort, and I suppose he’s forgotten it so well that he believes he never DID, but if you give it to him from me I think he’ll remember. You look like him, Penrod. He was anything but a handsome boy.”

After this final bit of reminiscence—probably designed to be repeated to Mr. Schofield—she disappeared in the direction of the kitchen, and returned with a pitcher of lemonade and a blue china dish sweetly freighted with flat ginger cookies of a composition that was her own secret. Then, having set this collation before her guests, she presented Penrod with a superb, intricate, and very modern machine of destructive capacities almost limitless. She called it a pocket-knife.

“I suppose you’ll do something horrible with it,” she said, composedly. “I hear you do that with everything, anyhow, so you might as well do it with this, and have more fun out of it. They tell me you’re the Worst Boy in Town.”

“But on his birthday!”

“That’s the time to say it. Penrod, aren’t you the Worst Boy in Town?”

Penrod, gazing fondly upon his knife and eating cookies rapidly, answered as a matter of course, and absently, “Yes’m.”

“Certainly!” said Mrs. Crim. “Once you accept a thing about yourself as established and settled, it’s all right. Nobody minds. Boys are just people, really.”

“No, no!” Mrs. Schofield cried, involuntarily.

“Yes, they are,” returned Aunt Sarah. “Only they’re not quite so awful, because they haven’t learned to cover themselves all over with little pretences. When Penrod grows up he’ll be just the same as he is now, except that whenever he does what he wants to do he’ll tell himself and other people a little story about it to make his reason for doing it seem nice and pretty and noble.”

“There’s one cookie left,” observed Aunt Sarah. “Are you going to eat it?”

“Well,” said her great-nephew, thoughtfully, “I guess I better.”

“Well,” said Penrod, with a full mouth, “it might get all dried up if nobody took it, and get thrown out and wasted.”

“You’re beginning finely,” Mrs. Crim remarked. “A year ago you’d have taken the cookie without the same sense of thrift.”

“Nothing. I see that you’re twelve years old, that’s all. There are more cookies, Penrod.” She went away, returning with a fresh supply and the observation, “Of course, you’ll be sick before the day’s over; you might as well get a good start.”

Mrs. Schofield looked thoughtful. “Aunt Sarah,” she ventured, “don’t you really think we improve as we get older?”

“Meaning,” said the old lady, “that Penrod hasn’t much chance to escape the penitentiary if he doesn’t? Well, we do learn to restrain ourselves in some things; and there are people who really want someone else to take the last cookie, though they aren’t very common. But it’s all right, the world seems to be getting on.” She gazed whimsically upon her great-nephew and added, “Of course, when you watch a boy and think about him, it doesn’t seem to be getting on very fast.”

Penrod moved uneasily in his chair; he was conscious that he was her topic but unable to make out whether or not her observations were complimentary; he inclined to think they were not. Mrs. Crim settled the question for him.

“I suppose Penrod is regarded as the neighbourhood curse?”

“I dare say the neighbours are right,” continued the old lady placidly. “He’s had to repeat the history of the race and go through all the stages from the primordial to barbarism. You don’t expect boys to be civilized, do you?”

“You might as well expect eggs to crow. No; you’ve got to take boys as they are, and learn to know them as they are.”

Aunt Sarah laughed heartily. “Do you think his father knows him, too?”

“Of course, men are different,” Mrs. Schofield returned, apologetically. “But a mother knows——”

“Penrod,” said Aunt Sarah, solemnly, “does your father understand you?”

“About as much as he’d understand Sitting Bull!” she laughed.

“And I’ll tell you what your mother thinks you are, Penrod. Her real belief is that you’re a novice in a convent.”

“I know she thinks that, because whenever you don’t behave like a novice she’s disappointed in you. And your father really believes that you’re a decorous, well-trained young business man, and whenever you don’t live up to that standard you get on his nerves and he thinks you need a walloping. I’m sure a day very seldom passes without their both saying they don’t know what on earth to do with you. Does whipping do you any good, Penrod?”

“Go on and finish the lemonade; there’s about glassful left. Oh, take it, take it; and don’t say why! Of COURSE you’re a little pig.”

Penrod laughed gratefully, his eyes fixed upon her over the rim of his uptilted glass.

“Fill yourself up uncomfortably,” said the old lady. “You’re twelve years old, and you ought to be happy—if you aren’t anything else. It’s taken over nineteen hundred years of Christianity and some hundreds of thousands of years of other things to produce you, and there you sit!”

“It’ll be your turn to struggle and muss things up, for the betterment of posterity, soon enough,” said Aunt Sarah Crim. “Drink your lemonade!”