On the Road Again

THE HEART AND SOUL of David Bromberg’s latest recorded offering, “Big Road,” is an eleven-minute version of “Diamond Lil.” The song, a Bromberg original, first appeared on his second album, “Demon in Disguise,” in 1972. It’s a mainstay of his live performances. But the version that appears here is slower, more deliberate. The refrain, a chant of “A man should never gamble / More than he can stand to lose” carries an unusually high degree of poignancy as the bandmembers join Bromberg in harmony. And then they stretch out into solos that aren’t all that solo, with pairings and back-and-forths deepening the song’s melancholy nature. 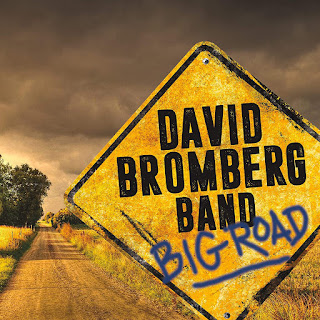 Watch the YouTube video – which is also on the DVD that’s part of the retail package. Watch the interactions among the six players during the give-and-take that characterizes this number. Pianist Dan Walker takes the first solo, a spare, wistful survey of the mood that Bromberg’s first vocal chorus set. His second chorus has deft intrusions of Mark Cosgrove’s guitar, and Walker switches to organ as Cosgrove and Bromberg trade guitar licks, embarking on a conversation that builds in quiet intensity, and it’s Walker who underscores the third verse. But violinist Nate Grower is getting antsy, and there’s a surprising pairing of him with electric bassist Suavek Zaniesienko that manages to be wistful even as it builds on what came before. Behind it all, driving it all, is drummer Josh Kanusky, who keeps things languorous even while pursuing the bluesy drive of the song. And then we’re near the end. A final verse and chorus, and the song slips away.

“Big Road” features a dozen tracks showcasing the Bromberg band’s current five-member line-up, with extra talent joining on some of the numbers. Like all Bromberg recordings, the mix of songs and stylings resists easy categorization. It’s American music, when you get right down to it, a subject that Bromberg knows well, and to which he has contributed impressively.

The title number, getting us off to a rocking start, is a vintage Tommy Johnson song that’s been a favorite of blues fans. Walker is back on organ, with a brass section comprising the amazing Jon-Erik Kelso on trumpet (he can play any style), Birch Johnson on trombone, Mark Koza on tenor sax, and Bob Stewart tweaking the eardrums with his tuba declarations. Producer Larry Campbell wrote the horn arrangements; he also plays pedal steel guitar or mandolin on a couple of numbers.

The brass are back for Charlie Rich’s “Who Will the Next Fool Be?” “He had a hit on it,” Bromberg writes in his liner notes, “but not as big a hit as it should have been. Bobby Blue Bland had the biggest hit with it, and it affected me, so I had to sing it.” It’s an inspiring performance.

There’s a skillfully wrought contrast from song to song, in terms of tempo and idea and in the mood that’s created by whoever’s playing or singing. Bromberg sings and plays alone on “Mary Jane,” a song he learned years ago in New York, paying tribute to the Upper West Side vipers. For Gordon Bok’s sweet “The Hills of Isle Au Haut,” it’s the core quintet of Bromberg, Cosgrove, Grower, Kanusky, and Zaniesienko, with Walker on accordion; the more declarative “Take This Hammer,” a Leadbelly song, puts Campbell on mandolin with the quintet.

It wouldn’t be a Bromberg album without a fiddle medley, and here it’s “Maiden’s Prayer,” “Blackberry Blossom” (“not the tune commonly known by that title”), and “Katy Hill.” Although Grower’s incredible fiddle virtuosity is featured here, it ends with a killer mandolin trio featuring Grower, Cosgrove, and Bromberg.

The traditional “Standing in the Need of Prayer” puts the quintet, a cappella, around a single mic for an effective rendering, and “Roll On, John” finishes the album as it often finishes a live performance, with simplicity (it’s usually performed on stage with no amplification) and love.

There’s no way to overstate the talent on board here. Bromberg has long since established himself as one of the top guitarists on the music scene; his vocal talent is compelling and unique. And he surrounds himself with multi-talented players, who now have worked together long enough to think and perform as one mind. All of which is very much in evidence here.