THERE’S A SCHUBERT SONG known as Ständchen (D. 957 No. 4) that Liszt transcribed for solo piano; a simpler transcription became a very popular parlor-piano piece back when the music-category lines were far more blurred. So it’s no surprise that it was also picked up by pop-music groups: It became “Shivaree” in a 1920 recording by the Six Brown Brothers, a saxophone sextet, and (as “Serenade”) in 1939 by the John Kirby Sextet. Which is only to note that Schubert is among the many classical composers whose music has made its way into jazz. 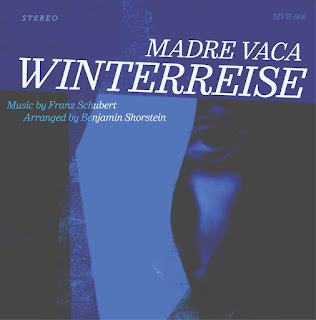 Madre Vaca’s “Winterreise” may be the most audacious such journey yet. This Florida-based jazz ensemble has recorded ten of Schubert’s 24 heartbreaking songs in arrangements by drummer Benjamin Shorstein that prove that, with a little bold inventiveness, these songs can flourish in any setting. And the selections certainly hit the melodic and mournful highlights of the cycle.

The cycle here begins and ends as Schubert’s does, so we start off with “Good Night,” depicting a lonely man’s weary trek through the snow as he abandons a vigil of his beloved’s house. Pianist Pierre takes the first solo, establishing that this is jazzland, not Vienna. Trumpeter Strawley then gives a little bit of New Orleans before saxist Rollan smooths things a little. Behind them, Carter adds the vintage sound of banjo strumming. It’s a collective sound created specifically for this song, which is also the opening one of the Schubert cycle.

“The Weathervane” takes a sudden shift into a free jazz vein, entirely fitting in a song about the vagaries of the wind, while “Frozen” goes in for contrast, giving us a hot Rollan solo.

Latin rhythms underpin three of the selections. “Loneliness” gives a wistful solo spot to Carter on guitar, which is followed by a lean, evocative piano solo; drummers Shorstein and Algood propel “The Crow” into another Latin groove as the melody is chanted by the brass, but that’s just the welcome mat for a Hawkins-esque sax solo that brilliantly evolves the song into a more kinetic direction.

And there’s an oddly appropriate syncopation under “The Stormy Morning,” taken at a faster clip than your average lied singer might attempt, but showcasing trombonist Reed and trumpeter Strawley, taking us into a rollicking Perez Prado groove before it’s through.

“The Grey Head” hews pretty closely to the original melody, showing it to be the kind of ballad that anyone can borrow effectively, and giving Carter room for a thoughtful solo. In complete contrast is the stop-time feel that infuses the beginning of “Last Hope,” right away veering from the original – although that feeling is returned as the piano begins exploring the melody, eventually expanding into a more free-form duet with guitar. It’s one of the more complicated of Shorstein’s arrangements, and a nice contrast because of that.

The final and most painful number of the cycle is “The Hurdy-Gurdy Man,” which leaves the poet-singer in his most abject state of emotional despair as he listens to (and we hear a simulation of) a lonely hurdy-gurdy player. This acquires, in the hands of Shorstein and Madre Vaca, a bit of a John Kirby feel. It’s up-tempo; it’s wistful. It’s haunting; it’s surprisingly hopeful, especially as Shorstein solos our way out of the song.

I wouldn’t have thought such a compelling transformation of these songs was possible. I’ve spent many a night bathing myself in self-pity as I wallow in “Winterreise” recordings. This doesn’t send me into quite the same place, but it’s not supposed to – and I’m going to take this winter journey quite often.