Sax in the City

WHEN DAVE BRUBECK disbanded his very successful quartet in 1967, saxophone star Paul Desmond had spent sixteen years with the ensemble, achieving million-seller status with the album that featured his composition “Take Five” and acquiring a reputation as a witty, thoughtful player who seemed to know every song and solo ever recorded. 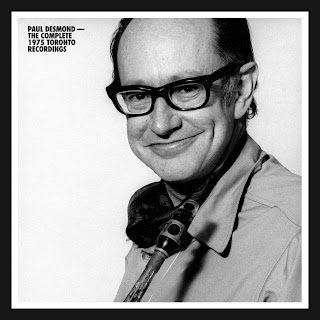 Brubeck was heading in a different direction; Desmond decided to take it easy for a while. “Desmond vacationed briefly in the Caribbean,” writes Doug Ramsey. “Back in New York, he took retirement with reasonable seriousness. Eventually, though, he succumbed to the blandishments of the Cantarino family, whose celebrated Half Note club had recently moved ... to 54th Street in New York’s midtown.” Part of the lure was the fact that Desmond lived a block away. This gig also featured guitarist Jim Hall, an old friend, with whom Desmond made a series of celebrated recordings in the early 1960s for RCA.

They were issued by Mosaic Records in 1987, in long since sold-out LP and CD sets, and have seen light of day on other labels since. They’re worth having both for the music itself, putting together a pair of cool players who interact like twins, and as a baseline from which to appreciate Mosaic’s latest contribution to the Desmond canon: The Complete 1975 Toronto Recordings.
The alto sax wizard was persuaded to travel to Toronto for a gig at the club Bourbon Street. Hall couldn’t make it, and recommended Toronto-based guitarist Ed Bickert. If you know Bickert’s work, there’s nothing more to say. Like Hall, he was a custom-tailored fit for Desmond’s breezy, harmonically rich style. Their quartet was filled out by Jerry Fuller on drums and bassist Don Thompson.

Thompson was also a recording engineer, and Desmond encouraged him to tape the sessions. Some of the results have been released over the years, but this is the first comprehensive overview of what they played at that club in late March and late October, 1975. It’s a seven-disc set that’s easy to listen to when your ears might be pointed elsewhere, and that reveals all manner of riches as you settle in to study the tracks.

First thing worth mentioning is the sound quality, which, for a live club recording, is superior, remastered for this set with Thompson’s help. These are long, relaxed explorations of standards and originals, with a preference for ballads that allow Desmond to stretch out and explore melodic implications in a way that not only plays loose with harmonies (always with a sense of logic and inevitability) but also allows him to recall other tunes that you’d never think could work in that particular spot.

Here he’s matched by Bickert, who obviously knew the Desmond approach well. Bickert hit the stand with no charts, assured by Desmond that the tunes he called would be familiar. The set kicks off with an eight-minute “Too Marvelous for Words,” establishing right away that the Desmond sound would be as creamy as you remember, yet as we reach the bridge Desmond starts to fly, and Bickert nudges the final eight of the first chorus in a darker direction.

Bickert takes a single-note solo for his first chorus that manages to find room for a bit of “Holiday for Strings” before he veers into a more boppish view of the tune. When he gets into full-chord strumming, “Undecided” peeks in. He’s certainly Desmond’s match in the quote department! But he also does some beautiful comping behind Thompson’s high-spirited bass solo. When Desmond comes back in to finish the song, he fires back with a bit of “Polka Dots and Moonbeams.”

And that’s just the first track! There are fifty more, only twenty of which have been previously released. “Too Marvelous” returns on Disc Three, and there are several other repeated tracks as well. But they become old friends about whom you notice subtle differences with each re-meeting.

“Just Squeeze Me” is an Ellington number that gave Ray Nance a vocal feature, and the tune has been embraced by Miles Davis, Sarah Vaughan and a host of others, and it appears four times in this collection, always true to its original conception but inviting a good deal of variation, as I learned by listening to all of them in a row.

A few women sneak into the sets. There’s “Emily,” by Johnny Mandel, setting a slow-ballad standard for the players. Victor Schertzinger’s “Tangerine” is as impish as you remember from Jimmy Dorsey’s hit, and “Nancy” grows deftly out of a medium tempo. I suppose I should include “When Sunny Gets Blue” and “My Funny Valentine” in the distaff list, but I want to call attention to two Desmond originals.

“Audrey” starts with a walking bass that leads to a nimble Desmond melody that sounds more about mood than lyrics, although the name is sax-chanted a few times. It was written as a Desmond tribute to Audrey Hepburn, whom he worshiped. “Wendy,” on the other hand, celebrated a brief romantic attachment, one complicated by the discovery that her mother was also an old flame of Paul’s.

Disc Six changes the sound a bit, although not as drastically as you might think. Bickert’s father died during the October dates, and the guitarist had to miss the last two days of that month. Rather than seek another guitar, Desmond brought in trombonist Rob McConnell. Once again, the combination sounds effortless, and their traversal of some of the repeated numbers (“Things Ain’t What They Used to Be,” “Wendy,” “Line for Lyons,” and others) offer fascinating comparisons. And don’t miss the lively “Let’s Get Away from It All,” a perfect duet number.

Desmond’s most famous song, of course, is “Take Five,” which appears twice in this set. Naturally, you can hear the audience excitement as the famous opening riff sounds, but Desmond wouldn’t be Desmond if he didn’t take it in a completely unexpected direction, opting for some flatted notes that suggested a Middle Eastern modality. According to historian Tom Cunniffe, as quoted in Ramsey’s notes, “‘Desmond leaned over to Thompson and said, “I can smell the camels from here.”’ From that point on, Desmond referred to the piece as ‘Camels’ when calling it onstage.”

As soon as this set was announced on the Mosaic mailing list, it sold out. A second pressing was ordered, and it’s still available as of this writing. But it’s a limited run of 2,500 copies. I wouldn’t wait to make the investment.