I CAME LATE to the Berlioz controversy by coming early to his music. Specifically, to his “Symphonie fantastique,” introduced in a high-school music class but giving off more sparks and surprises than classroom study could cover. How could this wild-eyed tribute to unrequited, blighted love not appeal to a love-starved teen? “Harold in Italy” followed – a found LP of Primrose and Koussevitzky, with side-two fillers of magical moments from “The Damnation of Faust.” So by the time I learned that Berlioz was often derided and his music critically abjured, I could only conclude that these effete music critics were out of their minds. 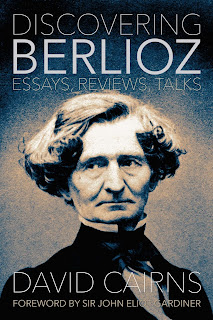 David Cairns is nicer about those people. He doesn’t tire of reminding us of those wrong-headed views, but he and we are in the pleasant position of seeing the fatuity of such pronouncements. He offers no scorn. In his new essay collection Discovering Berlioz, Cairns quotes a 1949 music-history book: “Musicians suffer ... from the slapdash nature of [Berlioz’s] writing, the clumsiness of his style and his incoherent and chaotic methods of composition.” As Cairns puts it, “The old received idea of Berlioz as subverter of artistic law and order continues to arouse feelings of insecurity.” It’s not Berlioz’s fault; nor should it be. There’s a stuffy parlor in the Academy, the denizens of which panic at the approach of revolutionary ideas.

Cairns has championed the Berlioz revolution through a definitive edition (in Cairns’s translation) of the composer’s Memoirs, and a definitive two-volume biography that manages to be both academically thorough and a compelling, can’t-put-it-down account of Berlioz’s tumultuous life. (Berlioz was not allowed to marry his fiancée until he’d won the Prix de Rome, a prize that forced him to spend three years in Italy, during which time she threw him over. (The sequence in which Berlioz, in drag, sneaks out of that country in order to shoot the woman, her mother, and himself is full of hilarious mishap and could have played on the stage of the Opéra-Comique.)
That biography, published in 1989 and 1999, is massive and authoritative, but the first volume came out too early to celebrate and analyze the discovery of Berlioz’s supposedly discarded “Messe solenelle,” written when he was 20, a copy of which lay unnoticed in an organ-loft closet for a century. I wondered, while reading Cairns’s biography, what he would have made of the discovery, and Discovering Berlioz lets us know: “ ... my first reaction was almost one of vexation. The sheer inconvenience of the thing!” Inconvenient, that is, for his biography – but also worrisome lest it should prove mediocre enough to sully the composer’s hard-won critical reclamation. “It is no masterpiece,” Cairns concludes. “Nonetheless, the Mass turns out to have intrinsic qualities beyond its musicological significance and way beyond what one could have expected.” The essay goes on to give a comprehensive history of the piece, then opens it up for a careful analysis.

Originally written to be delivered as a lecture, Cairns’s essay was then printed in an issue of the Berlioz Society Bulletin, and that’s the genesis of many of the essays collected in this book. They were written between 1962 and 2019 for various purposes and publications and are arranged here on a chronological timeline according to the composer’s life.

Cairns introduces himself at the outset with a charming autobiographical note that explains the birth and growth of his interest in the composer – and then we’re off to explore topics more specific than the biography offers.

Begin with the understanding that Berlioz lived within his passions, and pursued those passions into poetry, music, romantic infatuation, and an unbridled worship of nature. He foreswore Catholicism at an early age, and eventually would declare Shakespeare to be his deity. “The sole essence that he worships is art,” writes Cairns in an essay titled “The Distant God.” He quotes Berlioz: “‘To feel its power and worship its beauty, it’s worth submitting to the confidence trick called life.’”

Yet he’s a man of seeming contradiction. “(T)he fact remains that three of his major compositions ... are sacred works, and none of them, the Requiem (1837), the Te Deum (1849), or L’Enfance du Christ (1854), the result of a commission.” Cairns goes on to speculate that those works were the result of the composer’s lifelong fascination “by the idea of music on the grandest scale – music as the soul of a community, a people, as exemplified by the Panathenaia of the ancient Greeks or the celebrations in the Temple of Solomon.”

He lived between a revered vision of the past – one of his earliest musical heroes was Gluck – and a grand desire to inspire humanity to share his passions by way of his music. Yet he conceived such dreams during a boyhood spent in a musically bereft village, La Côte-Saint-André, which prevented him from hearing an orchestra until he arrived, for his higher education, in Paris. Yet, Cairns muses, “the very poverty of the musical environment ... was in a way a blessing. Berlioz was free to dream of what might be.”

Although we hear the influence of Shakespeare throughout Berlioz’s works, both musical and literary, Cairns’s essay “Shakespeare – Our Father” ties the many thread together. He quotes Berlioz’s Memoirs:

Shakespeare, falling upon me unawares, struck me like a thunderbolt. The lightning flash, the sublime explosion, of that discovery opened before me in an instant the whole heaven of art, illuminating it to its remotest depths. I saw dramatic grandeur, dramatic beauty, dramatic truth in their real form.

What’s important to note is that 19th-century France was familiar with Shakespeare’s work, if there was any familiarity at all, in bowdlerized, badly translated forms. When Berlioz saw an English touring company’s performance of Hamlet, in Paris in 1827, he was overwhelmed, both by the play itself and by its Ophelia, Harriet Smithson – and his unrequited passion for her would result in his first symphony, the Symphonie fantastique.

There are a couple of direct borrowings from the Cairns biography, but they serve to shore up the narrative, especially if you’re unfamiliar with the earlier books. “‘Programme Music’ and the Symphonie fantastique” is one such borrowing, but it’s a worthy story, worth repeating, especially as it clears up misunderstandings about the piece that have long dogged Berlioz’s reputation.

Shakespeare more directly inspired his third symphony, sharing the role of muse with another recent discovery: Beethoven. “The ‘Dramatic Symphony after Shakespeare’s Romeo and Juliet’ was Berlioz’s repayment of his debt to the two supreme creators who had shown him the way.” It’s an unusual work insofar as it gives the title roles to the instruments of the orchestra, reserving soloists and chorus for commentary and incidental roles. But the passion that pours forth in those instrumental love scenes is as affecting as it is unique.

Berlioz supported himself for too many years as a music critic, and he was so good at that craft that many found it hard to believe he could be good at writing music, too. Between his memoirs and his critical essays – some of which have found their way into books – he left us plenty of information about his life and work. But an even richer source are his letters. He “loved writing letters and wrote an extraordinary number, even by the standards of his age,” notes Cairns in a review of a 1995 collection of selected missives, and gives us a taste of the composer’s voice in an excerpt from his refusal to make a tour of the United States:

I should be in a fine mess if I’d accepted. The talk there is all of bankruptcies; their theatres and concerts are heading for the Niagara Falls. Ours are in no such danger: there’s no cataract here – there’s no current. We drift about on a placid pond full of frogs and toads, enlivened by the quacking and flapping of the occasional duck.

Several of the composer’s major works are examined, including essays on Benvenuto Cellini, Roméo et Juliette, La Damnation de Faust, Les Nuits d’été, and ultimately, Les Troyens, Berlioz’s penultimate opera and the crowning achievement of his life. This work merits several essays. The source material, Virgil’s Aeneid, haunted Berlioz from an early age; by the time he decided to turn it into a music drama, he had the influence of Shakespeare to guide him through an effective setting (he wrote his own libretto). Cairns also studies significant productions and recordings of the opera, which are a welcome way into the piece.

You don’t need to have read the biography to enjoy these essays. In fact, Discovering Berlioz could serve as a very informative introduction to the composer, although Cairns’s style is charming enough that you may well feel compelled to seek out those two mighty volumes. However you come to it, you will come away much more appreciative of no-longer-neglected artistic genius.