From the Food Vault Dept.: When I moved to Schenectady in 1980, a restaurant near Mohawk Mall (now Mohawk Commons) was the only Indian eatery in the area. But the Maharajah had a staff schism, and, in 1982, a group of them opened the Sitar, a couple of miles east on Central Avenue. That restaurant was very successful for a long, long time, but finally packed it in during the summer of 2016. Here’s my 30-year-old review of the place, followed by my account of a 1986 visit.

ALTHOUGH WE LAST CHECKED IN WITH SITAR in print four years ago, Susan and I usually get out to this Indian restaurant a couple of times a year. But it still had been a while. There's a new addition in back, an airy, glass-topped room that gave us all of last Saturday's daylight and none of the rain that spattered intermittently. 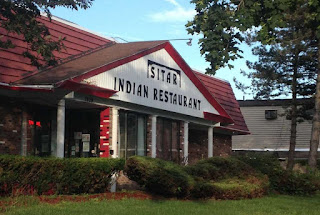 But the menu hasn’t changed. It doesn’t vary much, which is part of the restaurant’s success. Thanks to the careful guidance of owner Adi Irani, a delicious and accessible selection of items remains the mainstay. Nothing is too spicy, but it all reflects the very different seasoning style of the various types of Indian cookery.

And the star of the show still is the large Tandoori oven, a clay oven in a room fronted with a picture window for patron display. There a specially-trained chef wields breads and skewers of meat for the high-heat cooking that renders an item especially juicy.

With such high expectations, then, you can understand if we’re especially critical. We didn’t come away from the dinner disappointed: just concerned.

My first pleasure at an Indian restaurant is Kingfisher beer (Sitar also has the tall Taj Mahal bottles). And nothing goes better with it than the plate of mixed appetizers that heads the hors d’oeuvres list.

It’s a delicious assortment served with a large wafer of papadum, a lentil-based cracker cooked very thin and sparkling with spices. Ours was just losing its crispness, taking on the moistness of too-long storage. The other components – tall, dough-wrapped packages of vegetables known as samosa and the deep-fried veggie pakora were steamy and delicious.

It’s intended for two, but you won’t find heaps of food (that comes later). The presentation was nothing special: a handful of hastily-chopped lettuce was thrown across the pakora and samosa before the papadum was placed, roof-like, over toothpicks. I’d like to see a more considered, eye-appealing plate.

The presentation of the Tandoori items is dazzling. You can’t help but notice: it arrives on a platter audibly sizzling and items are transferred to the plate by a tongs-wielding waiter. I ordered the “Tandoori Sizzler,” a best-of assortment that also includes a side of vegetable curry.

A yoghurt-marinated chicken quarter; broiled chunks of chicken painted with other spices, including lots of turmeric; a sausage of minced lamb formed into a sheek kebab and whole lamb similarly grilled make up the collection, all of it pouring juices from the skewer holes. The way meat should arrive at the table.

The curry was made with cabbage and peas, seasoned with a sensitivity to the light flavors of the vegetables. That’s something Susan appreciates: the Indian way with vegetables. So she generally orders something cooked with spinach (palak).

In this case it was shrimp, which seems almost like an intruder in the mouth-filling bed of spinach and spices. Onions and peppers and those favored seasonings like cardamom and mace go into the mix, and the shrimps bore the familiar yellow skin of a turmeric baste.

Rice pilaf is a standard side dish, a little blander than it needs to be, and the chewy, clay oven-baked flat bread called nan. I enjoy and always order the light, deep-fried bread called puri, which should come to the table looking like a steaming football and release an explosion of steam when torn open. But ours were deflated and fast getting cold.

I suspect this has something to do with the new room, which has only one door for traffic and doesn’t get the constant attention a dining area should have. One waiter generally works your table, although others may serve or clear you. The place got busy soon after we arrived and I think we suffered a little from the onslaught.

Sitar makes its own brew of tea, a sweet, pungent mix with a fruity kick. A nice companion to the kheer I had for dessert, which is an Indian version of rice pudding that’s lighter and much more interesting than the deli fare we’re used to.

There’s nothing to suggest that the problems we saw were anything other than inconveniences of the moment. Try it yourself: it’s the best introduction you’ll find to the magic of Indian food, and I’m sure you’ll go back again and again.

Here’s the review referenced above. This was my tenth restaurant piece for Metroland, back in the day when the magazine couldn’t afford to pay for the meals (that happened at the beginning and at the end of Metroland’s life), and paired me with photographer Drew Kinum for those first visits.

THE FRONT OF THE MENU describes the guitar-like instrument from which Sitar takes its name, and there is a lovely example of one hanging on a back wail of the Central Avenue location. In fact, the whole of the interior is an education from the craftwork on the walls to the clay oven on display through a thick window. 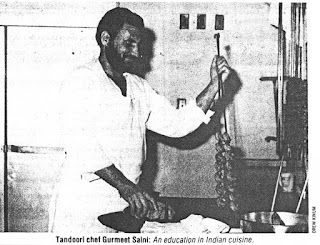 “It’s important to educate the public a little,” says manager Adi Irani, who is usually to be found tending bar and greeting customers. “There are misconceptions about Indian food. People think it is all hot and spicy, all curry. But we feature cooking in the Mughalai style, which comes from Northern India by way of Central Asia. The emphasis is not so much on the spiciness.”

Irani and his staff operated the Maharajah in Schenectady for many years before moving to the new location, which boasts a large, comfortable dining room divided into smaller, intimate areas. The tables have plush, high-backed chairs and service is deft and unobtrusive.

From previous visits I have developed many favorites from the menu: this was Drew’s first experience of Indian food, however, and he arrived with some of those same misconceptions Irani worries about. So, at the manager’s urging, we tried a sampling of popular items.

A tray of Indian hors d’oeuvres includes an array of finger-foods, baked or tried, served with a large wafer of papad, a lentil cracker. Samosas are little patties stuffed with vegetables or meat: pakora Is akin to the Japanese tempura, being deep-fried fritters filled with potatoes, eggplant, or bell peppers. For a piquant kick, a spicy mint sauce is served on the side.

Then we filled the table with two of the sampler platters. The Tandoori Sizzler does literally that as it is rushed from the kitchen: On a bed of tried onions is presented Tandoori chicken, with its characteristic red color and flavoring of spicy yoghurt, and chicken Tikka, a mildly-spiced roast of the dark meat. Then there are the kebabs of reshmi (chicken), sheek (minced lamb), and boti (lamb chunks). A vegetable curry is a side order, and the accompanying bread (nan) is a flat loaf cooked on the side wail of the clay oven.

That oven is a sight worth studying when you visit Sitar: Tandoori chef Gurmit Saini works over a waist-high clay table with two deep pits, both of which have a pile of hot charcoal at the bottom. The meats are skewered on iron rods that conduct the heat to the inside (like a potato nail), and the cooking process gives it the special Tandoori flavor.

To watch the chef as he’s baking nan has the thrill of an amusement-park ride: he forms a flat circle of the dough on a countertop, then mashes it against one of the oven’s inner walls: when it is cooked, he peels it off. By hand. And he doesn’t get burned.

The Sitar Special also offers Tandoori chicken and sheek and reshmi kebabs: add to that, though, a delicious Tandoori shrimp and a rice dish cooked with large chunks of chicken (chicken pillao). Beef korma is cooked in an onion gravy, and there also is a side of vegetable curry.

We sampled another house bread, the puffy loaf called puri, a cross between pita and a football: it’s my favorite, but I have yet to achieve the same giant result in my own kitchen.

We sampled two kinds of Indian beer that the restaurant now carries; Taj Mahal is a golden lager with a more bitter flavor than domestic brews: paler and yet a little stronger is Kingfisher, both of which were quite easy to drink after a few trial sips.

The desserts are all Indian-style; from a selection of a half-dozen, Drew chose the rasmalai, a wedge of sweet ricotta in a cream sauce; I had kheer, a rice dessert that puts the deli pudding to shame.

“More than 80 percent of our customers are regular clientele,‘” Irani told us over coffee. “Once they try the food, they come back. Some travel 80 to 90 miles to come here for dinner.”

He interrupted himself to take a phone order for some Tandoori chicken to go, another service the restaurant provides. “I don’t think we would have survived in Albany for nine years if we didn’t provide a little education as well as excellent food,” he continues. “That’s why we encourage customers to look at the kitchen, see how the food is cooked. I’m very proud of being successful here.”

Irani also offers Indian cooking classes through the Knowledge Network, a popular seminar that will resume in the fail.

In the place of sugary mints, he has a bowl of fennel seeds by the door. That’s the kind of touch that characterizes Sitar. And he’s right about repeaters: I’ve been a customer for years. and Drew already is planning to take a date to the place very soon.