The Routes of Slavery

THIS IS THE MOST AUDACIOUS PROJECT that musical wizard Jordi Savall has put together – and he has come up with many a stunning program, saluting Joan of Arc, Christopher Columbus, Erasmus, music of the Balkans, and even a sweep of a century’s worth of music that defined an era of war that began four hundred years ago. In all of these multi-disc sets, published with lavish, multi-lingual books, Savall and his ensembles have sought to bridge the cultural gaps that thwart the pursuit of peace. 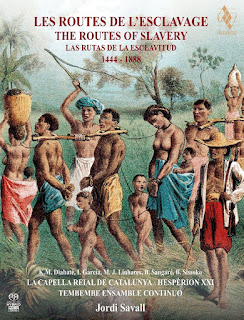 “The Routes of Slavery” is different in that it invites a more somber reflection on the centuries-old, centuries-long exploitation of African citizens. “Humanity is divided into two: Masters and Slaves” is the Aristotelian epigram, declaimed by Bakary Sangaré (known for his work with the Comédie-Française) before he begins the first in a series of recitations that remind us of the cold-blooded nature of the slave trade. To our ears, it’s an indictment; it was meant as a statement of facts, and it’s accompanied by the airy, emotionally indeterminate music of kora (a cross between harp and lute) and valiha (a cylindrical zither), from Mali and Madagascar, respectively.

What follows is a series of musical selections interspersed with more readings. The formal tones of Mateo Flecha’s “La Negrina” gives way to the high-spirited “Gugurumbé,” creating the pattern that keeps the programming so compelling.

Where some of the texts describe horrors – a passage from the “Slave Code of Barbados” is particularly abhorrent – the music almost always expresses joy. “Vida ao jongo” is a Brazilian song celebrating the drum, an important family of instruments for the oppressed. Several religious numbers reinforce the incongruous juxtapositions, balanced by the more cynical observations of some West African Griot songs. Not until the end do we hear from Martin Luther King, Jr. (“Why We Can’t Wait,” from 1963), but even then the note of hope in his speech has long been soured by political ignorance, and never more so than now.

Alongside Savall’s instrumental ensemble Hespèrion XXI and vocalists of La Capella Reial de Catalunya are Tembembe Ensamble Continuo, from Mexico and Colombia, as well as singers and instrumentalists from Mali, Madagascar, Morocco, Brazil, Argentina, and Venezuela. Alongside the two-CD set is a DVD of a performance recorded at the Fontfroide Abbey in Narbonne, France, and it’s a thrill to be able to see as well as hear this program.

Savall invited star talent to help put together and perform these works, among them Brazil’s Maria Juliana Linhares, who responded to the request for material connected with African culture by observing that the two are tightly twined, as evidenced by the Canto de Guerreiro, a high-spirited warrior’s song, and the wistful “Saí da casa” (“I Left Home”).

Kassé Mady Diabaté helped choose the music from Mali that he also performs, a striking stage presence as he improvises around Griot songs like “Manden Mandinkadenou,” noting the evanescence of youth, and “Simbo,” the saga of a boastful hunter.

There’s a generous mix of performers and performing styles in varying combinations throughout the program, but, as with any Savall project, they’re the best, and the assurance is evident. Sangaré was a particularly fine choice for the narration, given in French with a slight twist of irony in the voice.

The accompanying book provides translations both for the narrative and the numbers, but that’s only part of the written offerings. Paul Cartledge, a professor at Cambridge, looks at the Greek and Roman histories of slavery; anthropologist Gustau Nerín then takes us to the trade in Africa. Essays by José Antonio Martínez Torres and José Antonio Piqueras round out the texts.

A timeline titled “Slavery through the Ages” notes significant texts and incidents from 400 BCE to a scant few years back, quoting passages by Thomas More, Étienne de La Boétie, Rousseau, and others, alongside excerpts from the 17th-century Quaker “Germantown Protest,” opposing slavery, and the contemporaneous “Act for Suppressing Outlying Slaves” from the Virginia General Assembly. 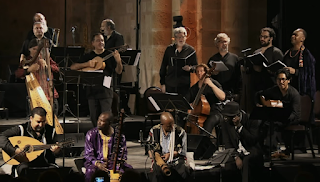 In his essay “Slavery Remembered,” Savall notes that the end of slavery saw the rise of a new form of racism, and quotes historian Christian Delacampagne: “Historically, slavery came first. Racism was merely the consequence of a civilization’s long habituation to the institution of slavery, whose victims have always been foreigners.”

All of which makes it unfortunately unsurprising that American racism should again burst from its closet and pollute the landscape; perhaps there are tools here to help us regain control of our better selves.

The indefatigable Savall is currently working on a project that brings together refugee musicians from strife-torn countries. “Orpheus XXI - Music for Life and Dignity” will be a forum for concerts and training programs, in the hope – which I share – that music remains a timeless vehicle for reconciliation.