State of the Stage Dept.: A re-look at my recent review of a stunning show that touched down at Proctors in Schenectady last November.

THE POWER OF LIVE THEATER was nowhere more evident than during a moment in “The Curious Incident of the Dog in the Night-Time,” which played at Proctors last week, when 15-year-old Christopher Boone is struck by his angry father. The audience reacted with a surprised groan; a man across the aisle from me twisted in pain. 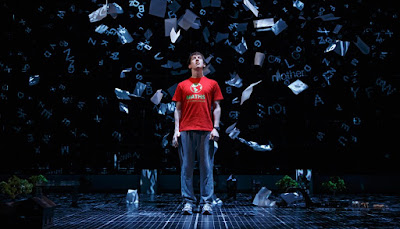 It wasn’t a particularly convincing strike, nor did it have to be: the stylized gesture conveyed all the needed anger, and Boone’s reaction, as played by the superb Adam Langdon, was so hurt that we couldn’t let go of that feeling for quite some time.

Such was our emotional investment in these characters. They moved through a rectilinear space that functioned as chalkboard and screen and light-up display – an extension of the mind of an autistic teen whose contained environment is shattered when he’s accused of killing a neighbor’s dog.

Boone is a literalist whose answers address only what a question poses and no more. In fact, as he tells us, he hates the idea of metaphor. But he’s acute enough at processing information to be a precocious wizard at math.

During the course of Simon Stephens’s stage adaptation of Mark Haddon’s successful novel, a story is told and a story is revealed. The former is Christopher’s journey to a place of unusual – for him – self-assurance; the latter is a tale of family-centered duplicity.

The young man’s story is told in two voices: his own, with frequent top-of-the-lungs intensity, and through his teacher, Siobhan (Maria Elena Ramirez), who moves from being a voice of counsel and encouragement to a voice of assurance inside his own head, as when he has to navigate the terrifying London tube system.

She also has encouraged him to write about his life, and reads to us passages from his book. It’s an effective device for conveying the subtler aspects of his character, but it’s pushed to an unnecessary extreme when the play gets self-consciously self-referential and we’re told that this play is a result of Boone’s book.

Langdon dominates the show with a bravura performance in which his hand flutter like a conductor’s, his voice rises from a purr to the screech of a feral cat, and his body explodes across the stage like a dancer’s – all of it fueled by a 15-year-old’s fears and desires, magnified by this particular 15-year-old’s unique brain.

Magnified, as it happens, onto Bunny Christie’s dynamic set. Black squares make up the walls, their interstices a light-colored grid studded with lamps that activate like synapses at key moments. A horizontal light box rings the bottom, with room enough for actors to sit upon it, and other seating – in fact, all other furniture – is provided by rectangular units carried by the ensemble from place to place like a neural transmission sequence writ large.

Christopher and his parents have evolved a system of acknowledging intimacy with the barest minimum of touching, because the boy recoils violently from any physical contact – which invests the simple act of touching hands, palm to palm and fingertips to fingertips, with a variety of emotional overtones that signify moods from joyful to heartbreaking.

Gene Gillette plays Ed, his father, with a working-class tone and manner. He is blustery and given to impulse, but Gillette’s portrayal keeps us aware that this father’s heart is very close to his surface. Although Ed is an educated man with the enlightenment to realize that life with Christopher requires extraordinary patience and emotional re-sets, he has made a series of choices that prove calamitous as the first act finishes.

Then there’s Christopher’s mother (Felicity Jones Latta), with a far more mercurial temperament, suddenly called upon to work out a fresh relationship with her son. The role demands nuance, especially in the contrast between the dream-image mother we see at first and the reality of a woman trying to recover her life in the midst of an unpleasant love relationship. Latta’s presence is dynamic even as she conveys that this character is herself a child struggling to make sense of a grown-ups’ world.

Act Two is a classical hero’s journey for Christopher, determined as he is to travel alone from Swindon to London. This means navigating train and tube, the sights and sounds and crowds of which are overwhelming to the boy. The frantic (to him) nature of the journey is brilliantly conveyed by the set, by the electronic underscoring by Adrian Sutton, and by a grey-clad ensemble that morphs from passengers to passers-by to the physical forces that buffet the boy.

If the show’s resolution is a little unsatisfying – it’s achieved with a puppy, in lieu of more difficult emotional work – the overall effect is still staggeringly terrific, and leaves us with a pathway to tolerance of those who differ from the illusion of “us” in these far-too-intolerant times.

The Curious Incident of the Dog in the Night-Time
By Simon Stephens (based on the novel by Mark Haddon)
Directed by Marianne Elliott
Proctors, Nov. 25