Of Times on the River

From the Concert Stage Dept.: The Albany Symphony Orchestra spent part of the summer on a rivergoing barge, performing works old and new at ports along the way. The concert I reviewed below was a kind of warm-up, presented in Troy, NY’s, newest performing arts center.

AS THE CLIMACTIC CONCERT in the week-long American Music Festival, last Saturday’s event was notable in presenting four new works – and two world premieres – with each composer on hand to provide insight into the music. 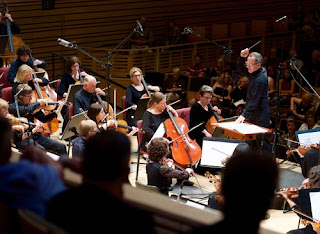 There also was a generational aspect. Composer Katherine Balch, whose “drift” premiered on the program, was recommended by an instructor of hers – Christopher Theofanidis, whose Violin Concerto closed the show.

Theofanidis’s concerto was born as a brief commission from the Principality of Monaco in 1997. At the request of violinist Sarah Chang, he enlarged the piece, first adding a second, slower movement, and then, a la Samuel Barber, giving it a high-velocity finish.

Soloist Chee-Yun was unfazed by the technical challenges, which ranged from those fast finale figurations to octaves that swept high up on the A and E strings – and with being heard over the rest of the strings when all were pitted together in the concerto’s bigger moments. She has a huge, gorgeous sound, well-suited to the romantic heart of Theofanidis’s writing.

She made her first-movement entrance with big Stravinsky chords, from which a melody pulsed into being, often dovetailed with echoes from orchestra’s strings. It’s a movement of contrasts, at times easing into a pentatonic lament, at others punctuating the soloist’s offering with harsh blasts from the brass.

If the first movement seemed easygoing but tense, the second was almost purely lyrical. It began haltingly – only on the fourth try did a the soloist’s theme get on its feet – and as that theme developed, it was passed to the orchestra to allow the violin simultaneous elaboration, reminiscent of Barber with a little Prokofiev thrown in. And the third movement wasn’t nearly as ferocious as Barber’s, giving us moments of breathing room among the perpetual-motion figures that figure so impressively on the fiddle.

Balch’s “drift” surprised and impressed me with its subtle lack of aimlessness. Intended, as the youthful composer explained, to portray the “slow, patient progress of a barge floating downstream,” it succumbed not at all to musical onomatopoeia but dwelt in the realm of the evocative. Muted trumpet alongside first-desk pizzicato, for instance, conveyed more of a feeling of passing critters than an aural portrait. And Balch layers the ensemble components in a Ligeti-like fashion, allowing a group to drop out suddenly and reveal the complex texture that had been sounding behind it, very appropriate for a waterscape.

The theme of the concert was “water music” – and it’s the theme of some concerts to come as the Albany Symphony spends the first week of July performing dockside concerts from a barge that will travel the Mohawk River – saluting the Erie Canal with other new works alongside old favorites. (Check the website – albanysymphony.com/the-tour/ – for details.)

Although Reena Esmail’s new Clarinet Concerto doesn’t have an overtly aqueous intent, it certainly shimmers like a sun-dappled jheel. She wrote it for soloist Shanker Tucker, who here gave its premiere, and drew on his talent for improvisation to expand on her own pursuit of a synthesis of Indian and western music.

That synthesis welcomed some jazzy flavors, too, again bridging the cultures, and Tucker had opportunities throughout to interact with different combinations of instruments from the orchestra as Esmail’s deft orchestration made optimal use of those colors.

The concert opened with a tree journey, and a quote from John Muir beginning, “I drifted on through the midst of this passionate music and motion,” soon describing “the varying tones of individual trees.” It’s no surprise that Justin Ralls describes himself as an outdoor enthusiast, and his “Tree Ride” offers a realization of that Muir music, its opening cacophony of strings, percussion, harp, and celeste soon joined by the brass and then the whoosh of high winds.

It wasn’t cacophonous for long. As cellos and violas sounded a legato theme, there was a hint of Respighi in those voicings, and then a huge wash of sound put me in mind of another tree description, from a poem by Vladimir Nabokov: “What tiaras of gardens! What torrents of light! / How accessible ether! How easy flight!”

After then establishing a susurrus of high strings, a note of foreboding came from the unexpected combination of harp and celeste, to which was added ominous rumblings of low brass. But our ride eventually softened back to high strings alone and the happy music of bells.

Conductor David Alan Miller takes justifiable pride in the amount of new and recent music he’s able to program with this ready-for-anything orchestra, and these are the sounds we need to listen to and assimilate to keep this kind of musical adventuring alive. What was supposed to be a practically sold-out house was dotted with way too many empty seats, the result, as was whispered by one in the know, of subscribers too frightened to risk their ears. Too bad for those ears!