From the Arts Vault Dept.: I can find online references to the Albany League of Arts up until 2002, after which it mists away. When I wrote this piece, in 1986, the organization was celebrating its 40th anniversary.

THE ALBANY LEAGUE OF ARTS was born in that first baby-boom year, 1946, and has gone through many of the same problems that faced any other newborn of that era. The struggle for identity. The need to develop social skills. Above all, the need to be recognized. So even as the city of Albany whoops it up at 300, pay attention to this 40-year-old institution. You may have been taking its services for granted for years. 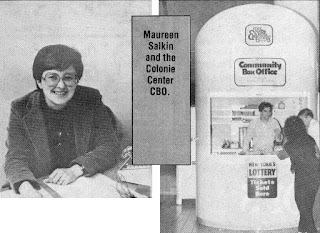 Maureen Salkin is acting director of the league, appointed in December after being a board member for several years. “We’re the second-oldest arts council in the U.S.,” she observes. “And yet people still aren’t sure what we are.

“Our most obvious service is the Community Box Office. We have four outlets, at Stuyvesant Plaza, the Empire State Mall, Proctor’s Arcade and Colonie Center. We handle tickets for local events, we’re a Ticketron outlet, and we even have tickets for State National Parks.

“The Ticketron people are always amazed at the business we do, especially at Colonie Center. The gross value of CBO is about $2 million a year.”

Well before the birth of CBO in the late 1970s, the league was serving as a clearinghouse for local artists and artistic companies to schedule events without conflicts.

“As area arts grew, so did our services,” says Salkin. “In the ‘60s and ‘70s, we became a presenting organization, using the Convention Center at the Empire State Plaza. As other organizations grew, we felt there wasn’t as much of a need for us to do that, although we still step in from time to time with such things as the recent Louise Nevelson show at the Albany Institute for History and Art.”

The League also publishes a monthly calendar, available at CBO outlets and area arts offices and the source of Metroland’s comprehensive “Where & When” listings. And there are services that benefit area artists and production companies, too.

“We stress the importance of membership in the league,” Salkin says. “This year we are launching an anniversary membership drive. There are three categories: individuals, who belong in order to support the arts and receive mailings and ticket discounts; arts organizations, for whom we distribute tickets and offer technical assistance; and area artists, who can take advantage of our referral services as well as a special rate on health insurance.

“We have over 160 organizations that belong right now. We’re a clearinghouse for them, because we maintain a two-year rolling calendar that lists several hundred events a month. We provide assistance in public relations, fund-raising, grant writing and management. We have many publications that can help in PR, bookings and the like. We have an arts media directory, a ‘Places & Spaces’ guide to area halls, and many books in our library on everything from administration to legal matters. Really, our services are almost never-ending.”

No mid-life crisis seems to infect the league at 40. Salkin speaks with excitement about plans for the future: “Our goal is to improve the services. We are always striving to refine and improve.

“We plan to continue to sponsor special events. We have an Albany League of Arts Scholarship that is administered by the Juilliard School. We are the administering agency for the New York State Council for the Arts Decentralization Plan. Funds granted by that organization are regranted among the four counties locally by us.

“We are planning to launch a speaker’s bureau and some new workshops for artists and arts organizations later this year. But most important, I think, is to make people aware of who we are and what we do. I am always suprised at how little people know of us, but then we haven’t spent much time blowing our own horn. To so many, CBO is just a way of life, but we need a strong membership base for a service like that to continue.

“The arts is a $4 million business in the Capital Region – twice that if you use other multipliers we chose not to. If you ranked it with major employers in the area, the arts would be one of the top 25.”

Interested in a membership or more info? Write to the Albany League of Arts, 19 Clinton Ave., Albany, NY 12207, or call the league at 449-xxxx. Membership is a birthday gift the league can really use.