From the Vault Dept.: Let’s drive into the past and through the interesting geography of the country alongside Tom Rawls, whom I interviewed in 1990 on the occasion of his book Small Places, reviewed below.

“EVERY PERSON HAS A STORY,” says Tom Rawls. “When I was helping start Harrowsmith Magazine, I suggested a series on small towns and the people in them. The idea was to find the distinctive in what at first glance may seem common.” 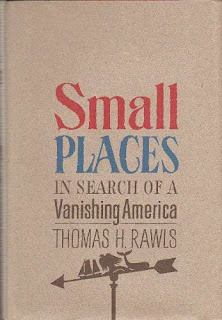 Rawls wrote the column, 15 selections of which are collected in a book titled Small Places (see accompanying review). His travels take him practically from coast to coast and north into Alaska's wilds. How did he choose the places he wrote about?

“It was a pretty unscientific mix,” he confesses with a laugh. “My intention was serendipity. Most of the places had some feature that caught my eye, or there was some outgrowth of the community that made it striking. In Nye, Montana, for instance, here was the country’s only platinum mine, so it was an opportunity to study the natural tension you get between cattlemen and miners.”

Rawls, who was born and raised in Philadelphia, came to writing by way of the editor’s desk. “I took up the pen five years ago, when I was 39,” he says. “Before I came to Harrowsmith I was an editor at Blair Ketcham’s Country Journal for six years. That was sold to a corporate entity and things changed. I guess we all have to make our Faustian bargains, but I left to come here.”

Here is Charlotte, Vermont, a town alongside Lake Champlain just south of Burlington. Thanks to another change in ownership and philosophy, the magazine is now called Harrowsmith Country Life, a glossy bi-monthly with features on rural survival, both practical and luxurious. A recent issue features stories on decorative garden bulbs, add-on greenhouses and the use and design of the “come-along.”

At the heart of the magazine is a sense of the integrity of the individual; it’s hardly coincidence that you’ll find the same focus in Rawls’s book.

“I think throughout it you’ll get a message of the dangers of centralization, of bigness,” says Rawls. “Diversity is a human strength. One piece I never did – I never went into a small town where the Wal-Mart went up. Sam Walton is one of the richest men in the country thanks to that chain, but it was done at the expense of the local business community.”

Some of the stories he found were pretty self-explanatory. “I went to Lynchburg, Tennessee, and Jack Daniels was the story. In Antelope, Oregon, it was Bhagwan Shree Rajneesh. But in a town like Osceola, Missouri, it took a while to discover what was going on.”

The Osceola story describes a town that thought a dam project of a decade ago would bring water recreation and subsequent tourism – which instead turned out to be flood control for the rich folks upstream at Lake of the Ozarks. “People there have a difficult time accepting the hand of cards they’ve been dealt. They’re still saying, ‘If only the Corps of Engineers would raise the level of the dam ...’”

Osceola also was one of the sources of feedback to Rawls’ column. “A fellow called me at the magazine and told me he thought it was a good piece. He just wanted me to know that I’d mis-identified a certain man.”

Not all reactions have been that easygoing. “The local paper in Dott, Pennsylvania was very upset at the way the town was portrayed. I have a line in the book describing how poor the county is: ‘When I returned home to Vermont and found my car sandwiched between a Saab Turbo and a Volvo in the airport parking lot, I realized I had not seen a pricey foreign car for a week ...’ They felt very defensive about that, even though it wasn’t meant as a put down.

“On the other hand, I was called on a line I thought was clever, where I described that the arrival of an L.L. Bean catalogue was like a visit by a missionary in a foreign land. I took that out of the book because I realized there really was no need to have sport at someone else’s expense.”

Rawls’ column ran for three years, after which he took a breather. Now he’s exploring the idea of writing a column he calls “Ordinary People,” which would comprise “shorter pieces, centered around a single individual.” As for another book, he says, “a part of me would like to do that, but part of me likes what I’m doing here at the magazine. And I’m not sure I can do both.”

THE SMALL VOLUME is subtitled “In Search of a Vanishing America,” and takes us through 15 small communities in the U.S.

While Rawls takes note of the geographical features of each of his destinations, he quickly zeroes in on what makes each area interesting: the people.

Each portrait carries a twofold story. Through each series of interviews we get a feeling of the personality of the community. And each place also has some kind of armor or adversary that also is portrayed.

In Mount Hope, Ohio, we spend a few days among the Amish (whose names are changed in deference to the Amish resistance of vanity). It’s a fascinating look inside family units that otherwise are inaccessible to the rest of us, and we come away with a much clearer understanding of the unusual-seeming way of life these families follow.

Here’s a sample: “Much about Amish life and beliefs is revealed in the Amish’s limited use of tractors. Amish will use tractor-powered belts to run various attachments ... The Amish use horses for all their field work, though. There is one simple reason for the continuation of that practice, as Eli explains: ‘With horses, you’re limited.’

“He adds: ‘With a tractor, they have lights. You can plow day and night – if you’re crazy enough to do it.’”

Some of the little towns are facing off a foe. In Antelope, Oregon, a cult of Rajneeshees followed their leader, Bhagwan, into the community to start up a freely-spending, free-love commune. Bhagwan was deported and his puzzled followers are now faced with going from commune to community.

The piece contrasts the Rajneeshees with Oregon farmers like Derald McCall, foreman of a local ranch, and that contrast is more compelling than any authorial judgment calls would have been.

“Hard-Rock Miners and the Cowboy Blues” portrays the life and tension in a Montana town faced with a newly-opened platinum mine. Sure, new jobs await the residents, but there’s a resistance to change made understandable in the essay.

Journalistic restraint is a characteristic of this book. Rawls lets the people speak for themselves and orders those comments in a series of benevolent settings. Thus he is able to start the book with three pieces about religion and a small town without proselytizing or getting into thorny theological territory.

We also meet such passionate folk as Michael Pilarski, known as Skeeter, a modern-day Johnny Appleseed in Chelan, Washington; Steve Parker, a forester in North Danville, Vermont, and a handful of the residents of Point Reyes Station, a northern California lighthouse and wildlife preserve.

If Rawls seems to spend more time in the saloons and on ranches, it’s because those are the prominent features of the communities he explored.

The closing piece, “Suburban Fever,” looks at a town in New Jersey faced with a growing influx of city people. It’s a scary and fitting closing, because an urban sensibility has always been at the heart of what we’ve been trained to think of as progress and the rural community that resists such change is seen as unprogressive – backwards, even. People who don’t make their living off the land or from the community are a threat who provoke what amounts to a class struggle.

“Take driveways,” writes Rawls, “not your standard measure of status, but a revealing one in small places in transition. There are no official statistics under this heading, but my own informal survey of Sussex county residents reveals that newcomers are four times more likely to pave than long-time residents, who are content with natural, utilitarian gravel.

Small Places is a gentle, elegantly-written book that will teach city people the truth about the seeming weirdness of country folk even as it reinforces the gloomy prospect of the evanescence of country life. It will cause you to take a second look at those little towns that whisk so quickly by, not to mention a second look at the driveways.