Platonic Relations Dept.: A recent review of an enjoyable mix of music and theater given at RPI’s EMPAC, where such innovations regularly await.

KATE SOPER’S STARTLING, ENTHRALLING “Ipsa Dixit” begins, almost self-deprecatingly, with the question, “What is art?” Academics wrestle with the concept, but I’ve never known a true artist to feel any need to answer it. And therein lies the delightful dichotomy of Soper’s work: it pursues the question with the words of others, but words that are themselves turned into the art of which they speak. 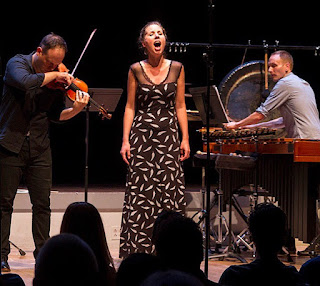 Soper and members of the ensemble Wet Ink presented the piece in the theater at Troy’s EMPAC last Friday evening, in a black-box setting that facilitated the work’s multimedia aspect.

Three doorway-sized scrims hung in front of a projection screen; behind the centermost scrim was a platform. The show’s title was projected onto the screen, with the “X” landing on the platform’s scrim.

As the performers entered – flutist Erin Lesser and violinist Josh Modney stage right, percussionist Ian Antonio with marimba and drum battery at left, Soper mounted the platform and stood ready. Then time stopped for the next ninety minutes.

Soper left the platform with a look of distress, regarded the audience, and asked the abovementioned question. The rest of the performance collected lyrical explanations, more questions, and a quilt of percussive musical textures and turned them every which way. There was no answer in any traditional sense: the point of it all is to be jolted into new avenues of exploration in which the exploration itself is the answer.

Soper hits us at the outset with a lengthy text by Aristotle that defines art as imitation, “and the different arts may differ in the medium of imitation.” But whatever might differentiate one category of art from another is blurred here. The violin sounds like sandpaper, the flute mutter throaty protests, and Soper interrupts the action with the sound of the small bell she’s wielding – but the bell has no clapper, and it’s Antonio providing its sound. All this while a background projection of a flowering field grows literally blurred.

The instrumentalists add their voices to the recitations of text; Soper sometimes sings (beautifully, when she wants to) and sometimes stutters and sometimes seem to speak in tongues.

“Poetics,” the opening piece, goes on to define tragedy and suggest that tragic emotions (we’re still with Aristotle here) are “best produced through anagnorsis” (a change of direction) “and perepeteia” (going from blindness to sight), which techniques informed the sections to follow, assuming you’d let enough of your concert-going defenses down to appreciate your state of relative blindness upon entering the event.

“Only the Words Themselves Mean What They Say,” performed with Lesser, switching to bass flute, set compelling texts by Lydia Davis. The first of them, “Go Away,” looks at the dynamic of a lovers’ quarrel, and the intricate parsing of the texts echoed the time-stands-still aspect of an emotionally fraught fight. Occasionally, Soper underscores the text with an overly literal sound array, giving angry sounds for anger, for example, where a contrasting soundscape might be more provocative, but she’s also inclined to shock you with contrast, as in “Getting to Know Your Body,” a section within this section, where the text erupts into nonsense syllables that begin, in the context, to make sense. On the whole, “Only the Words” showed how the effectiveness of her Soper’s techniques. 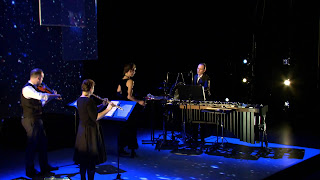 The projection changed to a surfside scene for “Rhetoric,” returning us to an Aristotle text that champions the art of persuasion. The line “I have seen firsthand the great advantage bestowed by rhetoric on all those who seek to move through speech” gathered the performers around the marimba for a heightened intensity of that instrument’s sound, a nice combination of its strident voice and the text’s despair over the public’s ability to reason. And when we reached the notion “that rhetoric may be used for evil,” Lesser and Modney returned to their flute and violin as if acknowledging the all-too-prophetic nature of that thought.

The centerpiece of the evening is “The Crito,” a Platonic dialogue between Socrates and Crito performed by Soper with a Antonio providing a variety of percussion effects. (Antonio, by the way, grew up in Albany and performed with the Empire State Youth Orchestra while studying with Richard Albagli). Plato is looking at government through social contract, which was more or less true of this country’s government up until a month ago. So, while it’s difficult to judge the work outside of the press of current events, I suspect the artists wouldn’t mind.

“Metaphysics” again returned us to Aristotle and the full ensemble, and the concluding section, “Cipher,” set a variety of texts, including a segment from Freud’s “The Interpretation of Dreams” and selections from Hoosick Falls-based Jenny Holzer, herself an artist who resists boundaries. A here’s-more-of-the-same feeling began to inform my sense of the evening at this point as a starfield took over the projection and we drifted into a darkness that seemed to remove us from the performers.

While I applaud Brad Peterson’s projection design – something that was added as part of Wet Ink’s EMPAC residency period – it seemed to become too much of its own entity, a contrast to the fully integrated nature of the rest of the performance.

Language is, after all, the key to “Ipsa Dixit,” which turns from word processor to food processor, mixing those sounds into what seems unrecognizable until it’s cooked back together in this highly inventive stew.