From the Vault Dept.: Although I thought John Doyle’s concept of “Company” was fairly successful, I’ve yet to be won over to the play-your-own-instruments approach to musicals that weren’t developed with that in mind. It was a particular problem with “Sweeney Todd,” which has a score that begs for as full an orchestra as can be had. Below is my report on a touring production that hit town a few years ago.

THE STORY OF SWEENEY TODD progressed, over the centuries, from urban legend to penny-dreadful to children’s bogeyman to Grand Guignol melodrama, until a backstory-rich stage version from 1973 inspired Stephen Sondheim’s acclaimed, effective musical. 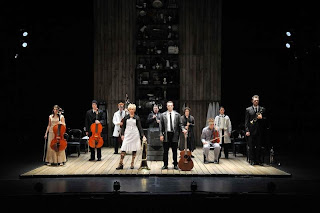 That version, too, has traveled a circuitous route since its 1979 Broadway debut, soon thereafter appearing at opera houses and community theater halls, in semi-staged productions with classical orchestras, as a Tim Burton film shorn of its ensemble numbers and, most imaginatively, in John Doyle’s 2004 staging (brought to Broadway a year later) in which ten actors play all of the characters and also provide the entirety of the musical accompaniment.

This is what played last weekend at Proctor’s Theater, as diverting a Good Friday entertainment as I’ve ever experienced. But it’s a production I admire more than I enjoy, and for a number of reasons.

Harold Prince’s original staging filled the huge Uris (now Gershwin) Theater with moving catwalks and stairways, placing most of the action on a revolving cube. The show seemed swamped by its environment, and benefits greatly from the Brechtian approach Doyle devised.

But, at heart, its an operatic piece. It contains some of Sondheim’s most gorgeous melodies, and two ensemble pieces – the quartet “Kiss Me” and the trio “Johanna,” sung while Todd is dispatching tonsorial customers down a chute – are among his best work. If ever a piece thrived on the colors of its accompanying orchestra, this is it, and expecting as convincing an effect from ten intermittent players is like expecting “Turandot” to work with a wind quintet.

Doyle took a similar approach with “Company,” another Sondheim show, and it worked brilliantly – but “Company” already is an ensemble piece that explores emotional depths, and the use of actor-instrumentalists added another layer of irony to an irony-laden show.

“Sweeney Todd” remains a melodrama, its principals – Todd himself (Merritt David Janes) and his cannibalistic compatriot, Mrs. Lovett (Carrie Cimma) – cartoon characters drawn on an outsized canvas. Todd’s obsessive desire is revenge, with his razors his only friends (and so celebrated in a charming, creepy number). Clad in the contemporary anonymity of white shirt and necktie, Janes honored his character’s musical requirements well, providing guitar accompaniment during his few offstage moments.

Cimma, honoring her Broadway antecedent, Patti LuPone, brought a tuba onstage from time to time for a cheap laugh. Her neo-Goth hair and garb suited Mrs. Lovett’s maniacal nature, even if her English accent offered some perplexing vowels. She was at her best in music-hall numbers like “By the Sea” and the always-effective “A Little Priest.”

Other characters are even more two-dimensional. Anthony, the hero-sailor (Duke Anderson) and Johanna, Sweeney’s long-lost daughter (Wendy Muir) are the obligatory ingenues, and the actors played them – and played cellos – with suitable intensity. More memorable were Ruthie Ann Miles in a short turn as Pirelli (Todd’s first victim) and Chris Marchant as the amusingly bughouse Tobias, whose song “Not While I’m Around” was suitably poignant.

Although this production recreates Doyle’s Broadway version, it lacked the caliber of performance you expect from a Broadway show. Experienced actors bring an inspiring sense of conviction to their roles, and, although this version certainly showed a high level of accomplishment, there were enough rough edges in movement and characterization to suggest a need for more of that conviction.

One guarantee that you’re getting a truly professional tour is the use of Equity actors, but this is one of many traveling productions that refused to sign with Equity and therefore don’t have access to that level of skill. That saves money for the producers, but it’s a savings that doesn’t typically trickle down into ticket prices. Theater can be a cut-throat business, so let the buyer beware.