RINALDO ALESSANDRINI HAS BEEN IMMERSED in the music of Monteverdi for over twenty years, both as a scholar, editing and assembling idiomatic performance editions of his work, and as founding director of Concerto Italiano, the early-music ensemble with which he has recorded much of Monteverdi’s work (in addition to much by Vivaldi, including the best of the umpteen million “Four Seasons” versions, and one of the better Bach Brandenburgs sets). 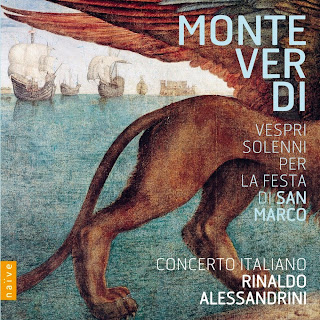 Their latest recording, of Monteverdi’s “Vespri Solenni per la Festa di San Marco,” gives us a work that doesn’t exist, recreating the soundscape of St. Mark’s Basilica in Venice by using Mantua’s Church of Santa Barbara – ironically reversing Monteverdi’s own career path, which took him from Mantua to Venice, where he revitalized the music at St. Mark’s.

As Alessandrini convincingly argues, the acoustic of the hall in which Monteverdi’s works were performed was itself an instrument in the ensemble, able to “invest the music ... with that essential and indispensable timbral component which the analytical acoustics of our modern concert halls can never replace.” You’ll hear the two-second decay in the recording, but it’s a phenomenon that informs all of the many antiphonal moments. The textures of voice and instrument blend and build with an uncanny sense of emotion, heightening the drama that was one of Monteverdi’s innovations as he moved music into the Baroque era.

The work itself was put together from a variety of Monteverdi’s sacred works to approximate what a Solemn Vespers service might have been like during one of the important holidays. Thus, the music begins with a Responsorium from Monteverdi’s Vesper Psalms of 1610, and includes selections from his motets and instrumental works. There’s also a canzon by Gabrieli, who was organist and composer at St. Mark’s long before Monteverdi got there.

And it finishes with the Magnificat for Eight Voices from Monteverdi’s collection titled “Selva morale e spirituale,” from his St. Mark’s tenure, in a version completed by Alessandrini, a beautiful 15-minute finish to the cycle.

The instruments on this recording are of 17th-century style, with violins, viola da gamba, violone (predecessor of the bass), archlute, theorbo, cornets, trombones, and organ, achieving a gorgeous balance and blend. The vocal ensemble – two apiece of soprano, alto, tenor, and bass – sometimes sound a bit straitened in their solos by the demands of period singing, with no vibrato and challenging ornamentation – but they, too, blend well in the ensemble moments.

And you can see it on the accompanying DVD, a 50-minute documentary of the process that includes a tour of the recording site, rehearsal footage, and a complete performance of the Magnificat. (It wasn’t very warm in those chambers!)

There’s a wonderful side-trip as Alessandrini and friends enjoy a meal prepared by Francesco Antinucci, director of research at Rome’s Institute of Cognitive Sciences and Technologies, drawing from recipes published in the 16th century by Bartolomeo Scappi, which featured a liberal mix of sweet and savory items in the same dish. Alongside several courses and a generous amount of wine, a fascinating discussion of Monteverdi’s influence ensues. The documentary is a splendid and essential companion to the recording.