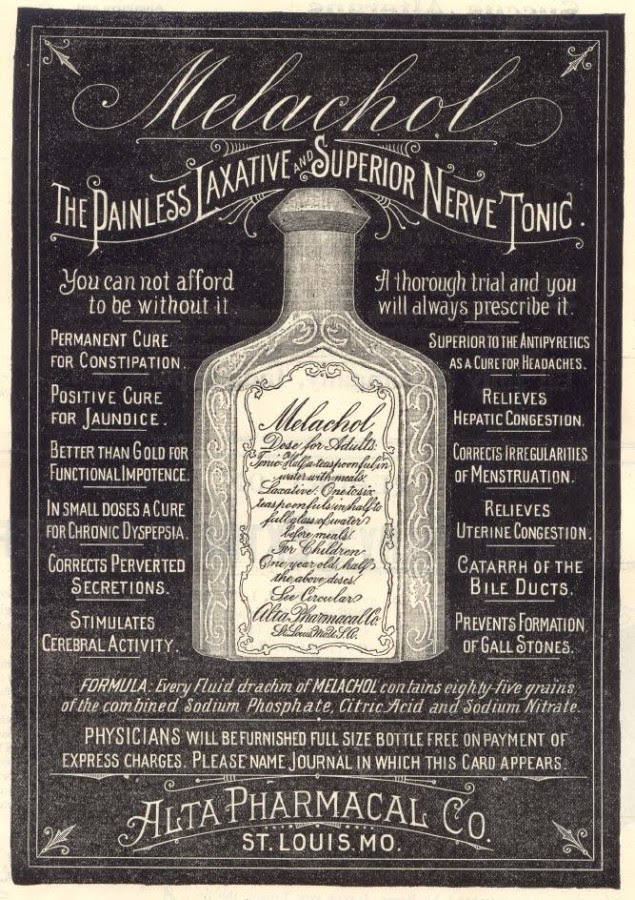 I don't know where this ad appeared, but we know the stuff must be good: it also has a full-page ad in the June 1895 "National Board of Health Magazine: A Review of Sanitary and Therapeutic Science" (Vol. IX No. 6). That one is an ad designed to resemble the neighboring editorial content (not that said content doesn't get similarly sensationalist). Here's the ad copy (and dig those diseases!):

The preparation Melachol is known to the public as a painless laxative and superior nerve tonic; to the surgeon, physician, general practitioner and specialist, it is known as a certain stimulator of the entire glandular apparatus of the human system.

Scofulous Ophthalmia, lcthyosis, Chloasma, Jaundice, Hepatic Congestion, Gall-stones, Chills and Fever, Incipient Cirrhosis, Haemorrhoidal Congestion or Haemmorrhoids, all forms of tertiary Syphillis affecting either skin or nerves, in truth, any disease of the epithelial cell, even to cancer itself, is as magically controlled by Melachol as pains are subdued by Morphine.

It may be taken, without fear, in any dose from ten drops to ten drachms, ony observing that enough water be taken with it to make it palatable. No single remedy has been as successful in relieving the headache and general distress that follows a night of dissipation. Gold, celery, damiana, phosphorus, and a number of other remedies have been recommended as efficient in restoring lost vigor; among these, phosphorous in assimilable forms, undoubtedly stands at the head.

Melachol contains phosphorus in a combination which makes it readily acceptable, and to this it probably owes its remarkable power.

Being devoid of toxic properties, it may be safely recommended as a household remedy, and because of its non-irritant qualities, it is the safest remedy for domestic practice; fecal impaction, typhlitis, and even appendicitis, has been cured by the prompt use of Melachol.

Several cases of uterine inflammation and enlargement, in which curetting had utterly failed to improve the conditions, have been restored to perfectly normal health by a systematic use of Melachol. It is well known that opium and liquor habits depend upon a weakened condition of the nerves, and that a restoration of nerve vigor, while it may not destroy the pleasure of indulgence in stimulation, nevertheless completely annihilates the craving for it. It is on this account that Melachol has been so successful as a cure.

It is unlike some other remedies, for it takes people out of the mad-house, instead of putting them there, by causing a perversion of nervous and physiological functions.

And here's a page of testimonials -- from MDs, yet! -- drawn from the January 1898 "St. Louis Clinique: A Monthly Journal of Clinical Medicine and Surgery." Needless to say, I can't wait to get my hands on some of this. 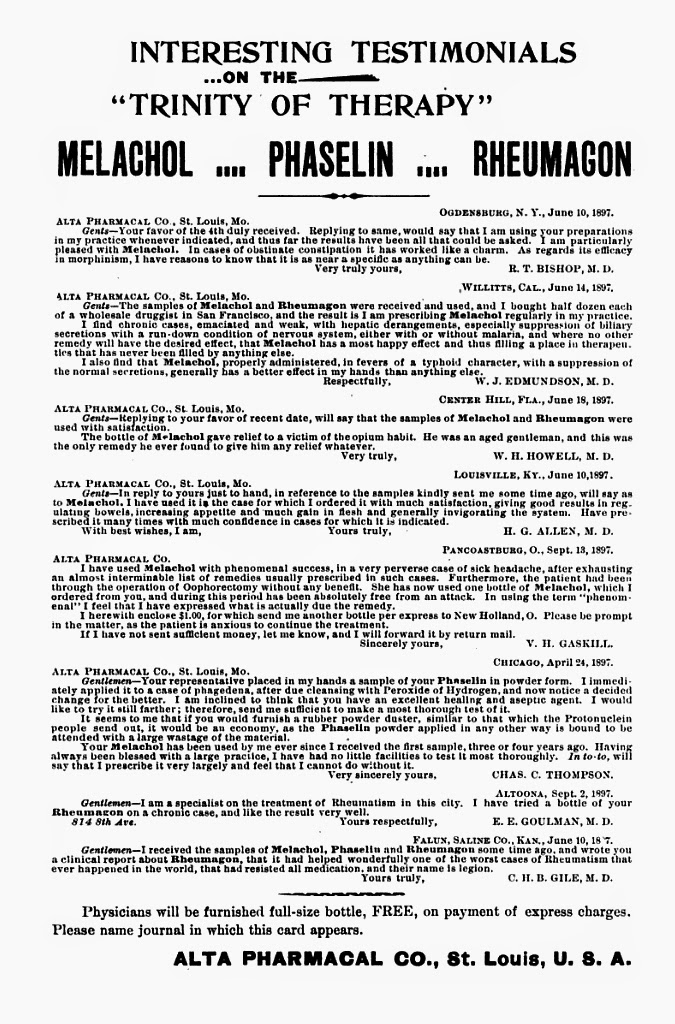