I've Got a Secret

NEARLY THIRTY YEARS AGO, I got involved with computers to an unhealthy degree, fueled by curiosity and the sizeable fees I soon was paid by computer magazines for coherent articles. I got my first machine – an IBM-style PC – in 1985, when the screens were a single color and a ten-megabyte hard drive was a costly luxury. And, in those pre-Windows days, the computer was mutely enigmatic. It greeted you, once it was activated, with an unhelpful prompt: A> 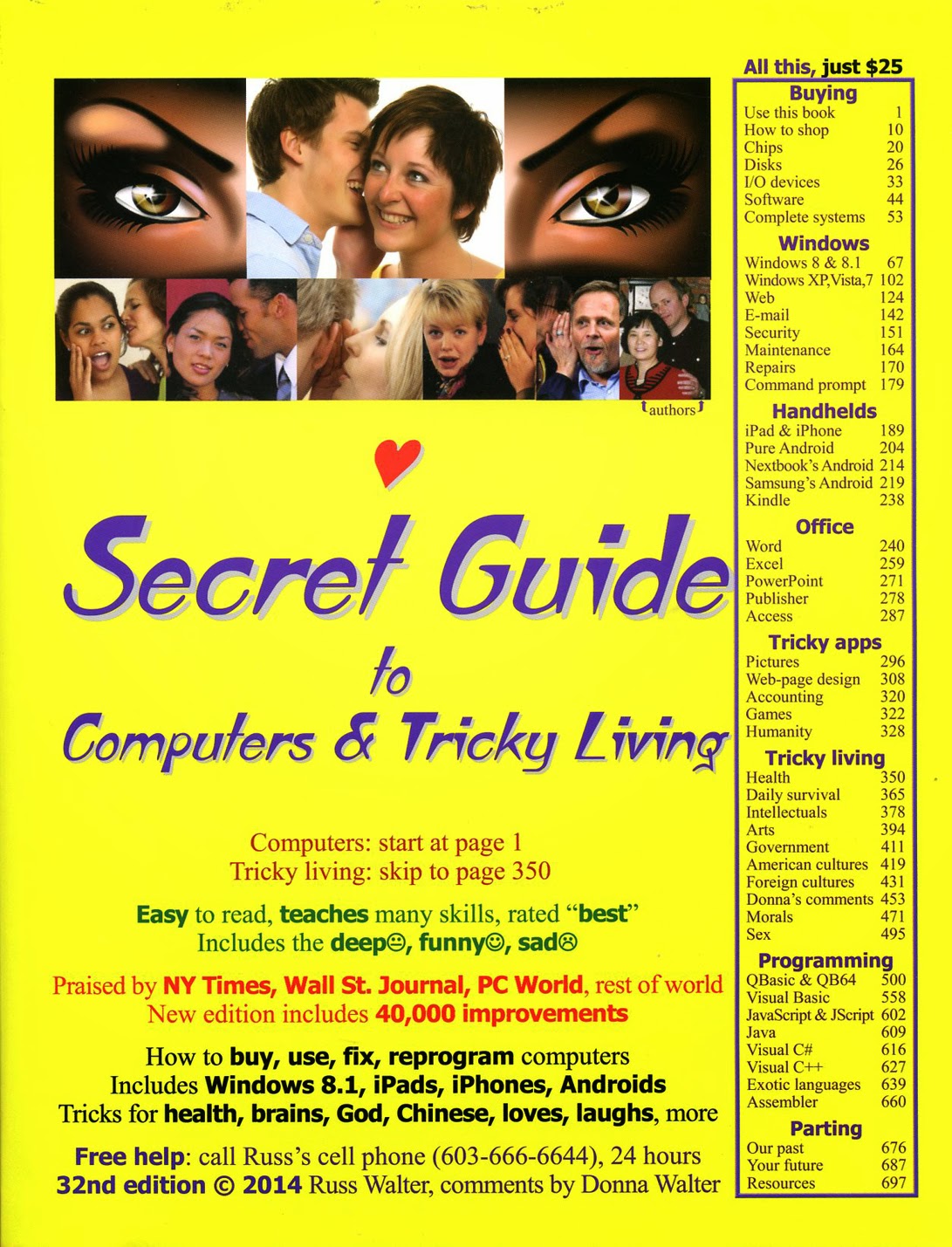 You were expected to type a command to tell it what to do. As a typewriter virtuoso, I was surprised by and angry at this demand. I needed to get some writing done. I’d been promised that this would show me an easier way. I was about to throw the damned thing out the window when my wife suggested I submit to some training.

I acquired a number of books, most of which assumed that I knew far too much of the subject I sought to learn. One that didn’t – one that taught me what needed to know, thus preserving my sanity, was The Secret Guide to Computers, self-published by a (then) Massachusetts-based eccentric named Russ Walter. Unlike most of the other computer-guide writers, Walter seemed to know what challenges you faced each step of the way and in a clear, non-patronizing tone, eased you through them. He also offered 24-hours-a-day phone support for the price of the call. He was known to don a wizard’s costume for speaking engagements and appearances at computer shows. And he updated the book regularly enough to accommodate the rapid technology changes that characterize the industry.

At some point I decided that I knew enough about the subjects he covered that I no longer needed to keep up with his revisions, so it’s with a mixture of surprise and humility that I report that he’s still at it, and his 32nd edition goes far beyond the scope of what he covered in the past.

It’s a 700-page tome. Of the 500 pages devoted to computers, 200 of them are guides to programming languages and a brief trip through the technology’s history. Leaving 300 dense pages advising you how to buy a machine, deal with its version of Windows (if it’s PC-compatible), run the most popular software programs, and gain some facility with graphics, games, money management, and more.

You can easily find sample chapters – and complete e-copies of earlier editions – on the internet. Which will give you a taste of Walter’s clear, to-the-point prose, as in this example from the current edition:


You might receive an e-mail saying that the security department (of your bank, credit-card company, or employer) wants you to reenter your personal information (credit-card number, PIN number, social-security number, mother’s maiden name, etc.) to protect against fraud. At the bottom of the e-mail is a button to click to go to the Web site, where you enter your info.

But that Web site is a fake: it’s really run by a crook who’s waiting for you to enter your personal info so he can steal your identity and credit-card info and buy things billed to you ...

He also laces his prose with whimsy, leaving nuggets of fun to be mined as you go through the pages:


To create art, write a weird program whose consequences you don’t fully understand, tell the computer to obey it, and look at the computer’s drawing. If the drawing looks nice, keep it and call it “art” – even if the drawing wasn’t what you expected. Maybe it resulted from an error, but so what? Anything interesting is art.

But you’ll want to buy the book to have it on hand for leisurely reading. Which brings us to the 200 non-computer-related pages, the new-to-me section titled “Tricky Living.” If I haven’t spent as much time as I might have combing the rest of the book, it’s because this part is too compelling to easily put aside.

Beginning with a well-informed, well-reasoned guide to health, you’re escorted through Walter’s very well-reasoned approach to life. It has the best precis on nutrients I’ve ever seen. A section titled “Daily Survival” goes from house to lawn, from transportation to finances, to an insightful section on “Careers” that even brings crime into view.

And if the advice on mowing your lawn seems a bit fanatical, flip to “Donna’s Comments,” wherein Russ’s wife offers her point of view (and confesses that she often mows the lawn in secret). As a Chinese-American, she gives a uniquely multi-cultural perspective.

There’s even advice about visiting China, which I passed along to my daughter, who will be making just such a trip next spring.

As good as your trusty old Strunk & White may be, take a look at Walter’s guide to writing, which, amidst its excellent suggestions, contains many more puns than any other such guide I’ve seen.

But let me close with another quote, this from his section about cooking. I couldn’t have put it better:


If you make a mistake in the kitchen, pretend you made it on purpose.

If you burn the food, so it’s started to turn black, brag that it’s “char grilled.” If it’s very black, call it “blackened,” as the Cajuns do. If the vegetables at the bottom of a pot are just starting to burn, so they’re turning brown and sticking to the bottom, call them “caramelized,” as fancy restaurants do.

Secret Guide to Computers & Tricky Living
by Russ Walter, with comments by Donna Walter.
$25; ordering information is at SecretFun.com.