IN CELEBRATION OF my daughter’s first visit to England – she’s there as I write this, newly arrived, enjoying the fruit of an exchange between her school, Troy’s Emma Willard, and the Red Maids School in Bristol – I’ve got a couple of reminiscences on tap of my own high-school-aged travels.

I wrote about my brush with Alec Guinness in this post, one of the highlights of my first trip to London, which took place in February 1972, when I was 15. My high school offered a weeklong theater tour that would put us in West End seats, I talked my parents into paying for the trip (it cost about $300 all in all), and our group of students and chaperones caravanned from Ridgefield, Connecticut, down to JFK in time to wait six hours as our flight was again and again delayed. 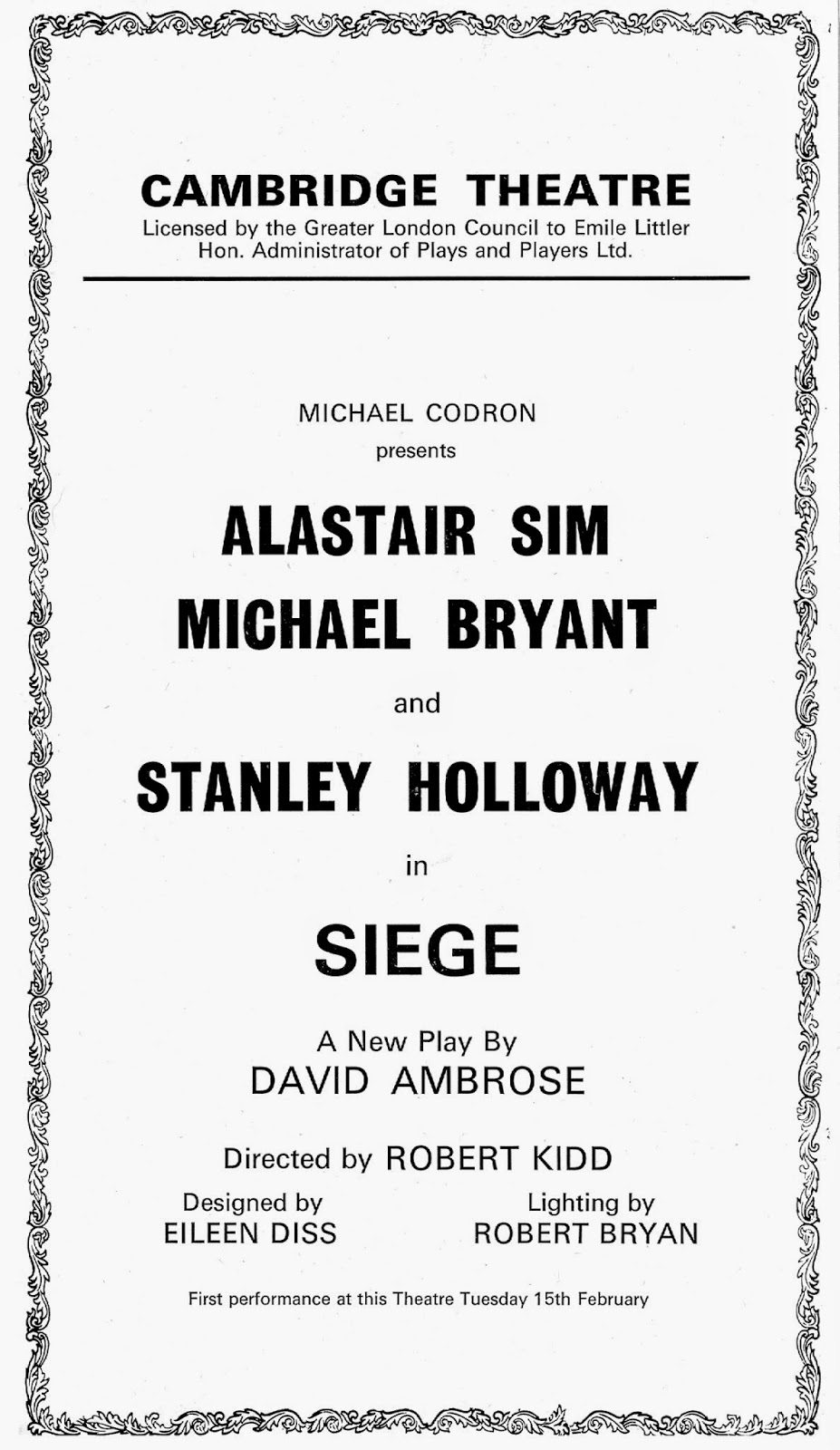 No matter. It was my first trans-Atlantic trip, placing me in the city I’d most wanted to see. British film comedies and the BBC radio series “The Goon Show” infected me with Anglophilia: how exciting to be surrounded by people for whom the Mother Tongue truly was part of the family. I would find the precision of the prose of P.G. Wodehouse spoken in the mellifluous tones of Laurence Olivier.

We landed at Heathrow. I couldn’t understand a damn thing any of the natives was saying. There’s a close-to-London way of speaking that took me a day or so to get used to, and the more used to it I grew, the more self-conscious I felt about my own nasal drawl. (Back in the 1950s, the Goons – Peter Sellers, Harry Secombe, and Spike Milligan – dubbed Americans “Herns,” because the sound of American speech could be summed in that single syllable.)

The group was installed in a London hotel and the sightseeing began. Not surprisingly, there was a huge interest in shopping that I didn’t share, and being the knee-jerk contrarian I’m afraid I remain, I feigned no interest in taking in Westminster Abbey, the Tower of London, and other must-see sights.

I was after something I could define no better than “the London experience,” which I believed I’d find by an aimless solo trek through streets and subway. I delighted in the Underground, a subway system that has New York City’s busy-ness but with a surprising helping of charm (or at least it did then). Escalators down to the Underground platforms were flanked by advertising posters on the walls, and I recall being reminded to see a show titled “Behind the Fridge,” starring Peter Cook and Dudley Moore, which I later would learn was a spinoff from their debut hit, “Beyond the Fringe” – and which I’d soon enough see in New York after it had been re-worked into “Good Evening.” But in 1972, I was barely conscious of the duo.

I took no photographs while traveling. I bought a pile of postcards from the Ridgefield News Store before I left, cards showing pleasant scenes of Ridgefield, and mailed those from London to my Ridgefield friends.

One of those Ridgefield friends, John Hallenborg, had already graduated and had planned some European travel to coincide with our trip, so he arranged to stay in London the week we were there, and put up at the same hotel. This was not the most welcome news to our teacher-chaperones, who knew John as a brilliant scoundrel. He still has the deftest brain of anyone I know, and he gave up drinking – which was his principal high-school recreation – long enough ago to save his liver and re-enter his life.

John and I roamed the streets, rode the buses, and sometimes even spent afternoons merely sitting in our hotel’s large, fusty parlor, where dust-flecked shafts of sunlight struggled through the interstices of the Venetian blinds that obscured the room’s tall windows, and where an elderly waiter in swallowtail coat would take our orders for comestibles. I sipped hot chocolate, which I decided was about as elegant as life could get, sneaking in the occasional serving of sherry, for which I was developing a taste I have yet to lose.

It was on one of those occasions that we experienced what we later decided was a quintessentially British experience. With a busy roundabout beside the hotel, the sound of traffic was a constant, and one afternoon the blare of horns and revving was topped by a screech of brakes, a cry of pain, and much shouting and honking.

Not a soul stirred in the seats around us except for two smallish children who hurried to the window and finger-widened a crack between two slats. “Oooh, look, Daddy!” said one of them, in measured tones. “That man’s got hit by a car!” And still nobody stirred, and so neither did we, although every particle of me wanted to see how bloody this encounter might be.

As I explained in the Alec Guinness piece, I quickly learned that the shows chosen for us to see had the potential to be crap. Certainly the first one, which I saw on Feb. 21, 1972, a musical version (but worse, a 1970s musical version) of “The Canterbury Tales” was crap. The next night it was “Never the Twain,” at the Mermaid, weaving works by Brecht and Kipling, was far more interesting (not least in the way it alienated much of the not-ready-for-that-highbrow-stuff audience), but I now understood that there was better fare at hand if I paid for the tickets myself.

So the next night it was “A Voyage Round My Father” with Alec Guinness. Why I chose Robert L. Sherwood’s “Reunion in Vienna” for the following night escapes me. I knew its star, Margaret Leighton, from the movies “The Loved One” and “Waltz of the Toreadors,” but would that have been enough?

Alastair Sim created the definitive Scrooge in the 1951 film of that title, so I was eager to see him in “Siege,” which had the bonus of Stanley Holloway. And Robert Morley was wholly miscast but nevertheless hilarious in Alan Ayckborn’s gimmicky “How the Other Half Loves,” which completed my show-going that trip.

But if the teachers who were with us worried about John’s bad influence one me, there were a couple in the entourage who weren’t exactly blameless themselves. “A Clockwork Orange” had recently opened , and was playing in a London movie house. (Soon enough, after incidents of copycat violence in the city, director Stanley Kubrick insisted that movie no longer be screened in that city while was alive.)

In its initial release, the movie got an “X” rating, forbidding those under 18 from seeing it. At 15, I easily could pass for 20, and so I was unchallenged when I joined a trio of our escorts to see the film. It was revelatory. Never mind my time spent hanging out with John – I blame that movie for my own descent into hooliganism.
Posted by B. A. Nilsson at 10:56 PM

Byron, you are a bit confused. Our flight to London in 1972 was delayed but by us. Our BUS was caught in a snow storm the flight was held for our group of 40+ about 40 mins. Ask Jim E. Who was with us and is in my FB group. HE was seated with an angry passenger who glared at him for 6 hrs. A week I will always remember! Fred

Could I have gotten to JFK some other way, I wonder? I remember studying the inside of that airport for an excessive number of hours!