Guest Blogger Dept.: Before he became one of Hollywood’s most-renowned and highest-paid screenwriters, Ben Hecht slogged at an Underwood in the offices of the Chicago daily papers, an experience enshrined in his play “The Front Page.” Here’s one of his newspaper stories.

THEY WERE HUNTING HIM. Squads of coppers with rifles, detectives, stool pigeons were hunting him. And the people who had read the story in the newspapers and looked at his picture, they too, were hunting him. 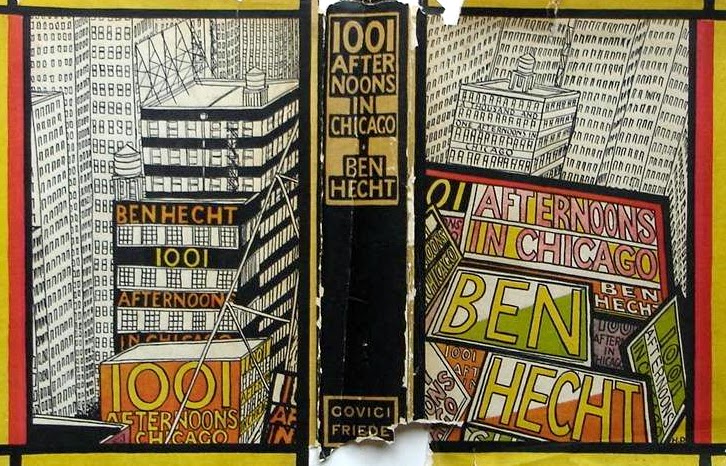 Tommy O’Connor looked out of the smeared window of the room in which he sat and stared at the snow. A drift of snow across the roofs. A scribble of snow over the pavement.

There were automobiles racing through the streets loaded with armed men. There were crowds looking for a telltale face in their own midst. Guards, deputies, coppers were surrounding houses and peering into alleys, raiding saloons, ringing doorbells. The whole city was on his heels. The city was like a pack of dogs sniffing wildly for his trail. And when they found it they would come whooping toward him for a leap at his throat.

Well, here he was—waiting. It was snowing outside. There was no noise in the street. A man was passing. One of the pack? No. Just a man. The man looked up. Tommy O’Connor took his face slowly away from the window. He had a gun in his pocket and his hand was holding it. But the man was walking away. Huh! If the guy knew that Lucky Tommy O’Connor was watching him from a window he’d walk a little faster. If the guy knew that Lucky O’Connor, who had busted his way out of jail and was being hunted by a million people with guns, was sitting up here behind the window, he’d throw a fit. But he didn’t know. He was like the walls and the windows and the snow outside—quiet and peaceful.

“Nice boy,” grinned Tommy O’Connor. Then he began to fidget. He ought to go out and buy a paper. See what was doing. See what became of Mac and the rest of the boys. Maybe they’d all been nabbed. But they couldn’t do him harm. On account nobody knew where he was. No pal. No dame. Nobody knew he was sitting here in the room looking at the snow and just thinking. The papers were probably full of cock-and-bull stories about his racing across the country and hiding in haystacks and behind barns. Kid stuff. Maybe he should ought to of left town. But it felt better in town. Some rube was always sure to pick out a stranger beating it down a empty road. And there was no place to hide. Long, empty stretches, where anybody could see you for a mile.

Better in town. Lots of walls, alleys, roofs. Lots of things like that. No hare-and-hounds effect like in the country. But the papers were probably full of a lot of bunk. He’d take a walk later and buy a few. Better sit still now. There was nothing harder to find than a man sitting still.

Tommy O’Connor yawned. Not much sleep the night before. Well, he’d sleep tonight. Worrying wasn’t going to help matters. What if they did come? Let them come. Fill up the street and begin their damn shooting. They didn’t think Lucky Tommy was sucker enough to let them march him up on a scaffold and break his neck on the end of a rope. Fat chance. Not him. That sort of stuff happened to other guys, not to Lucky Tommy.

Snowing outside. And quiet. Everybody at work. Funny about that. Tommy O’Connor was the only free man in the city. There was nobody felt like him right now—nobody. Where would he be exactly this time a week from now? If he could only look ahead and see himself at four o’clock next Monday afternoon. But he was free now. No breaking his neck on the end of a rope. If worst came to worst—if worst came to worst—O’Connor’s fingers took a grip on the gun in his pocket. They were hunting him. Up and down the streets everywhere. Racing around in taxis, with rifles sticking out of the windows. Well, why didn’t they come into this street? All they had to do was figure out: Here’s the street Tommy O’Connor is hiding in. And that looks like the house. And then somebody would yell out: “There he is! Behind that window! That’s him!” Why didn’t this happen?

Christmas, maybe, he’d call on the folks. No. Rube stuff. A million coppers would be watching the house. But he might drop them a letter. Too bad he didn’t have any paper, or he might write a lot of letters. To the chief of police and all the head hunters. Some more rube stuff, that. They could tell by the postmark what part of the city he was hiding in and they’d be on him with a whoop.

Funny how he had landed in this room. No plans, no place in particular to head for. That was the best way. Like he’d figured it out and it turned out perfect. Grab the first auto and ride like hell and keep on changing autos and riding around and around in the streets and crawling deeper into the city until the trail was all twisted and he was buried. But he ought to shave his mustache off. Hell. What for? If they came whooping into the street they’d find him, mustache or no mustache. But what if he wanted to buy some papers?

It was getting darker now. The snow was letting up. Just dribbling. Better if it would snow a lot. Then he could sit and have something to watch—snow falling on the street and turning things white. That was on account of his headache he was thinking that way. Eats might help, but he wasn’t hungry. Scared? No. Just waiting. Hunters winding in and out like the snow that was falling. People were funny. They got a big thrill out of hunting a live man who was free in the streets.

Dark now. But the guys hunting him weren’t going to sleep. Lights were going on in the windows. Better light up the room. People might notice a dark window. But a lighted one would look all right. It was not snowing any more. Just cold.

Well, he’d go out in a while. Stretch his legs and buy the papers and give them a reading. And then take a walk. Just walk around and take in the streets and see if there was anybody he knew. No. Rube stuff, that. Better stick where he was.

Lucky Tommy walked around in the room. The drawn window blind held his eye. Wagons were passing. What for? Yes, and there was a noise. Like people coming. Turn out the light, then. He’d take a look.

Tommy O’Connor peeled back the blind carefully. Dark. Lights in windows. Some guys on the corner. Hunting him? Sure. And they were coming his way. Straight down the street. They were looking up. What for? A gun crept out of Tommy O’Connor’s pocket. He pressed himself carefully against the wall. He waited. The minutes grew long. But this was the hunt closing in. They were coming. Black figures of men floating casually down the street. All right—let them come.

Lucky Tommy O’Connor’s eyes stared rigidly out of the smeared window at a vague flurry of figures that seemed to be coming, coming his way.