From the Turntable Dept.: My mixed bag of CD reviews includes these entries from 1991. The Gould disc is still available in reissued form; the Ives disc can be had from third-party sellers via Amazon, priced from $3.50 to $100; Sousa CDs also are out there, but all three discs are available as MP3 downloads. So there’s hope for keeping hold of this music.

GLENN GOULD’S CONDUCTING DEBUT is a depressing reminder of his too-short career. He died in 1982 at the age of fifty, a couple of months after recording Wagner’s “Siegfried Idyll” as leader of an ensemble of 13 musicians. 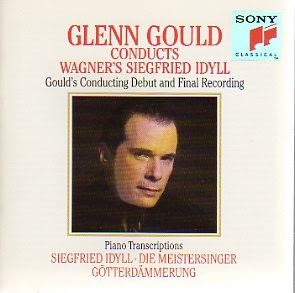 They’re the most interesting aspects of this recording (which probably is why they were released earlier). Gould rendered the Act I Prelude of “Die Meistersinger” and two linked sections from “Gotterdammerung” (“Dawn” and “Siegfried’s Rhine Journey”) as well as the “Siegfried Idyll” because, as he put it, he wanted some Wagner to play on the piano.

Each of these pieces achieves a transparency you wouldn’t associate with big Wagnerian opera, and in the hands of Gould the performer you’re aware of every nuance that’s been created. So effective are the transcriptions that it’s hard to hear, at first, that anything has been changed.

Twenty-four minutes of orchestral music doesn’t allow an easy judgment of a conductor. It sounds very promising, a performance as meticulously crafted as any of Gould’s piano recordings, and serves best of all to highlight the incredible job he does at the keyboard at the finish of the recording.

ALTHOUGH IT’S HARD TO IMAGINE two more disparate musical spirits than Ives and Sousa, they represent two of the many extremes of American music while sharing a common background. 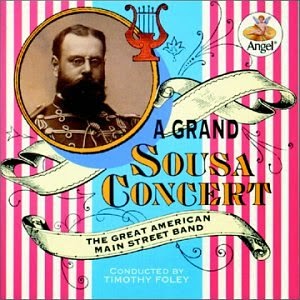 John Philip Sousa (1854-1932) grew up in Washington, D.C., son of a Marine Band
trombonist. Charles Ives’ (1874-1954) father was a bandleader in Danbury, Conn. (and served as the youngest bandleader in the Union Army during the Civil War).

Although Sousa became famous during his lifetime for the 136 marches he wrote (when he died, there were unfulfilled requests for 500 more), he wanted to be respected for his songwriting work.

Ives wrote trunks full of difficult music early in his life, but became known as a crack insurance salesman. When the musical world finally discovered his work, he had long since stopped writing.

Both composers absorbed everything around them during that musically fertile period of the end of the 19th century, when music-making still called for active participation.

The “Grand Sousa Concert” that Timothy Foley put together in a splendid-sounding digital recording is a program that intersperses a handful of the favorite marches with a lesser-known variety of Sousa works, including a tango (“The Gliding Girl”), the “Mikado March,” “The Presidential Polonaise” and a couple of waltzes.

Early trumpet and drum marches give the recording a nice texture variety, and don’t miss the peal of an exact replica a Philadelphia’s Liberty Bell in “The Liberty Bell.”

The Nonpareil Wind Band, formed last year, makes its recording debut with this collection. They give these works not only a feel of authenticity but also a spirit of fun. 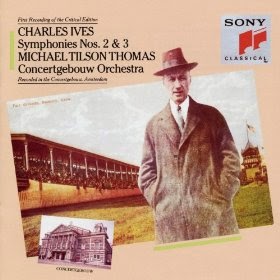 Listen to Tilson Thomas’ recording of Ives’ Symphony No. 2 with fresh ears. One of his best-known orchestral works, it makes its recording debut in an authentic version put together under the auspices of the Charles Ives Society. It’s not radically different from older recordings, but some orchestral textures an performance tempi have changed, and you’ll hear bits and pieces that weren’t there before.

The Symphony No. 3, which won the composer a Pulitzer Prize forty years after it was written, doesn’t have the same crowd-pleasing razzmatazz as its predecessor, but it’s a gorgeous, meditative work that grows with repeated exposure. Subtitled “The Camp Meeting,” it’s another of Ives’ attempts to recreate the pastoral musical experience of his boyhood.

Tilson Thomas was a protege of Leonard Bernstein, who conducted the premiere of the Symphony No. 2, and he has been involved with the music of Ives for many years. His performances are measured, thoughtful experiences that never let loose with the passion Ives deserves but nevertheless offer a meditative trip through the music, and are as good as any recordings on the market.