From the Vault Dept.: What with jalapenos appearing in the most prosaic dineraunt dishes, hot peppers have made significant inroads into American cooking since I wrote the piece below in 1992.

“ONE ENGLISH TRAVELER temporarily paralyzed by the pepper’s bite in South America described it as ‘a lash from Lucifer’s forked tail.’” Of all the many dining experiences, fooling with peppers can be the most devilish. To the querulous it looks like a rite of pure masochism. Yet the devotees, who are many, collect those colorful fireballs with the single-mindedness of addicts. 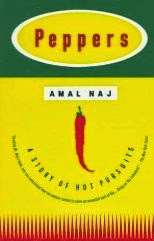 In his thoughtful study of the phenomenon, Peppers (from which the above quote was taken), Amal Naj describes his method of breaking in newcomers: “I prepare the guests with tales of the pepper’s mysterious an beneficial attributes and implore them with an evangelical pronouncement: ‘All it takes is an open mind.’”

“The initiation works if the uninitiated has an open mind and faith – the sort of frame of mind recommended for prompting God to reveal Himself.”

Can any other foodstuff suggest such blatant extremes?

Let me confess at the outset that I’m a pepper addict. It’s a bane in my household, where I’m inclined to spice meals to an extent that my wife howls in a combination of pain and derision. Am I abashed? No: I exhort her to join me in my addiction.

Mine began nearly twenty years ago when I was a waiter at a snooty Westchester County restaurant. Most evenings leave you too wired for sleep, so one night the chef, a talented but insane Aryan, suggested a tour of area bars. We ended up at an all-night joint in Portchester, a hole-in-the-wall called, simply, “Texas,” where he bet me five bucks that I couldn’t eat a bowl of chili con carne.

Couldn’t eat a bowl of chili? I took the bet.

There’s a good reason that hot peppers are described as a religious experience: to a first-timer, the pain is unprecedented but carries an after-effect so oddly pleasurable that some form of transubstantiation must have taken place.

Thanks to my determination to win the bet, I plowed through this bowl of murderous chili; by the end of it, I was sweating, panting, mentally muddled and ready for more.

“A pepper eater doesn’t simply like the bite of the pepper; he years for it. He may look forward to a meal to satisfy his hunger, but it’s the prospect of the pepper accompanying his every bite that cheers him and makes eating a new indulgence every time.” That’s also from Peppers (Alfred A. Knopf, 245 pp., $23.00), which is a terrific handbook for pepper fans who want to learn about the history and styles of their favorite fruit (which is the pepper’s correct classification).

Naj, a native of India who now works for the Wall Street Journal, confesses at the outset that he grew up disliking peppers, which distinguished him from the rest of his family. It was only while at school in Ireland, eating the bland food of that country, that he developed a nostalgia-tinged interest in spices and rushed headlong into what is now a comfortable addiction.

This isn’t a guide to identifying peppers, or a pepper-intensive cookbook (but see below); instead, it cleverly combines good research and appropriate anecdotes to follow the spread of spicy food. Naj traveled throughout Central and South America alongside botanists seeking the origins of the varied species; he spent time in Louisiana to profile the McIlhenny Company, makers and protectors of Tabasco Pepper Sauce, and the long history of lawsuits and other acrimony that has besieged the sauce’s history.

You’ll have no doubt of the beneficial effects of hot peppers, which has prompted even noted physicians to proclaim their benefits. As one points out, the substance that gives peppers their sting, capsaicin, is related to the principal chemical in Robitussin and Sudafed.

But you won’t find many doctors prescribing it, says Los Angeles School of Medicine professor Dr. Irwin Ziment. “In the organized pharmaceutical industry, the modern medicine men are very worried about using food as medicine, because it is old-fashioned.” He cites the example of the man who recommended bran as intestinally salutary. “Before he was proven right, he had to deal with a lot of ridicule.” 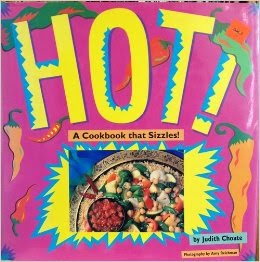 Whether you’re a pepper fan or not, this book will incite you to try some. Do so under the supervision of Hot!, a new cookbook by Judith Choate (Crown Publishers, 127 pp., $25). It’s a slim, good-looking volume that can’t decide whether it wants to be on your coffee table or in your kitchen.

The graphic design reflects the explosive content of the recipes with all the subtlety of a terrorist bomb. Color dribbles onto the glossy pages in pastel and neon shades of red, orange and green.

Although this is a how-to, not a why-is-it-done-this-way, Choate straddles a fair line between skilled preparation and pandering to the microwave set. She explains peppers and spices in the front of the book, provides recipes for some basic blends and sauces, and then we’re off on a journey through various courses, collected from all over the world. And every recipe in this book is good for you.

It’s not all horribly hot, either. The recipes call for different peppers, which have many different levels of heat, and invite you to sample these dishes at varying hotness levels. There’s also a section on cool foods to balance the meal, including cucumber yogurt with mint and cilantro, citrus vinaigrette and one of my favorites, lassi, an Indian yogurt-based drink.

Otherwise, here’s where you’ll learn to make gado gado, an Indonesian favorite with tofu and vegetables, served with warm peanut sauce; turkey mole, which combines chiles and chocolate into a pungent sauce; bobotie, a Caribbean lamb casserole flavored with curry and tomatoes, and even such odd items as the Chinese “ants climbing a tree.”

Believe it or not, hot peppers are one of the simplest cooling devices for a hot day. Accompany one of these recipes with a good beer and you can forget about air conditioning.