From the Vault Dept.: Yesterday’s review of PJ’s Bar-B-QSA referred to the review I wrote 27 years ago. Here it is.

A PLUME OF SMOKE leads you to six large vats of smoldering charcoal. The chef is wielding huge wire grills, built to enclose a couple dozen chickens or hunks of ribs. A grin on his face, ruddy from the heat, as he swabs the meat with marinade. 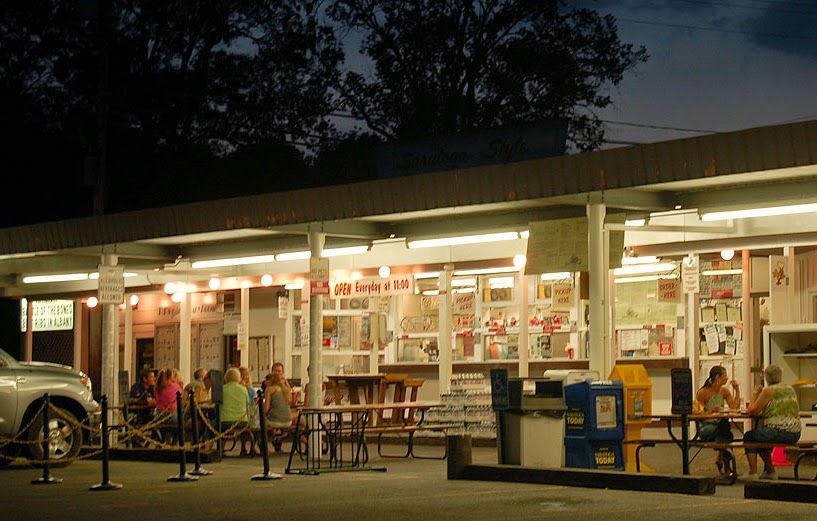 He’s known as P.J., and he’s at work on what he terms Saratoga-style chicken.

“The recipe was developed at Cornell about 40 years ago,” he explains. “I wanted to call this something other than just `barbecued chicken.’ So it’s now Saratoga-style. Why not? When I expand, people will know where I came from.”

P.J.’s has been serving up plates of great barbecued bird for four seasons just south of the Route 9 entrance to SPAC, but the business began as a catering service – you’ve seen him year after year at the Altamont Fair.

“My wife and I used to do this just for parties, and we thought it would be nice to try this, too.”

As he works, he creates his own best advertisement: the smell of the roasting meat.

Barbecued chicken can be many things, most of them dull or inedible. This chicken is different. We stopped off en route to SPAC (as we do fairly often) for a quick dinner, joining the fast-moving line to place our orders at the window.

Befitting the season, it’s an outdoors operation. Befitting the climate, there are tables in an inside dining area. Study the menu – it hangs on the wall – and choose a meal of chicken or ribs, complete dinner or assembled a la carte.

The half-chicken dinner, at $5.25, comes with fries and your choice of baked beans or cole slaw. A monster portion of ribs (this was my choice) is $9.20 with fixin’s. Subtract a couple of dollars for a la carte.

Back to the chicken. My wife likes to plunge into the meal with both hands and a Wet-Nap, so she was removing and eating the tasty skin even before I had a chance to get at some. But the flavor, redolent of lemon, goes well below the surface in this preparation. Cooked until firm, exceedingly tender, every bit of the chicken meat has a touch of the seasoning.

“I’m basting it constantly,” P.J. explained. And he takes his time in cooking it, too.

The ribs, another get-you-fingers-messy dish, are cooked in a tomato-based sauce. Meat leaves the bone with little protest, and there is something satisfyingly prehistoric about turning the little bones in your hand whilst gnawing them clean.

(Which gave rise to an ongoing discussion Susan and I have: I believe that to be a self-respecting carnivore, a meat-eater should be required to slaughter his own prey every now and then. She shudders at the thought, except when considering chickens. “They’re stupid, ugly creatures,” she declares. “I wouldn’t mind beheading them.”)

The menu is limited, as it should be in an operation like this. French fries are baby shoestrings, cooked until properly translucent. The baked beans are flavored with molasses, the cole slaw isn’t drowned in mayo – in fact, it’s dressed with oil and vinegar.

And there’s fresh corn on the cob available, so bring your dental floss.

No roadside stand is complete without soft ice cream, and P.J.’s can fix you up with a cone or a simple sundae.

In four years, it’s become a Saratoga institution, and nothing attests to it better than the fuel statistic: they go through 20 tons of charcoal in a season.