Guest Blogger Dept.: Another entry from Robert (“Come on over here and take a bow, Bob!”) Benchley, on a topic never more timely than in late summer, when your porch light is obscured by a frantic, buzzing multitude.

IN A RECENT BOOK ENTITLED, “The Psychic Life of Insects,” Professor Bouvier says that we must be careful not to credit the little winged fellows with intelligence when they behave in what seems like an intelligent manner. They may be only reacting. I would like to confront the Professor with an instance of reasoning power on the part of an insect which can not be explained away in any such manner. 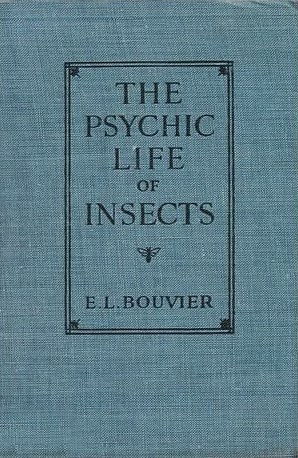 During the summer of 1899, while I was at work on my treatise “Do Larvae Laugh,” we kept a female wasp at our cottage in the Adirondacks. It really was more like a child of our own than a wasp, except that it looked more like a wasp than a child of our own. That was one of the ways we told the difference.

It was still a young wasp when we got it (thirteen or fourteen years old) and for some time we could not get it to eat or drink, it was so shy. Since it was a, female, we decided to call it Miriam, but soon the children's nickname for it—“Pudge”—became a fixture, and “Pudge” it was from that time on.

One evening I had been working late in my laboratory fooling round with some gin and other chemicals, and in leaving the room I tripped over a nine of diamonds which someone had left lying on the floor and knocked over my card catalogue containing the names and addresses of all the larvae worth knowing in North America. The cards went everywhere.

I was too tired to stop to pick them up that night, and went sobbing to bed, just as mad as I could be. As I went, however, I noticed the wasp flying about in circles over the scattered cards. “Maybe Pudge will pick them up,” I said half-laughingly to myself, never thinking for one moment that such would be the case.

When I came down the next morning Pudge was still asleep over in her box, evidently tired out. And well she might have been. For there on the floor lay the cards scattered all about just as I had left them the night before. The faithful little insect had buzzed about all night trying to come to some decision about picking them up and arranging them in the catalogue-box, and then, figuring out for herself that, as she knew practically nothing about larvae of any sort except wasp-larvae, she would probably make more of a mess of rearranging them than as if she left them on the floor for me to fix. It was just too much for her to tackle, and, discouraged, she went over and lay down in her box, where she cried herself to sleep.

If this is not an answer to Professor Bouvier's statement that insects have no reasoning power, I do not know what is.