From the Vault Dept.: In the 1980s, I had an office on Schenectady’s Barrett Street. A few doors away was the office of cartoonist John Caldwell, whose work I’d admired long before I was able to meet him. And his prestige has continued to climb since I wrote the piece below in 1988; you’ll find him in Playboy, The New Yorker, Rolling Stone and The Wall Street Journal – and once, during my very brief tenure as a board member of the Schenectady Symphony Orchestra, I talked John into illustrating a series of display ads for which I provided copy. Apparently they lacked the gravitas a big-time symphony orchestra requires, and the campaign was squelched. I offer one of John’s brainstorming drawings below.

CARTOGRAPHER AND CARTOONIST are encyclopedic neighbors, and to shift his career from one to the other took John Caldwell a few years and countless rejections. 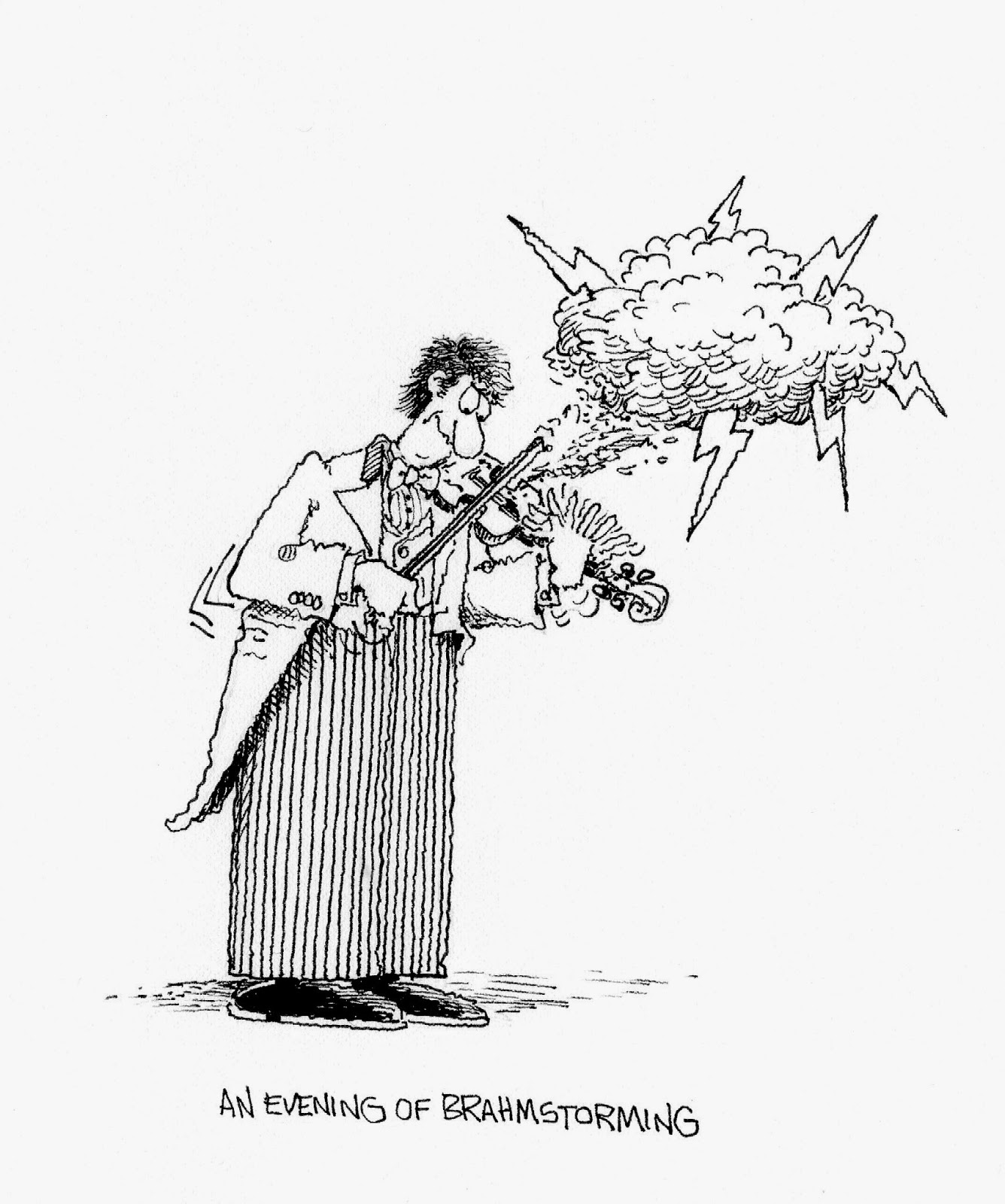 But he’s a professional cartoonist now, enjoying the success that comes with a nationally-syndicated panel (one daily and four on Sunday), appearances in the top magazine markets and several books, the latest of which, tersely titled Caldwell, will be signed by the artist from noon to 2 p.m. tomorrow (March 5) at the Open Door, 128 Jay Street, Schenectady.

“You like the title?” he asks. “I wanted to call it Iococca, but my publisher said I couldn’t do that.”

Caldwell lives with his wife and daughter in Ballston Spa but keeps an office in downtown Schenectady, on an atmospheric side street that might have come out of one of his drawings.

He’s been selling drawings since the late ‘60s, during a time when the cartoonist’s tradition was changing from the precise line of the New Yorker regulars to the anarchic setups of George Booth and others.

“Kliban was really the first to do that,” Caldwell observes. “He started pushing the panel way beyond what had been done before. A lot of the humor took place outside of the panel, as if we came in at the wrong moment. There’s one that Jack Ziegler drew with a guy in a hut carving stones, and there are piles and piles of carved stones all around him, and the caption reads, ‘...Meanwhile, back at Cindy’s apartment...’”

Caldwell’s own obsession with cartoon tradition is signaled by the cover of his new book: a desert island gag, which may be the most-used set-up in cartooning history. “I don’t mind messing with the clichés if I can do something different with them,” he says. Thus you will find within the book a desert island gag based on Wheel of Fortune, another that recycles a classic Three Stooges joke, and one taking an unlikely look at correspondence studies. And those are just within the first few pages.

Although his work is compared to Gary Larsen’s “Far Side,” it’s not an appropriate comparison. “Larsen likes to do the old switcheroo, along with a lot of anthropomorphic gags. That’s not my style.”

He’s 42 but has the impish energy of half that age. His drawing table has the requisite templates and rulers of the draftsman, but the finished line will be a typical Caldwell squiggle. Which reflects the style of his work: apparent chaos that’s been carefully planned.

“I’m not really thrilled about drawing. I mean, you won’t find a lot of crowd scenes in my cartoons. And anything that looks intricate, I can guarantee you, was done first thing in the morning.”

But the panel – and the individual cartoons that are published in Playboy, National Lampoon, Writer’s Digest and many other magazines – don’t depend upon intricate drawings to send home the joke. It’s a relationship between text and image, because Caldwell is very word-oriented.

He grew up laughing at essayists. “Robert Benchley is still one of my favorites, and I like all of those Algonquin Round Table people. I’m also a big fan of Stephen Leacock, a turn-of-the-century Canadian writer. I really enjoy the wordplay of S.J. Perelman’s work, which leads to the Marx Brothers, whom he wrote for. All of their movies are great.”

The influence can be seen in the wordplay that’s characteristic of Caldwell’s work. A painter is feeding a canvas to his food processor to prove himself “undisputed master of cuisine art” while “Lifestyles of the Rich and Famished” presents a man eating from a tub labeled “Bucket o’ Caviar.”

The panel requires him to turn out 520 cartoons a year; on top of that, he is on a retainer from Writer’s Digest to illustrate the columns in that magazine. Then there are the free-lance submissions and occasional bits of advertising work. But it’s the panel that captures most of his attention as he walks that line – as squiggly as one of his panel borders – between what the newspapers expect and what his sense of humor delivers.

“Newspapers have always been conservative about the comics page. You’ll have three or four adventure strips, a romance strip, a strip with bubble-nosed characters, something with a cute dog, a bratty kid, and don’t forget the Jumble.

“I’m syndicated by King Features, which carries hundreds of strips and panels. When the salesman goes into the editor to promote me, he’s got a ton of other stuff to offer if they turn me down. So I’m happy to be doing as well as I am.”

Which translates into about 55 daily papers across the country. “A lot of them are in southern California, including the L.A. Times, and I know there are some in Texas. When I started, in Oct. 1985, I was picked up by 27 papers. Coincidentally, my panel was introduced the same day as ‘The Far Side.’”

About two years ago, Caldwell added lecturing to his resume, and now presents workshops on cartooning-related subjects; recent appearances were in New York and Detroit. “My panel runs in the Detroit Free Press,” he says, “where I spoke last October about marketing your art. It was kind of nice to have people come up afterward asking me to sign the panel in that day’s paper.

“I met a lot of people who felt that they knew me just because they’ve been following my work, which is kind of nice. Here I’m used to people who come up to me and say, ‘Remember me? I used to come into your father’s barber shop.!’”

Reminiscent of that shop, which was in John’s native Cohoes, is the barber’s chair in his office that sits across the room from his drawing table. Steel shelves on one side of the room are clogged with books and back-date magazines; the walls are cluttered with posters and photographs. Some have obvious sentimental value: there are glossies of Caldwell and fellow cartoonists, including Mad magazine co-founder Harvey Kurtzman; others figures, such as William Bendix and Slim Whitman, no doubt cover crumbling plaster.

His day begins with a workout at a local health club; he’s in the office by 9 for the two hours of peace before phone calls start coming in. “For some reason, people in New York begin calling right at 11. On the dot.”

With the publication of his new book – and any resultant publicity – will come the stream of inquiries from would-be cartoonists. “The trouble with most of them is that they give it up after a year, a year and a half. You have to be thick-skinned: as the markets continue to dwindle, this may be the business with the most rejections.”

He found a way to support himself during his own apprenticeship that may not please the State of New York: “When I got out of college I went to work for the state Department of Transportation as a cartographer. I wangled my way into the art department where I drew those little brochures they hand out at Thruway rest stops, you know, ‘Sailing the State’s Canal System.’ that kind of thing.

“I was a typical civil servant, grade eight, with a job that had, how shall I say it, a certain amount of free time involved. So I’d sit in my cubicle working on gags, getting free-lance material ready to send out. It was a comfortable living; I left in 1974 to go on my own, and of course I lost all those benefits: paid vacation, sick leave, personal days...”

Aspiring artists tend to work a variety of jobs while weaving along the road to success; Caldwell recalls a succession of them in and around Cohoes while in high school. “I worked driving a produce truck for a while, making $18 a week. I loved it. I’d also work in this guy’s stand, and picked up a lot of character studies that way. In winter we sold Christmas trees, trying to keep warm by sitting in a black ‘49 Dodge.

“I was a handkerchief folder for Cluett-Peabody in Troy one summer; I also worked cleaning vats and wringers for the Mohawk Paper Mill. I’ve often thought about doing a book just about factory life and that feeling of being a cog. You make something year after year and you’ve got no idea how it fits into the whole.

“Remember the Montgomery Wards in Menands, that building that looks like the Daily Planet? I was a short order cook at the Buffeteria for a while. I made a lot of friends there, friends I still hear from.”

He is working to expand into prose; a recent book, his Book of Ultimates, demonstrated his talent for the comic essay. But he’s still waiting for a publisher to go for one of his ideas.

“Occasionally I’ll get a call from my agent, Steve Axelrod, to work on someone else’s book. I’m his only humor person – he’s got lots of other writers, but I’m the funny one. Well, remember that L.L. Bean parody, Items from Our Catalogue? A couple of guys approached Steve with an idea for a similar book, but it would be a parody of computer-supply catalogues. So he sets these guys up with a meeting with me.

“I go down to New York and meet them at a bar. You’re talking about guys wearing huge Rolex watches and foreign suits that cost more than my car.

“‘We’ve got the ideas,’ they tell me. ‘All you have to do is write it.’ Fine. They pull out a copy of Items from Our Catalogue and say, ‘We want it to be just like this, only – ’ and here this guy flips to the back of the book – ’only there won’t be any coupon. You won’t be able to order anything from it.’

“I look at one guy. I look at the other – I think I’m being had! But, no, they’re dead serious. They really thought you could order from that catalogue!