Yesterday I confessed to owning an “Alvin and the Chipmunks” record as a child. I had no choice in the matter; like so many kids’-world acquisitons, it was foisted upon me by a well-meaning relative. Probably not my mother, because I suspect she would have had little tolerance for the strident sound of speeded-up voices. But she did lay upon me a record that would prove a favorite, something that arrived in the mail one day and to which I clung like Croesus clutching gold. I’ll come back to this topic, but first let me reprint the following book review, which ran about five years ago. 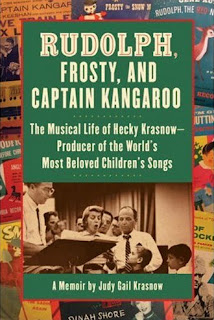 THE FINEST OF ALL children's records was one I grew up on, which shouldn't be surprising: Kids cultivate prejudices devoid of discrimination. But I lucked out, insofar as the record I most enjoyed was a '50s LP of Stanley Holloway singing “Gobbledegook Songs.”

I played that record to death, but replaced it a decade ago with another scratchy copy (it has yet to hit CD, and better copies of the LP sell for $60 to $80). I’ve have inflicted it not only on my own daughter but also the kids of others, and always with enthusiastic results. The genius behind the recording was Hecky Krasnow, whose life is recounted in Rudolph, Frosty, and Captain Kangaroo: The Musical Life of Hecky Krasnow (Santa Monica Press; 408 pages; $24.95), the new biography by Judy Gail Krasnow, his daughter.

Krasnow was a violinist whose book about children's music caught the eye of legendary Columbia Records producer Goddard Lieberson, who hired him in 1949 to revitalize that label’s kid-disk department. Krasnow’s first act was to select a song from the slush pile and convince a reluctant Lieberson not only to authorize its recording but also to approve the unlikely choice of balladeer Gene Autry to sing it – and thus was born Columbia’s first platinum hit, “Rudolph the Red-Nosed Reindeer.”

Krasnow went on to record not only Autry in many more songs (“Frosty the Snowman” became another unexpected hit) but also attracted such talent as Burl Ives, Dinah Shore, and Rosemary Clooney to create children’s records – and Krasnow also engineered Clooney’s early, oddball, embarrassing hit “Come On-a My House.”

Through it all, Columbia raked in the royalties and many singers and songwriters grew rich – but Krasnow, who resisted payola and other shady deals, never achieved more than a modest living. And his name is hardly the household word you’d expect as a result of those achievements.

This is a serious wrong righted by the book, which celebrates both the father’s achievements and the fascinating life the daughter led, growing up in progressive musical circles in the ‘50s and ‘60s.

Judy Krasnow meets heroes like Gene Kelly and Jackie Robinson, attends a party at the tropical rain forest-themed penthouse of “Tubby the Tuba” composer George Kleinsinger as monkeys and snakes run wild, sings backup on recordings with Captain Kangaroo, flees the 1949 Peekskill riot, and much, much more, all of it entertainingly told (which isn’t surprising, as the author is now a successful children’s entertainer).

“Children watching `Sesame Street,’” she writes, “absorb already-made images dancing across the screen. In contrast, the audio experience of listening to records developed mental skills through which the child created his or her own images, a skill that goes hand in hand with learning to read.”

It would be nice to report that Hecky Krasnow’s work has stood the test of time, but so many of those projects – albums created to educate and entertain without selling or pandering – have been out of print for decades, so it’s difficult to tell. His life story, however, remains inspiring, and this book at least awakens the hope that we might be able to find those recordings again. At the very least, a scratch-free CD of those wonderful “Gobbledegook Songs.”

I’m back. First an oddball connection. Those annoying chipmunk recordings were the brainchild of Ross Bagdasarian, who, with his cousin, William Saroyan, wrote the aforementioned “Come On-a My House.”

More connections: Hecky Krasnow’s violin teacher was Leopold Auer, grandfather of actor Mischa – although Auer’s most famous pupil was Jascha Heifetz. During the 1940s, Heifetz made a number of tours and recordings with pianist Milton Kaye. Kaye is the pianist on “Gobbledegook Songs.”

The record appears to have been recorded in 1957, which would make sense: Holloway was appearing on Broadway in “My Fair Lady” at the time, but had a penchant for novelty songs. The songs were written by Leo Israel and Hecky Krasnow and cover such delightful topics as “Sven Svenson’s Tree,” “Why the Giraffe Laughed,” and the title song, offered below:

“Gobbledegook Songs” seems to have debuted on the Judson label, which was the LP version I received as a child. Kaye plays piano, organ, and celeste, and Moe Goldenberg is credited with “drums, tympany, odds-and-ends.” It’s relentlessly cheerful, opening with a booming “Bouncing Ball” in which Holloway shouts, “Hey! Mister!” before singing in his unmistakable fashion, “Did you see Johnny’s ball go bouncing down the street?” From such small requests can memorable songs erupt.

Frederic Ramsey, Jr., had this to say in a 1958 Saturday Review review:


“Nothing but back-sliding, with not a single speck of Significance in it,” is the conspiratorial promise tendered to child listeners on the wrapper of Stanley Holloway’s “Gobbledegook Songs” (Judson J3026, 12", $3.98). Mr. Holloway is known elsewhere as “Mr. Doolittle” in “My Fair Lady.” His goings-on with such non-stuffy material as “The Gobbledegook,” “The Lion Tamer,” “The Frog, the Duck, the Fish,” “The Elephant Alphabet,” and “The Dancing Bear,” are larking and amiable. On the record, he is supported by a two-man band . . . Children might like it.

This child certainly did.

After years and years, suddenly today a song from that album started running through my head. I too played that record over and over. For me the best song was about Johnny's ball "Ball of blue with red upon it, bouncing quickly down the street." At least, that is the way I remember it. I now live at the bottom of a very steep street and quite frequently some kid's ball comes bouncing down the street.

Thanks for helping my memory!

"Sven Svenson's Tree," "The Elephant Alphabet," "The Lion Tamer" and others delighted me as a child. I'm glad someone wrote this about the record. It's time to re-release it on CD.