Across the U.S.A. Dept., Sex Division: Here's what became the most widely read of the two dozen pieces I wrote for the Schenectady Gazette detailing aspects of a cross-country tour my wife and I took in 1989. For this one, she waited in the car while I conducted my research. 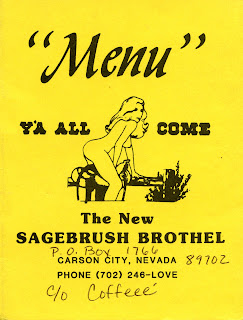 IT'S NOT IN THE Chamber of Commerce brochures, and you won't see signs of it on the main streets of the Nevada towns where the multicolored casino lights make three in the morning look like noontime.

If you've got your CB radio on, you might get your first inkling of it from this kind of message on channel 19: “Hey there, all you truckers. This is Dusty from Simone's and if you want to stop in Winnemucca we've got lots of nice hot coffee for you and can help you relax.”

To find Simone's you steer down Lower Baud Street into what looks like a long driveway, at the end of which is a cluster of five well-lighted buildings. My Place, The Villa Joy, Penny's Cozy Corner and The Pussycat complete the collection.

Nobody lounges out of the windows or beckons enticingly. You have to know where you're going and what you plan to do once you get there.

Prostitution is legal in most of Nevada simply because it was never made illegal. It has been outlawed in three counties – the ones that are host to Las Vegas, Reno and Lake Tahoe – because county planners didn't want to spoil the good, crime-free image of gambling there. In the other counties, a brothel must be at least 400 yards away from a school or church.

There are 36 such houses licensed throughout the state. Several guidebooks have been written and may be obtained (sometimes over the reluctance of sales staff) at the truck stops near the border.

And it's a lively border littered with billboards that suggest, with little subtlety, the pleasures that lie ahead. Ironically, many of the gambling houses of Reno and Las Vegas use well-defined images of women in their advertising.

After crossing the endless salt flats of Utah, any kind of break is welcome. Nevada just happens to push the point home with the least amount of subtlety. You're here to play slots or tables, stay at the lavish hotels and eat so-so food. (And, possibly, to visit bad wax museums – but we didn't find any in the north part of the state.)

Nevada at night, travelling by car, is several hours of lonesome darkness broken every 60 or 90 miles by an overly-lighted city. Slot machines are ubiquitous: they're even in the truck stops and grocery stores. After a lonely couple of hours looking at desert or looking at darkened nothing, a distant light is a beacon of welcome. You just wish it weren't so bright when you got to it.

Some travellers prefer that beacon to be red. Some locals, too – Nevada and its near neighbors are host to a number of military bases, and many bawdyhouse customers wear the telltale haircuts.

The places must be doing well, even in this age of renewed disease-consciousness. If you're in Las Vegas looking for a break from the tables, the Cherry Patch Ranch will send a limousine to fetch you. It's a 45-minute ride, and it's on the house. Or you can land your small plane in the nearby airstrip.

Reno and Tahoe customers shop in the Carson City area. The town of Dayton boasts three lavish stopping-places. The Moonlite Ranch, the Kit Kat Ranch and the New Sagebrush Ranch are just down the street from Sam's Saloon. It's notorious enough to attract not only a steady clientele but also the gawks of tour-bus onlookers. You're welcome to stop by each on your quest for paid companionship, but you might linger longest at the recently-built New Sagebrush, which offers a spa-like setting.

Present yourself at the gate and press the buzzer. You'll be admitted and greeted by a welcoming chorus of possible mates. Some of the establishments are intent on hustling you into an assignation; the New Sagebrush is more relaxed. Sit at the bar and enjoy a drink. Happy Hour lasts all of Monday and Tuesday and gets you served for a dollar – although drinks for the girls, and you'll be encouraged to buy them, are full-priced.

The decor in the lobby is borderline naughty, with plush and red and black the dominant characteristics; down the hall are the specialty rooms, where you can party with more abandon. The “V.I.P. Lounge” features a large bed covered with black satin, a chaise longue and TV-VCR unit. “This is for someone who wants to stay longer than an hour,” explains Brandy, conducting the matter-of-fact tour. The jacuzzi is in a health-spa-like room. Down another hall is a room with a sunken bathtub. “We also have a Fantasy Suite,” she says, showing off a room with red walls and a number of black satin-covered couches arrayed under dim track lighting. 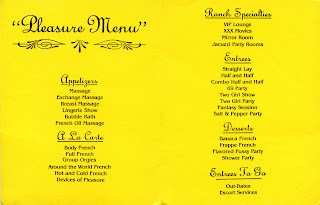 “What do you do in this room?”

Brandy smiles a professional smile. “Anything you want.”

Otherwise, the doors on the long halls lead to the rooms where the employees live and work.

The buzzer sounds. “Company, ladies.” The women line up to meet a party of five truckers passing through town. One is a regular who heads right for the bar; the others take a little more time to nervously exchange hellos.

“How're you doing, honey?” She calls herself Coffeeé (yes, three e's) and she's paying a lot of attention to the fellow at the bar, finally succeeding in persuading him to buy her a drink.

Behind the bar is the somewhat incongruous display of a Carson City Softball Association award right next to a gift certificate display: “Give the Gift of Pleasure,” the sign suggests.

The truckers are now all seated at the bar, but the banter is intermittent. After introducing themselves they haven't very much to say. It's a reminder that when sex is so obviously available, traditional male role- and games-playing serves no purpose. In fact, it is they who are getting the kind of attention they're accustomed to give.

And they're obviously not going to buy anything more than a beer or two, at least for the moment. The women drift back to the chairs and couches that line the lobby. Cigarettes are lighted. The tone of their conversation changes from professional to casual.

Once outside, fortified with beer-enlivened courage, the truckers move on to the Moonlite. The women watch this from the window and shrug. A customer is escorted down the hall and shown to the door by his consort. Another customer arrives and the professional smiles come one, the alluring small talk resumes. This could almost be one of those theme restaurants that costumes its female staff in too-short skirts and revealing blouses.

But unlike every such restaurant, billboard, commercial, product box, magazine spread, sit-com, record jacket, book or magazine cover – anything that uses sex to promote a product – there's no hypocrisy here. All that's being sold is sex. It's alarming to find that there are those who find it necessary to pay for something that's fairly simple to earn, but reassuring to see that it can be traded in a controlled environment.