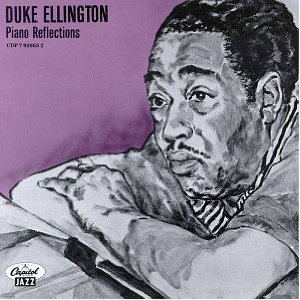 YESTERDAY WAS A BUSY yard-work day, so to relax at night I put on a Duke Ellington disc. Because I want nobody in my house to suffer from music deficiency, there are loudpeakers throughout. My daughter, who is fifteen, was doing schoolwork in the next room. I was startled to hear her humming along with the disc’s opening number, “Who Knows.”

“You gave me a copy of this a long time ago,” she explained. “I have it for bedtime listening. I also have it on my computer and my phone.” Incredibly to me, ever-fearing my tastes are freakish, she says it’s a favorite. Perhaps my own adoration for this record really did work it into my DNA.

The album is “Piano Reflections,” which Ellington recorded for Capitol Records in 1953, during his brief association with that label. I was about my daughter’s age when I was introduced to it, thanks to my friend Harry Minot, with whom I repeatedly listened to the odd, affecting array of Ellington tunes, many of them composed for the recording.

The LP version consisted of fourteen tracks; another (“December Blue”) was added for the CD issue. I’d become moderately familiar with the Ellington bands by the time I was introduced to this record, but to hear Duke at the piano backed only by bass and drums was revelatory. And very moving.

The uptempo numbers were initially the catchy ones. “Kinda Dukish” is a swinging essay that also served as an intro to “Rockin’ in Rhythm,” used as a program opener at many concerts (including the one I saw at Stratford, Conn., in 1974, three months before Ellington’s death.)

“Dancers in Love” is the catchiest, a number from Ellington’s “Perfume Suite” that also formed the basis of an odd George Pal “Puppetoon” featuring Duke at the piano with a light-footed group of anthropomorphic perfume bottles – and which, thanks to TV, probably was my first Ellington exposure.

Misnamed “Night Time” on the LP, the catchy rhythm of “Montevideo” is enhanced by the conga playing of Ralph Collier – a number that’s almost too busy, given the subdued nature of much of the rest.

“Who Knows?” and “B-Sharp Blues” are among the medium-tempo numbers, which set a groove against which the ballads play brilliantly. And we’re talking numbers like “Retrospection,” “Passion Flower,” “Melancholia,” and the perennial “Prelude to a Kiss,” which form the soul of this recording and draw me back again and again. I no longer can approach it with any degree of objectivity, so completely have I absorbed it over the years.

The sessions date from April 13 and 14, 1953, with Wendell Marshall on bass and Butch Ballard, drums, and Dec. 3 of that year, when Dave Black replaced Ballard. Ellington hadn’t been spotlighted in this manner before, so producer Dave Dexter deserves a lot of credit for persuading him into it.

Michael Cuscuna, of Mosaic Records fame, helped produce the CD reissue, and his name is a testament to quality. The sessions also form part of Mosaic’s out of print “Complete Capitol Recordings of Duke Ellington” CD set, but the tracks are split across discs and other 1953 sessions are chronologically interpolated. But I’m so attached to “Piano Reflections” that it’s a mark of personal progress that I’m not still hugging my jacket-split LP to my chest.

Duke Ellington went on to record a few more solo and small -group sessions. “Money Jungle,” a 1962 Blue Note session with Charlie Mingus and Max Roach (remastered by Cuscuna) is outstanding, and I’m partial to the mix of Ellingtonia and standards (“Summertime,” “Body and Soul,” and more) on the 1961 Columbia “Piano in the Foreground.” And for a strictly solo recording, Storyville’s “The Piano Player” includes, among other gems, Ellington’s solo-piano version of his suite “The River,” written for Alvin Ailey.